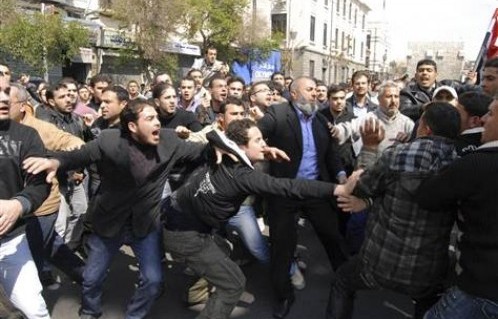 The last Friday of Ramadan held a lot of expectation for the opposition activists in Damascus. While protests have certainly picked up pace over the last month they still haven’t managed to unsettle the capital, the bastion of pro-regime support. So the opposition hoped that today would see a suitably dramatic finale to the holy month. Although initially it looked like it would be a relatively quiet Friday, a dramatic, and ultimately deadly, protest broke out during the late hours of one of Islam’s holiest nights.

During a tour of the capital after the midday prayers, it was clear that few protests had managed to gain enough momentum to beat the overwhelming security presence. In hot spots like Midan and Kafr Souseh, hundreds of shabeehah, the regime’s thugs, stand guard along with regular police officers and soldiers. Mukhabarat agents, the secret police, keep a watchful eye over everything, loitering in leather jackets next to their cars, occasionally barking orders into walkie-talkies. The shabeehah are better armed than on previous Fridays. Along with the usual batons and sticks many are also equipped with assault rifles and shotguns. A few carry riot gear. Pick-up trucks laden with paramilitary soldiers prowl the main streets of Midan.

But there is little sign of the opposition. Groups of 3 or 4, young men often dressed in white jalabiyahs, hang around leaning on cars, waiting for something to kick off but sufficient numbers never appear. Without a large group of protestors they wouldn’t stand a chance against the shabeehah. The few brave enough to start chanting are quickly beaten up and dragged off. An old bus parked beneath an underpass, its windows sealed with metal bars, acts as a holding cell for those unlucky enough to be arrested.

The lack of protestors is not surprising given the suffocating security presence. Abu Suleiman (not his real name), our guide for the day, explains that most of the residents of areas like Midan and Qaboun are committed opposition supporters: they have lost too many of their sons, experienced too much repression, to be anything but angry at the regime. But in recent weeks, the opposition movement in these key neighbourhoods has perhaps even diminished. While protests occur more frequently throughout the week , flaring up at unpredictable times and places, they are also smaller. After months of sweeping security operations, thousands of demonstrators have been locked away in Damascus’ secret prisons. The movement is currently short on participants.

But the move towards smaller protests is also, in part, a deliberate change in tactics. Small protests, which finish just as quickly as they appear, are a lot harder to track down and break up. The model is also being used in neighbourhoods where the opposition could never get away with large scale protests. A young activist heavily involved in the movement described to me a flash-mob which occurred along the Four Seasons Boulevard, next to the 5 star hotel of the same name and one of the wealthiest areas of Damascus. A small mosque is squeezed in between the boutique shops and trendy cafes, a token symbol of Islam and tradition next to all the consumerism and affluence. As the evening tarawih prayers finished, a group of no more than 25 started chanting anti-regime slogans, a daring display of opposition in the pro-Assad stronghold. They were quickly chased away by government supporters, apparently led by a general’s son who happened to be sipping a frappuccino in the Costa next door, but it would still have sent tremors through Assad’s support base in this fiercely loyalist part of town.

Along with small flash-mobs, the Damascus movement has also moved towards protests late at night and, as in the case of last Friday, very early in the morning. The last night of Ramadan is one of the holiest nights of Islam. Laylat al Qadr celebrates the first night in which Allah revealed the Quran to Muhammad and in recognition Muslims spend the night praying and reading from the Quran. The opposition movement in Damascus took advantage of the occasion to organise one of the largest protests so far seen in the capital. Activists reported that ‘thousands’ of demonstrators took to the streets but were soon confronted by security forces and pushed back into the al-Rifai mosque on the main Kafr Souseh roundabout. At this point the security crackdown turned particularly ugly. Armed shabeehah entered the mosque attacking worshipers as well as the 80 year old Imam, Sheikh Osama al-Rifai. Eyewitnesses described how the regime’s thugs damaged the prayer hall and even deliberately desecrated a Quran. One person was killed, several injured and about 150 arrested.

While Kafr Souseh has been the scene of previous demonstrations – as early as April 1 around 600 protestors locked themselves inside al-Rifai mosque – the size of the protest early Saturday morning was unusually large. The footage of thousands of demonstrators so close to the centre of the capital, as well the shocking images of the wounded Imam lying on a hospital bed, have already marked out the events of this Laylat al-Qadar as significant in the movement to overthrow the Assad regime.

But as we near the end of Ramadan, opposition activists will be assessing the gains of the past month. Although many have been willing to risk death or imprisonment, the protests over the past month in the capital will not have worried Mr Assad unduly. Damascus, comparatively quiet throughout all of the past 5 months of uprising, has experienced a few upsets during the holy month but for the most part life continues unaffected. Commerce is still relatively healthy and many of the city’s inhabitants remain in comfortable denial of the death and chaos that has swept across the rest of their country. While pressure is increasing on the regime, most significantly due to international condemnation and economic weakness, Assad maintains a vice-like grip on Syria’s capital.