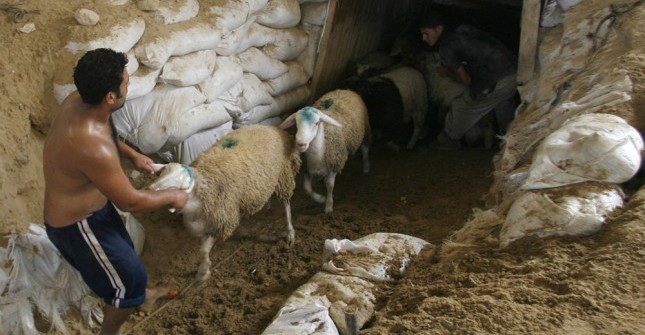 On September 17, 2012, Ismail Haniyeh, Prime Minister of the Hamas government in Gaza, made another appeal to his Egyptian counterpart Hisham Kandil to consider setting up a free trade area between Gaza and Egypt.

The reasonable idea would allow Egypt to support Gaza’s ragged economy while sparing Cairo the political fallout from destroying hundreds of tunnels that provide 1.6 million Palestinians a lifeline under a continued Israeli siege. Palestinians in Gaza rely on goods smuggled through tunnels and to a lesser extent United Nations handouts to survive.

“We explained the concept in detail (..) the idea is to alleviate the economic hardship in Gaza,” Hamas official, Taher al-Nono was then quoted in Reuters. Kandil promised to look into the matter, indicating that it was too early for a response.

However this proposal was introduced before and repeatedly after the September meeting. It should have at least served as the basis for a serious platform of discussion regarding future cooperation between Gaza and Egypt on this urgent matter. But Cairo neither responded nor offered an alternative to end Gaza’s seemingly perpetual misery.

Even worse, for several months now and notably since the deadly August 5 attack in Sinai by unknown assailants – which killed 16 Egyptian border guards – the Egyptian army has actively been destroying Gaza’s tunnels.

According to a Gaza-based economist Maher Al-Tabbaa, “30 percent of Gaza’s goods come from the tunnels.” But other estimates, cited by Reuters, place the food reliance on smuggling at 80 percent. Without tunnels, and no real, long term alternative, Gaza will delve deeper into poverty and the crisis will likely reach unprecedented levels.

But why is post-revolution Egypt maintaining the very policy of isolating Gaza which was first espoused by former Egyptian dictator Hosni Mubarak?

Despite grave humanitarian repercussions of the siege, the subject is essentially political. Following the demise of the Mubarak regime, a sense of euphoria was felt in Gaza and across the region that a revolutionary government – especially one headed by the Muslim Brotherhood – is likely to reverse an enriched legacy historically financed and guarded by American money and political leverage.

The price of the Camp David treaty signed between Egypt and Israel in 1978-79 was meant to turn Egypt into a permanent political asset for Washington and Tel Aviv in exchange for a fixed amount of money which arrives mostly in the form of military aid. Mubarak had indeed delivered and the late Egyptian intelligence chief Omar Suleiman was the personification of that American success.

When Israel imposed a siege on Gaza following Hamas’ election victory in 2006, it mattered little that Egypt and Gaza had a shared border. Israel seemed entirely comfortable that the Mubarak regime was on board, while Palestinians in the Strip subsisted between occasional war and economic hardship.

To suggest that Hamas orchestrated the murder of Egyptian soldiers in the Sinai – which served as the army’s cue to further cut off Gaza – is to have no understanding whatsoever of the collective psychology of Palestinians in the Strip who continue to see Egypt as an oasis of political hope and economic salvation. Moreover, the cultural and religious rapports between Gaza and Egypt – which administrated the Strip for decades between 1948 and 1967 – is easily discounted.

Overwhelmed by the persisting attempts at its removal from power, the Muslim Brotherhood and President Mohammed Mursi continue to approach matters concerning Palestinians with utmost caution.

Their detractors have dedicated much energy and time to smear Palestinians, Hamas and Gaza in much of Egypt’s privately owned media. Bizarre propaganda of completely besieged Palestinians in Gaza smuggling weapons and drugs to the Sinai is creating a state of confusion among many Egyptians regarding Gaza and its role in Egyptian security chaos.

Too timid to challenge the many forces at play in Egypt, Mursi’s government is offering little by way of helping Gaza overcome its isolation. This hesitance has proven costly. Using the pretence of protecting Egypt’s national security, the army is actively destroying the tunnels under the leadership of defence minister Gen. Abdel Fattah el-Sissi.

Reporting in Israeli newspaper Haaretz on April 6, Zvi Bar’el estimated that 250 tunnels were destroyed in March, while 76 were flooded with sewage, “after locating them by means of satellite information, probably in cooperation with the United States.”

‘Probably’ is an understatement, as the US government – and other western powers – invested much funds and expertise in ensuring that Gaza is fully quarantine. Throughout most of 2011, it was simply unthinkable in Gaza that Egypt would continue actively cooperating with western intelligence to keep Hamas isolated.

In 2012 and especially after the August attack in the Sinai, it became clear that whatever forces that were yielded by the January 2011 revolution, were simply too weak to impact reality on the ground. According to Haaretz, “Egypt’s political (and) military leadership (is) divided over support for Hamas.” The longer that division persists, the deeper Gaza sinks into despair.

Naturally, some regional and international forces are actively investing in the Egyptian division, wishing to tame Hamas’ political independence.

And indeed there are signs that Hamas is now catering to outside powers in an attempt to preserve itself and withstand the pressures that preceded and followed its exit from Damascus as a result of the uprising-turned-civil war in Syria.

Some media report that Khaled Meshaal’s reinstatement as the Hamas political chief would not have been possible without heavy pressure from the head of Egyptian intelligence Gen. Raafat Shehata. With Meshaal at the helm, the normalisation between Hamas and Jordan and Qatar (a major Hamas funder), among other regional powers, is likely to continue.

Moreover, according to Adel Zaanoun, reporting for Agence France Presse on April 3, based on regional experts’ opinions, Meshaal’s re-elections “may better Hamas ties with (the) West.” The fact that the Hamas elections, took place in Cairo, one analyst suggested “is proof that Egypt will support the movement in opening it up to the West.”

It is possible that the price to be exacted from the Brotherhood to end regional and western interference in Egyptian affairs will also include bringing Hamas inline. While Hamas’ Gaza leadership are being denied access to any possible economic independence, some Hamas leaders outside are being propped up as suitable ‘moderate’ candidates in any possible Hamas-western normalization in the future.

That dependency is being slowly but cleverly crafted, as it’s aimed at exacting political ‘compromises’ from Hamas in the long run.

And as if the Israeli siege and the destruction of tunnels are not enough, the United Nations Relief and Works Agency (UNRWA) recently announced a distribution cutoff of basic aid to 25,000 Gaza refugees, a decision that “could exacerbate hardship caused by Israeli and Egyptian controls on the isolated enclave’s borders,” reported Al Jazeera on April 5.

Without alternative economic venues in the face of Israel’s land and sea blockade, Egypt’s crackdown on the tunnels and UNRWA’s budget cuts, the Hamas Gaza leadership is likely to seek alternatives in the form of handouts which will come at a political price.

In the long run, Hamas will face difficult options, including splitting up or following the same detrimental path on which Fatah and the PLO found themselves, leading up to the Oslo ‘peace’ fiasco starting in 1993. Only a constructive end to the Egyptian political deadlock could offer Hamas in Gaza a third, more dignified alternative and that is to be seen.