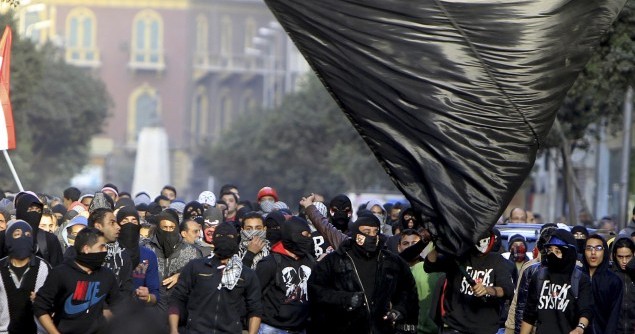 Egypt’s judiciary and security forces appear posed to crack down on militant, highly politicised and street battle-hardened soccer fans in a bid to exploit internal differences among them.

The crackdown however could boomerang by uniting rather than further dividing the fans in their opposition to the security forces, Egypt’s most hated institution because of its role in enforcing the repression of the regime of ousted president Hosni Mubarak.

The security forces and the judiciary hope to capitalize on cracks among the fans, one of Egypt’s largest civic groups, that have emerged beyond their traditional rivalries over who was responsible for the death last year of 74 supporters of crowned Cairo club Al Ahli SC in a politically loaded brawl in the Suez Canal city of Port Said and how to respond to recent sentences handed down by a court against those responsible.

The crackdown would likely reinforce the conviction of all fans that security forces allowed the brawl to happen, if they did not instigate it, in an attempt that got out of hand to punish them for their key role in the popular uprising that toppled Mr. Mubarak and their opposition to the military rulers that succeeded him.

President Mohammed Morsi, who last summer replaced the military as Egypt’s first freely elected leader, would risk another round of vicious street battles that in the past two years have cost the lives of more than 900 people and injured thousands by initiating the crackdown without embarking at the same time on far-reaching reform of the security sector.

The likelihood of resistance to the crackdown is heightened by the leaking this week of a report that concluded that security forces shot to kill protesters with the full knowledge of Mr. Mubarak during the uprising two years ago that forced him out of office; continued police brutality that highlights Mr. Morsi’s failure to reform the 1.7 million-strong police and security forces; discontent over the fact that of the nine security officials involved in the Port Said trial only two were convicted; and a six-week old revolt in the Suez Canal city that feels it has been made the scapegoat in Egypt’s worst sporting incident.

Al Ahli fans celebrated the sentencing to death in January of 21 supporters of Port Said’s Al Masri SC believing that they conspired with the security forces while Port Said charged that it was paying the price for a police action. The pereception of being made a scapegoate reinforced a pattern in the mind of Port Said resident of years of neglect of thei city by the central government in Cairo. The judiciary and the security forces also hope to benefit from divisions within Ultras Ahlawy, the Al Ahli support group, on whether the court verdict satisfied their demand for justice.

The ultras have nevertheless vowed to target the security forces until all of those responsible have been brought to justice. They torched last Saturday a police officers’ club and the offices of the Egyptian Football Association (EFA) after the court announced the acquittal of 28 of the 73 defendants, including the seven security officials.

Militants in both Cairo and Port Said saw the acquittal as reaffirmation of the failure of Mr. Morsi and his military predecessors to hold any security officers accountable for the deaths of protesters in the past two years. The two convicted officers in the Port Said case were the first to be sentenced. The perception that the government is shielding the security forces is enhanced by the leaked report that among other things charged that police two years ago used snipers on rooftops overlooking Cairo’s Tahrir Square to shoot into the huge crowd demanding Mr. Mubarak’s’departure.

The report that summarizes the conclusions of a fact-finding mission initiated by Mr. Morsi could influence the upcoming retrial of Mr. Mubarak, former Interior Minister Habib el-Adly, and six top police commanders on charges of responsibility for the deaths of hundreds of protesters during the protests that toppled the Egyptian leader two years ago.

Messrs. Mubarak and el-Adly were convicted and sentenced to life in jail last June for failing to stop the killings, but the two successfully appealed their convictions. The six commanders- including the head of security in Cairo and the commander of the riot police – were acquitted. The prosecution appealed that verdict and a new trial of the eight is scheduled to start next month.

The judiciary and security forces appeared to be testing the waters with the arrest this week in the Nile Delta province of Menoufia of 38 alleged members of the Black Bloc, a secretive group of black-clad soccer fans founded to protect protesters from attacks by the security forces and supporters of Mr. Morsi’s Muslim Brotherhood. The fans are accused of attempting to set fire to a provincial court house and insulting police officers, lawyers said.

The crackdown in the absence of security sector reform would harden the battle lines between the militant soccer fans and the police that have been drawn in four years of regular confrontation in the stadiums under Mr. Mubarak and in street battles since then. For many ultras as well as many Egyptians, the security forces have come to symbolize state repression that controlled and made their lives difficult not only on the pitch but in their daily lives. A recent human rights report charged that the security forces were a law unto themselves and that abuse and torture continued to be their standard practice.

Police brutality in Port Said earlier this year left scores of people dead and persuaded Mr. Morsi to last week replace security forces in the city with military troops. Sources close to Mr. Morsi argue that the president is seeking to gradually reform law enforcement but has been hampered by the need to restore law and order and protect government offices amid mounting protests in recent weeks sparked by the Port Said verdicts as well as growing criticism of his haughty style of government and charges that he is proving to be no less authoritarian than his predecessor.

Meanwhile, a series of recent strikes and walk-outs by police and security forces, some of which demanded the resignation of the interior minister, have on the one hand increased fear of a further breakdown of law and order, but on the other hand opened a door for security sector reform. The protests indicate significant support for change within the police and the security forces that were until now widely seen as implacably beholden to the former regime as well as opposed to Mr. Morsi’s brotherhood whom they suspect of trying to islamicize their ranks.