So Boston, it seems, has had its 9/11. Not on the scale of the New York attacks, of course. But the shock will be almost as deep. 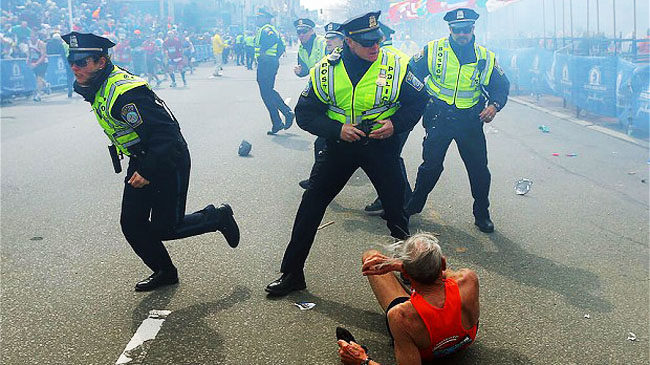 The average American – if there is such a person – will be thinking dark thoughts. “We’ve spent billions on homeland security since 9/11, but these guys still get through. Who can we blame?”

Not so in Norway, when the culprit for the bombing and mass shooting was identified as a foreign terrorist attack by various media outlets, and hours after the stories went out, the identity of a Norwegian far right extremist, Anders Breivik – about whom I wrote after his horrific acts – emerged.

Many of the failed terrorist attacks on American targets seem to have been “inspired” rather than “directed”. Even if the attack turns out to be of foreign origin, one would expect that the FBI have learned some lessons from previous attempts when looking for its origins and the motivation behind it.

My heart goes out to the people killed and injured in Boston yesterday. Just as it does to the people of Baghdad, Kirkuk and Nasariyah, who suffered fatal car bombings yesterday and lost 31 people. We sometimes forget that these events are taking place on a regular basis in other parts of the world. The difference is that in Iraq they are the norm, and in America they are not.

The attacks, if they are of foreign origin, come at a time when American boots are leaving the ground they have trodden on for the past 12 years. Land wars are giving way to drone wars. The Boston attacks will remind America that explosives kill people – a lesson not needed by those who have been on the end of missiles launched by pilots sitting at desks in Nevada. Is that the motive of the attackers? That remains to be seen.

But traumatic as the Boston bombing undoubtedly is, I hope that Barack Obama will find a measured response. Now is not the time for a reinvigorated War on Terror, with all that it implies. Empathy for the victims, yes, but reason should be the order of the day in the White House this morning.