‘Ask Not for Whom the Bell Tolls, Ali Abdullah Salih’ 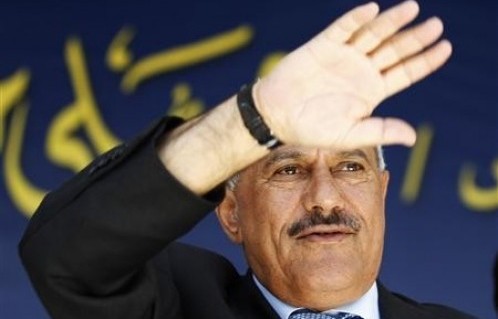 Reports coming out of Yemen today suggest that Ali Abdullah Salih may finally have no choice but to sign his abdication. Yesterday’s altercation with supporters of Hashid shaykh Sadiq al-Ahmar near his fortified house in Sanaa expanded to the Ministry of Interior. Today it is reported that Sanaa International Airport is closed and the Central Bank of Yemen has been shut down as well. Yemen is currently in the dark, both literally and politically.

Having run his country into a ditch, indeed quite a large wadi, President Salih is desperately trying to go out with some kind of moral victory. He will not let the country succumb to Civil War, like Somalia. He will not let Yemen become a failed state and fall to Al Qaeda. He will stay in the country and join the opposition. The words sound conciliatory enough, but his political kalam machine has been spewing forth similar justifications ever since he took power lo those many years ago. Even the little boy who cried “wolf” in the fabled children’s story only did so three or four times.

Salih continues to dance on the heads of snakes, as he puts it. But these are not as poisonous as he would have the outside world believe. Despite the enormous public protests throughout the country, far outweighing his supporters, the country has not slid into a disastrous civil war and the army has not resorted to wholesale slaughter. Even more significantly, despite the “tribal” nature of Yemeni society, the country is still afloat. Contrary to most outside observers’ expectations, being tribal may be Yemen’s saving grace. For centuries the tribal system in Yemen has functioned and still does as a civil society. Unlike Libya or Egypt, there has never been a strong central government that could muscle its way throughout the country. Indeed, the opposition has been there all along, even if not prominent in public protest until recently.

The snakes have not only bitten, they have now put a stranglehold on Salih’s futile attempts to hold onto power and the wealth he can skim off in such a privileged state. The GCC delegation will once again return to Sanaa, the ambassadors will be whisked to the signing ceremony and the tango between Ali Abdullah Salih and his people will go on until the music stops. Ironically, the agreement he has been refusing to sign should be music to his ears, since it grants him immunity. Keep listening; this may really be the last dance.