Advantage Israel: The Gains Made By ‘Removing’ Arafat 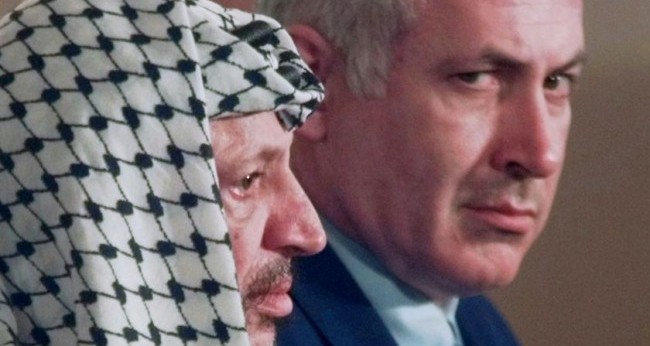 It seems there are still plenty of parties who would prefer that the death of the long-time Palestinian leader Yasser Arafat continues to be treated as a mystery rather than as an assassination.

It is hard, however, to avoid drawing the logical conclusion from the finding last week by Swiss scientists that the Palestinian leader’s body contained high levels of a radioactive isotope, polonium-210. An inconclusive and much more limited study by a Russian team published immediately after the Swiss announcement also suggests Arafat died from poisoning.

It is time to state the obvious: Arafat was killed. And suspicion falls squarely on Israel.

Israel alone had the means, track record, stated intention and motive. Without Israel’s fingerprints on the murder weapon, it may be impossible to secure a conviction in a court of law, but there should be evidence enough to convict Israel in the court of world opinion.

Israel had access to polonium from its nuclear reactor in Dimona, and has a long record of carrying out political assassinations, some ostentatious and others covert, often using hard-to-trace chemical agents. There is also plenty of evidence that Israel wanted Arafat “removed”. In January 2002, Shaul Mofaz, Israel’s military chief of staff, was caught on a microphone whispering to Israel’s then prime minister, Ariel Sharon, about Arafat: “We have to get rid of him.”

With the Palestinian leader holed up for more than two years in his battered compound in Ramallah, surrounded by Israeli tanks, the debate in the Israel government centred on whether he should be exiled or killed.

In September 2003, the cabinet even issued a warning that Israel would “remove this obstacle in a manner, and at a time, of its choosing”. The then-deputy prime minister, Ehud Olmert, clarified that killing Arafat was “one of the options”.

What stayed Israel’s hand – and fuelled its equivocal tone – was Washington’s adamant opposition. After these threats, Colin Powell, the US former secretary of state, warned that a move against Arafat would trigger “rage throughout the Arab world”.

By April 2004, however, Mr Sharon declared he was no longer obligated by his earlier commitment to George Bush not to “harm Arafat physically”. “I am released from that pledge,” he said. The White House too indicated a weakening of its stance: an unnamed spokesman responded feebly that the US “opposed any such action”.

So what about motive? How did Israel gain from “removing” Arafat? To understand Israel’s thinking, one needs to return to another debate raging at that time, among Palestinians.

The Palestinian leadership was split into two camps, centred on Arafat and Mahmoud Abbas, then Arafat’s heir apparent. The pair had starkly divergent strategies for dealing with Israel.

In Arafat’s view, Israel had reneged on commitments it made in the Oslo accords. He was therefore loath to invest exclusively in the peace process. He wanted a twin strategy: keeping open channels for talks while maintaining the option of armed resistance to pressure Israel. For this reason, he kept a tight personal grip on the Palestinian security forces.

Mr Abbas, on the other hand, believed that armed resistance was a gift to Israel, delegitimising the Palestinian struggle. He wanted to focus exclusively on negotiations and state-building, hoping to exert indirect pressure on Israel by proving to the international community that the Palestinians could be trusted with statehood. His priority was cooperating closely with the US and Israel in security matters.

Israel and the US strongly preferred Mr Abbas’s approach, even forcing Arafat for a time to reduce his own influence by appointing Mr Abbas to a newly created post of prime minister.

Israel’s primary concern was that, however much of a prisoner they made Arafat, he would remain a unifying figure for Palestinians. By refusing to renounce armed struggle, Arafat managed to contain – if only just – the mounting tensions between his own Fatah movement and its chief rival, Hamas.

With Arafat gone, and the conciliatory Mr Abbas installed in his place, those tensions erupted violently into the open – as Israel surely knew they would. That culminated in a split that tore apart the Palestinian national movement and led to a territorial schism between the Fatah-controlled West Bank and Hamas-ruled Gaza.

In Israel’s oft-used terminology, Arafat was the head of the “infrastructure of terror”. But Israel’s preference for Mr Abbas derived not from respect for him or from a belief that he could persuade Palestinians to accept a peace deal. Mr Sharon famously declared that Mr Abbas was no more impressive than a “plucked chicken”.

Israel’s interests in killing Arafat were evident after his death. Not only did the Palestinian national movement collapse, but the Palestinian leadership got drawn back into a series of futile peace talks, leaving Israel clear to concentrate on land grabs and settlement building. Contemplating the matter of whether Israel benefited from the loss of Arafat, Palestinian analyst Mouin Rabbani observed: “Hasn’t Abu Mazen’s [Abbas] exemplary commitment to Oslo over the years, and maintenance of security cooperation with Israel through thick and thin, already settled this question?”

Mr Abbas’ strategy may be facing its ultimate test now, as the Palestinian negotiating team once again tries to coax out of Israel the barest concessions on statehood at the risk of being blamed for the talks’ inevitable failure. The effort already looks deeply misguided.

While the negotiations have secured for the Palestinians only a handful of ageing political prisoners, Israel has so far announced in return a massive expansion of the settlements and the threatened eviction of some 15,000 Palestinians from their homes in East Jerusalem.

It is doubtless a trade-off Arafat would have rued.