Think Fez If You’re Looking To Buy Property in Morocco 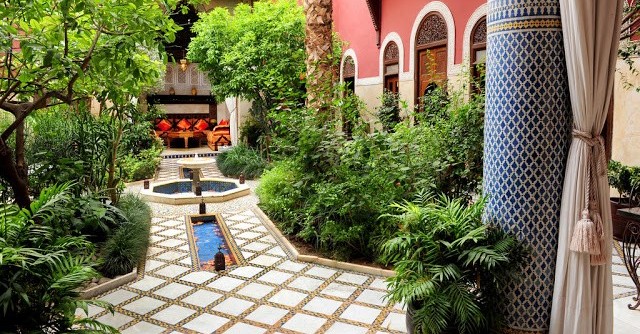 The New York Times has just run an article on buying a restored riad in Marrakech. It comes as no surprise that they have concentrated on the very top end of the market.  While prices have dropped across the country, the Marrakech market still appears over inflated. By contrast the prices in Fez are far more reasonable.

This traditional Moroccan house (pictured above) , known as a riad, has 4,300 square feet of space over two floors surrounding an enclosed courtyard. Dating to the 19th century, it has five bedroom suites and a multilevel roof terrace with views of the minarets of the medina, or old city, of Marrakech, according to Younes Cherkaoui, an agent with Mauresque Immobilier, which has the listing.

Built by a respected local family and called Riad L’Aziza, the house was restored about 12 years ago; it now serves as a guesthouse and is being sold furnished.

The courtyard, divided into four symmetrical plant beds with a central fountain, has walkways, columns and other plaster-covered surfaces set with elaborate terra-cotta tilework of blue, green, gold and cream. Rooms opening onto the courtyard on the ground floor include a Moorish living room bordered with delicately carved plaster designs and a carved cedar ceiling.

Nearby are three bedroom suites with tiled walls; their bathrooms are walled in colorful plaster. The ground floor also has an office and a kitchen with a service entrance.

The second floor has two bedroom suites, each with a fireplace and a private terrace.

The salmon-colored roof terrace has three open-air living and dining rooms at different levels, along with an area for sunbathing and a spa room. Arched doorways and transoms of intricately carved cedar are found throughout the house, as are stained glass, ornate ironwork and traditional Moroccan sconces and rugs.

The riad is in the center of Marrakech in the medina, about a five-minute walk from the main square, Jemaa El Fna. Riad L’Aziza is about 20 minutes from the international airport, Mr. Cherkaoui said.

In the five years leading to the international financial crisis in 2008, house prices in Morocco rose 35 to 40 percent; since the crisis they have settled in at 20 to 30 percent below their peak, said Loïc Raboteau, the head of the French and North Africa Law Department at the law firm Kobalt Law in London.

Foreign buyers typically constitute about 10 percent of the residential real estate market, and many prospective buyers have had a “wait-and-see” attitude about North Africa since the crisis, compounded since then by the turmoil of the Arab Spring, which started in 2011, said Soraya Fahim, a manager of the residential department at the brokerage CBRE in Morocco.

Tourist areas like Marrakech and Tangier area have been the hardest hit. But the Moroccan government’s demonstrated stability and the passage of new fiscal policies have had an encouraging effect on foreign buyers, particularly from France, Ms. Fahim said.

According to Mr. Raboteau, prices in Marrakech last year decreased by 1.7 percent while remaining stable nationally; the number of property transactions countrywide increased by 7.8 percent.

The highest-end properties are selling for about 2,500 euros per square meter currently, or about $300 a square foot, said James Price, the head of the international development team for the brokerage Knight Frank. Riad L’Aziza is priced in this range.

WHO BUYS IN MARRAKECH

Most foreign buyers tend to come from France, Belgium and Switzerland, Ms. Fahim said. “We’ve also noticed recently some demand coming from countries like Russia and the United Kingdom,” she added.

There are no restrictions on foreign buyers, Mr. Raboteau said. The process resembles that of France, in that notaries handle most aspects of the transaction, though foreign buyers would be advised to hire an independent lawyer as well.

“Don’t expect the notary will give you legal advice,” Mr. Raboteau said. “His role is to check the identity of the parties, draft and register the deeds.”

Buyers can expect to pay about 6 percent of the sale price in taxes and fees, he said. Mortgages are available, with a down payment of at least 30 percent.