All the News That’s Fit to Print (Around the Ad) 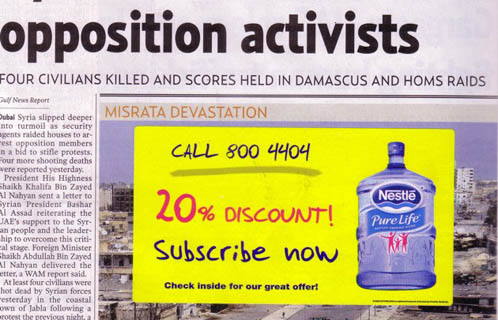 This is the front cover of today’s Gulf News Paper Edition. You may notice that instead of the expected devastation captioned above, we have a bright yellow sticker advertising Nestlé bottled water. Only when removing the sticker can you see the front page headline picture.

I have railed against this before. I simply can’t see how it makes sense for any of the three parties to the transaction. How can it make sense to Gulf News to sell its most valuable editorial real estate like this? Removing the sticker also removes the newsprint below, leaving the image degraded. The message is so far at odds with the content, it’s almost ludicrous. This is where the second party to the transaction comes in – how does Nestlé Middle East or Nestlé’s agency honestly think it effectively positions the company’s brand to have it so strongly associated with negative headlines and editorial connotations?

I have spent years dealing with advertisers who want to promote their products only within the context of the best, most positive and relevant editorial environments, and yet here’s Nestlé gladly occupying ‘Misrata Devastation’! Are they mad? The irritation provoked by the daft placement of the message, let alone having to remove it, has had nothing but a negative connotation for the Nestlé brand for readers, as far as I can see.

As it happens, this particular example is, I would humbly submit, worse than usual. Do you really want your brand linked to the (appalling) devastation of Misrata? Or the terrifying and saddening events in Syria? But it’s never going to be good – front pages are sold on the basis of negative news. When was the last time you saw a pregnant panda leading the news*? It’s a no-brainer, surely. The front page is negative and the front page, if the editor has done his/her job, the news we really, really want to see. Not have stickered by inane advertising.

And now last, and I suspect least, we come to the third party to the transaction. The hapless reader/subscriber. In having to remove this silly sticker in order to view the front page of the newspaper, I have been presented with a momentary irritation. I could understand in these internet days of ‘freemium’ models if I had accepted a downgraded experience in return for a free product, but I didn’t. I paid for Gulf News.

And yes, thank you, I do feel better now.

* A caveat to that point is provided by the newspaper that thinks a small boy getting his private parts stuck in his zip is a news story. Perhaps interestingly, the same reporter contributed, seven days earlier, “Emirati Bobbitised by Bangladeshi“. It’s just the way news breaks, folks. It’s not an indication of any sort of fascination… 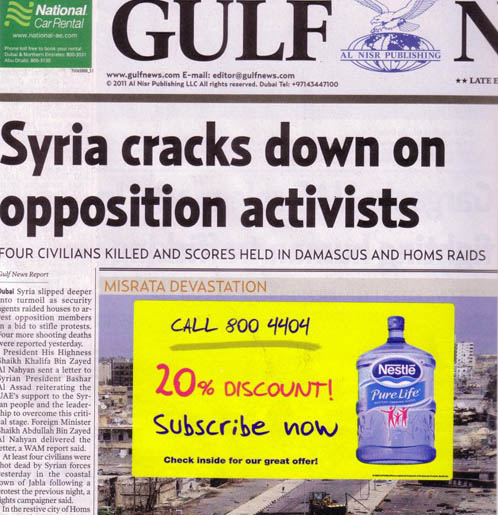