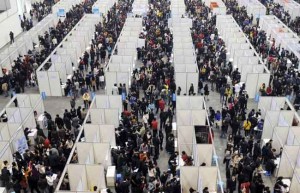 There have been many days that I have wanted to declare my liberation from being an office slave. I have often envisaged – as many people do – after yet another ridiculously inane meeting, or an unreasonable weekend request to put together yet more Powerpoint slides, to stand up and yell the words “I quit!”

However, there is also something of the ice queen in me that has planned and re-planned a stroll into the manager’s office, a handing over of a crisp white envelope with the merest hint of a smile, leaving my badge on the desk and then a victory walk to freedom to rousing applause from my colleagues, out of the building’s front door.

I’ve never done it, and it’s not just because I still have the mortgage payments for the dream house and the dream garden, and the dream car parked in the drive, although the irony is not lost on me that my dream lifestyle is trapping me in a nightmare job. No, it’s not just about the money.

My job is who I am, and defines everything about me.  And if my job defines who I am – well, who would I be without it?

You think I’m wrong about how our jobs define us? Well, picture all those parties or tedious networking events…

“What is your name?” asks the stuffed shirt. And this is always, always followed by “and what do you do?” as though your job is your entire life definition.  Even dating and marriage are governed by the rule that we define ourselves by our jobs. Bagging a doctor, lawyer or investment banker – although maybe not so much the latter during the current recession inspired by the collapse of the banking sector – let’s admit it, we still envy those with ‘proper jobs’ and in the Asian background I come from, job status is everything.  It carries little weight to be an artist, philosopher, journalist, thinker or scholar.

We do bring it on ourselves. I think Office Slavery is like Stockholm syndrome. We’re trapped, but we fall in love with the idea of having the status, and definition – not just in the eyes of others, but in our own eyes. It’s hard to put ourselves under scrutiny, but we should ask ourselves the question – not ‘what am I?’ but, ‘who am I?’ and even ‘how am I?’ thinking about our behaviour towards others.

Instead of the narrow definition of our job titles, we should want to free ourselves.  Of course, I don’t mean to instigate a plague of resignations being handed in as you all arrive at work this morning.

As a person of religion, work is a must.  The example of the Prophet Muhammad is clear – you can’t sit around and wait for others to serve you. But ‘work’ doesn’t have to mean activity that is rewarded financially. It doesn’t need to predicate an individuals worth on how much income they derive, and how much ‘growth’ they pump into the economic system. If anything, that reduces the worth of a human being to their income generating potential.

But the current financial climate needs to instigate some deeper thinking within the Muslim community about the purpose of work. Is it for money and wealth? Do economies need constant ‘growth’? What are the responsibilities of corporate entities?

In my mind what is important in addressing the purpose of work is to see it not as an end in itself, but a component of developing the self and society. Yes, it helps to put food on the table – but that doesn’t need to be just our own tables. Yes, it makes us productive members of society, but such a perspective broadens out the meaning of work to include housework, childcare, poverty relief, artisanship and so many other occupations.  Work also lets us learn about ourselves by exposing us to challenge and people, as well as developing perseverance, endurance and a sense of self worth and dignity.

I’m simply asking the question: what about actually living life? Living life as who we are, to fulfill our dreams and aspirations, to be better human beings. We should own our jobs, and not the other way round.

This article was first published on the award winning blog, Spirit21.co.uk, and is posted with the kind permission of its author Shelina Zahra Mohammed.