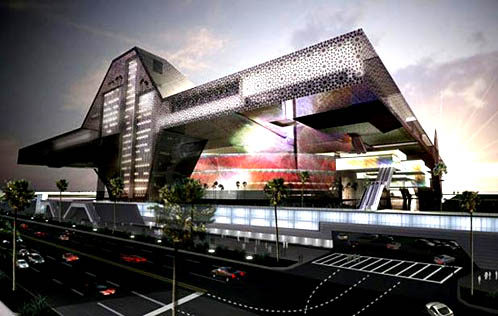 Doha Sports City stadium is to see capacity increased from 46,800 to 65,000 seats. The cost would surpass the $1.3 bn of London’s Wembley Stadium

Qatar, with trade union leaders set for a second round of discussions with world soccer body FIFA about questionable labour conditions in the Gulf state, has vowed to ensure that contractors involved in preparations for the 2022 World Cup will adhere to international labour laws.

An official of the trade union, Building and Wood Workers International, said the unions were scheduled to meet again with FIFA in late January, as a follow-up to a meeting in November with FIFA president Sepp Blatter.

FIFA pledged after that meeting to help bolster the rights of migrant workers building World Cup infrastructure in Qatar in a bid to fend off a global trade union campaign that would denounce under the slogan, ‘No World Cup in Qatar without labour rights,’ the Gulf state as a slave driver. The unions have given FIFA six months to ensure that Qatar meets international labour standards.

Qatar is the first Middle Eastern state to have won the right to host the world’s largest sporting event.

The union’s message to FIFA appears to have not been lost on Qatar even though union officials said they could not operate in the Gulf state, which has no unions of its own.

Speaking at Carnegie Mellon University’s campus in the Qatari capital of Doha, Qatar 2022 Supreme Committee Secretary General Hassan Al Thawadi conceded that “major sporting events shed a spotlight on conditions in countries. There are labour issues here in the country, but Qatar is committed to reform. We will require that contractors impose a clause to ensure that international labour standards are met. Sport and football in particular, is a very powerful force. Certainly we can use it for the benefit of the region.”

Qatar has embarked on a mega infrastructure program in advance of the World Cup involving an $11 billion new international airport, a $5.5 billion deep water seaport, a $1 billion transport corridor in Doha, expenditure of $20 billion on roads and $4 billion for the construction of nine new stadiums and renovation of three existing ones.

Mr. Thawadi said at a brainstorm in Doha earlier this month on the role of government, business and NGOs in sports that the Gulf state would award the management contract for oversight of the infrastructure program in the first quarter of this year

The International Trade Union Confederations (ITUC), which represents 175 million workers in 153 countries, charged in a report earlier this year that the working conditions of migrant workers in Qatar and the United Arab Emirates were “inhuman.”

Entitled ‘Hidden faces of the Gulf miracle,’ the multi-media report demanded that Qatar prove that migrant workers building infrastructure for the tournament are not subject to inhuman conditions.

It said that the working and living conditions of mostly Asian migrant labour in Qatar are unsafe and unregulated.

“A huge migrant labour force, with very little rights, no access to any unions, very unsafe practices and inhuman living conditions will be literally putting their lives on the line to deliver the 2022 World Cup,” ITUC general secretary Sharan Burrow said at the time of the report’s release.

Qatar and other oil-rich Gulf states have long been targeted by labour organizations for their treatment of particularly unskilled and low-skilled workers. Qatar like the UAE and others in the Gulf operates a sponsorship program under which all foreign workers have to have a local sponsor who can make seeking alternative employment or another sponsor difficult and who often retains the worker’s passport on employment. Trade unionists argue that the lack of a minimum wage further enhances exploitation of labour.

The issue of workers’ rights touches a raw nerve in countries like Qatar and the UAE where the local population constitutes a minority. Gulf states are concerned that improving labour conditions would not only have economic consequences but also give foreigners a greater stake in a society which ensures they are forced to leave the country once their contract has ended.

Pressure on Qatar from FIFA and the trade unions comes at a time that the Gulf state is enthralled in a debate about its national identity in which conservative and nationalist forces object to concessions being made to foreigners and fans expected to attend the World Cup such as allowing the sale of alcohol and pork. Qatar, which permits the serving of alcohol to foreigners in hotels and on board state-owned Qatar Airways, has said it would create free zones during the tournament in which fans would be allowed to consume alcohol.

An trade union campaign would tarnish Qatar’s international image carefully crafted with the launch in the 1990s of the Al Jazeera television network, the creation with Qatar Airways as a world class airline and the positioning of the Gulf state as an international sports hub with the hosting of tournaments like the World Cup and call into question FIFA’s vote in favour of Qatar. Qatar is preparing to also bid for the 2020 Olympic Games and the 2019 World Athletics Championship.

An international labour campaign would moreover revive some of the controversy that has overshadowed Qatar’s success in becoming the first Middle Eastern state to host a World Cup. That success has been mired by allegations of corruption that so far have proven unsubstantiated; the downfall of Mohammed Bin Hammam, the Qatari national who was FIFA vice-president and has been suspended as president of the Asian Football Confederation (AFC) on charges of bribery, and concern that Qatar’s searing summer temperatures will impede performance during the tournament.