Qatar's soccer league, in a break with a reluctance among Gulf states to give their largely expatriate majorities a sense of belonging, is next month organizing the region's first cup for foreign workers' teams. 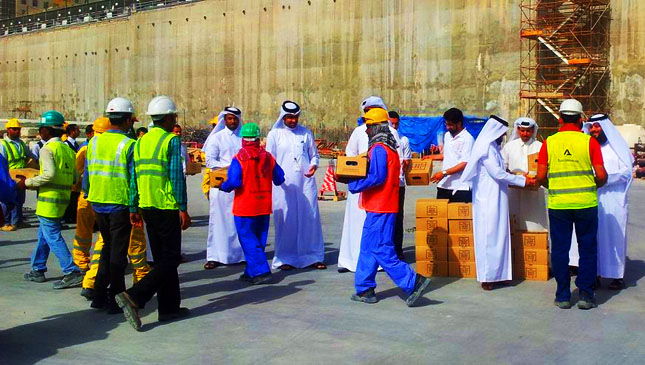 The cup, involving up to 24 teams formed by foreign workers primarily from Asia who account for the bulk of Qatar’s 1.5 million expatriates, is part of an effort to improve working and living conditions as well as a bid to fend off international trade union demands to meet global labor standards.

Meeting those standards would involve abolishing the widely criticized sponsorship system common to various Gulf states that effectively gives employees full control of their employees; allowing the creation of independent trade unions; and adopting the principle of collective bargaining – changes Qatar until now has shown no inclination to entertain.

The cup further fits into Qatar’s sports strategy that aims to make sports part of the country’s national identity and constitutes a key pillar of its cultural and public diplomacy as well as its global projection of soft power as part of its foreign, defense and security policy.

International trade unions have threatened Qatar with a boycott of its hosting of the 2022 World Cup if it failed to adopt international labor standards. Human rights groups are meanwhile documenting individual cases of workers that they consider to be violations and in some case are intervening to improve their conditions. The government’s tacit cooperation like the soccer cup and moves to improve worker safety and security as well as living conditions constitute small but not insignificant steps forward.

The International Trade Union Confederation (ITUC) charges that Qatar’s steps so far that also include drafting a charter of rights expected to be announced at the end of this month and a review of the much criticized recruitment system that often exposes workers to extortionate fees fall short of its promise to fully comply with international labor standards and are being implemented unilaterally rather than in consultation.

ITUC General Secretary Sharan Burrow last month said she was “disappointed to hear that the Qatar 2022 Supreme Committee has publicly asserted that it has ‘sought out concrete suggestions on best practice’. The ITUC, representing the worlds working people, has not been consulted nor seen the draft charter. The UN, IMF, World Bank and the G20 all see fit to discuss labour issues with the ITUC, and consult with worker representatives in formal and informal dialogues.  Yet Qatar’s Supreme Committee appears to ignore these accepted protocols in their failure to discuss the workers charter with the ITUC.”

While forward-looking Qataris acknowledge the need to improve workers’ conditions as well as their country’s unsustainable demographic dilemma, the breaking point at this point in ongoing discussions with the ITUC is likely to be the demands for independent unions and collective bargaining.

A recent survey by the Permanent Population Committee (PPC) concluded that more than 80 percent of Qataris worry about the country’s dependence on foreign labor expected to increase with the import of more workers needed to complete $150 billion worth of infrastructure projects in advance of the World Cup.

The government this week said that it would establish an independent committee to protect the rights of private sector workers that would help them in disputes with their employers and offer legal aid in cases of work-related injuries or deaths. It said the 50-member committee would be populated by employers and employees, seven of which would be appointed as board members. The committee’s status would fall short of that of an independent union that could engage in collective bargaining.

The unions charged last month that the number of construction site injuries in Qatar was increasing and that workers in Doha’s Sports City stadium were eight times more likely to die in a fatal accident than construction workers in Britain. “They are reckoning that more than 1,000 workers were injured in falls last year; that’s very serious. The problem in Qatar is that the workers don’t have rights to be involved in any prevention measures, they don’t have training, they don’t have the equipment,” said Fiona Murie of the Building and Wood Workers’ International (BWI).

The ITUC said earlier that it would put a promise made last year by Qatar Labor Minister Sultan bin Hassan that his government would not penalize workers who formed their own unions to the test later this year. Critics caution that Mr. Bin Hassan’s oral pledge was not legally binding.

Progressive Qataris acknowledge privately that their country’s demography is unsustainable with less than 300,000 nationals in an increasing foreign population that is currently estimated at 1.7 million. That demography has until now persuaded Qataris and other Gulf nationals to ensure that foreigners are continuously reminded that they are only temporary residents for the duration of their contract.

Those reminders included a reluctance of sports clubs to attract non-nationals as fans. Soccer stadiums in the region with the exception of Saudi Arabia are as a result largely empty. Qataris further admit that stadium attendance is also low because they perceive their country’s clubs that are often owned by members of the royal family as the ‘sheikh’s clubs. ‘ The foreign workers’ cup, while not intended to reverse that policy constitutes a potential chink in its armor.

To increase stadium audiences and increase the local population’s involvement with clubs, Qatar is looking at the possibility of transferring ownership to publicly held companies. The foreign workers’ cup is viewed by many as a first step towards creating a fan base for Qatari clubs among the country’s a non-Qatari population – an initiative long shied by clubs across the region because that could be a first step towards a greater attachment to their host countries.

Qatar University sociologist Kaltham Al Al-Ghanim recentlu called on the country’s sports clubs to set up branches in the Industrial Zone where many of foreign workers are housed “to channel their energy to productive avenues and hunt for sporting talent.” Ms. Al-Ghanim cautioned that if foreign workers were allowed to “live on the social fringes, the danger is they would take to illegal activities and emerge as a threat to social security.” She said the need to engage them socially was enhanced by the fact that many of them were unmarried or in Qatar without their families.