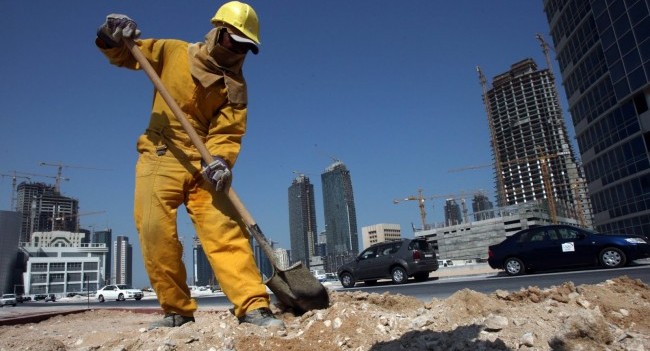 Qatar is preparing a radical overhaul of its controversial kafala or labour sponsorship system in response to mounting criticism that threatens reputation capital it hopes to gain from hosting the 2022 World Cup.

The expected reform is likely to include shifting sponsorship of foreign workers, who constitute a majority of the tiny Gulf state’s population, from individual employers to the government. It would also allow workers to seek alternative employment without permission of their sponsor after a period of notification. Qatar would further work with the major supplying countries to establish regulated employment agencies to cut out corrupt middlemen.

It was not immediately clear whether the‎ changes once announced would satisfy international trade unions and human rights groups that have denounced the kafala system as modern day slavery and called for its abolition.

Pressure is mounting on Qatar with world soccer body FIFA president Sepp Blatter scheduling a second trip to Qatar following extensive debate of the issue as well as continued questions about the integrity of the Qatari World Cup bid at a meeting last week of the group’s executive committee.

Qatar has suffered substantial reputational damage as a result of the criticism and questions. The Gulf state, which is engaged in a cold war with neighbouring Saudi Arabia because of its support for the Muslim Brotherhood, needs to take the sting out of criticism give that the World Cup is a centrepiece of its sports strategy that is designed to create the kind of soft power necessary to compensate for its lack of military hard power.

While it has actively engaged with its critics and two of its major institutions – the Supreme Committee for Delivery & Legacy and Qatar Foundation- have issued charters of workers’ rights and welfare standards to be included in contracts, Qatar is still perceived as moving too slowly.

The International Confederation of Trade Unions (ITUC), Qatar’s harshest critic, has questioned the Gulf state’s sincerity, charging that it is treating the issue as a public relations problem.

The charters and proposed changes to the kafala system which puts employees at the mercy of their employers focus on workers’ material and living conditions as well as corruption in the recruitment system that puts foreign workers into heavy debt even before they arrive in Qatar.

Qatar hopes that these changes will enable it to fend off demands like the right to form independent trade unions and collective bargaining that would fundamentally alter the Gulf state’s social structure in which the citizenry accounts for a mere 12 percent of the population as well as its enlightened autocracy.

Members of a visiting European parliament delegation said Qatari officials had discussed the expected changes to the kafala system with them. The parliament held in February a hearing about labour conditions in Qatar.

“The Qatari government has assured us they will make reforms to the sponsorship system and bring forward a law for the protection of domestic workers, where sexual abuse of women is at its greatest,” said Richard Howitt, a British Labour Party member of the European parliament.

Mr. Howitt posed three questions at a news conference which reflected the changes Qatar was preparing.

The changes would keep the kafala system in place but would remove its most onerous bits. Sponsorship by the government promises that workers will no longer be exposed to the whims of their employers. Freedom to switch employers reduces a workers dependency.

Qatar Foundation, which drives social and educational development in the Gulf state, has been working on a reform of the recruitment system for more than a year in a bid to ensure that workers do not pay heavy fees to middlemen for their recruitment and kickbacks of some $600 per head to corrupt company human resource managers. Its charter adopted by the World Cup organizers establishes the principle that a worker should not pay for his or her recruitment. Qatar appears to have opted for working with mostly Asian countries supplying labour to establish regulated employment agencies rather than setting up its own recruitment system.

The trick for Qatar now is to match its words with deeds. “Our visit is not done, we must continue this work. But the openness and the huge commitment to improve the situation is something we take back home. This has been a very positive start, “said German Christian Democrat Angelika Niebler.