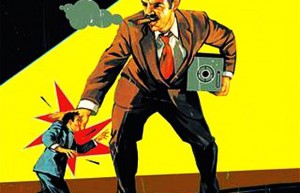 I’m being predictable, I know, but there’s no way on earth I’d let the news that customers are unhappy with their banks pass me by without comment.

A poll by YouGov, full details on Zawya, has found that 20% of people are highly upset with their bank, while fully 50% of consumers would not recommend their bank to a friend. 42% cite the main reason for their dissatisfaction is the lack of priority banks give to customer service. Some 40% of people have cancelled a credit card.

I am shocked, people, deeply shocked.

Why aren’t the figures higher? Nobody I know who lives in the UAE is happy with their bank. Nobody has ever been able to recommend their bank to me. The one time I bit the bullet and tried to flee ever having to deal with the hapless goons at my bank, Lloyds Jumeirah failed to open our account without a litany of stupid mistakes that finally had us giving up and sticking with the devil we, sadly, know all too well.

Actually, one reason why the figures may not be as high as I thought is that between them, the ‘most used banks’ are Dubai Islamic Bank and HSBC – and between them, they account for only 21% of respondents to the survey.

I’m saying nothing about DIB, you understand…