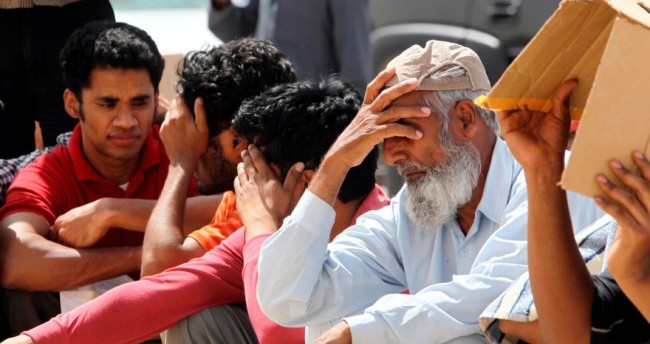 Labor inspectors on Monday swept up thousands of illegal workers in a series of raids across the Kingdom as the amnesty period for expatriates to legalize work status expired on Sunday.

According to Jeddah police spokesman, Nawaf Al-Bouq, 3,918 undocumented expats were arrested in and around Jeddah on Monday.

The rush-hour commutes in Jeddah and Riyadh were less congested, as undocumented expats stayed home. Some school administrators closed their campuses because their teachers’ legal status remains unresolved.

On Palestine Street at Prince Majed Road in Jeddah, at least 3,000 Indonesians gathered to protest their inability to obtain legal status.

“We had tried for weeks to regularize our status, but officials are insisting we bring our original passports and other documents which we are unable to do,” one illegal worker told Arab News.

“The Ministry of Labor has a strategic plan for its inspection mission,” Al-Shehri said. “The mission has started and will continue to be conducted by highly qualified staff displaying their official badges.”

He said he expects business owners to cooperate and “uphold the new law” for the public interest and growth of the local economy.

“Business owners and workers who are found to be in violation will be immediately referred to the Ministry of Interior,” he said.

The Labor Ministry’s campaign to rid the country of illegal workers followed a seven-month grace period, which allowed foreigners working illegally in Saudi Arabia to obtain the proper iqamas. The Saudi government gave workers a three-month amnesty period that was scheduled to end July 3, but extended it to Nov. 3. The government did not provide a third grace period.

Workers in unskilled positions, part-time office workers under the sponsorship of their parents and international schoolteachers have been particularly hard hit. However, undocumented teachers have been given reprieve by the Ministry of Education, which issued a statement that no raids would be conducted during the first semester of school.
Many small shops and restaurants, which commonly hired undocumented workers, were closed throughout Jeddah.

In Riyadh, the usually bustling Al-Batha shopping complex in the city center appeared deserted, with many shops either empty or closed altogether.

The Ministry of Labor offices will continue to help workers who had already applied for sponsorship transfer to complete the process this week, according to Al-Shehri. Legalizing workers’ residency status shall also continue.

In addition, the ministry has launched an employment service to allow legal expats to hold part-time positions while employed in full-time jobs.

Workers must hold valid iqamas and have permission from the original sponsors to work. In addition, they must register their labor information at www.ajeer-sa.com and have a sound attendance record.