A PR Coup: The Woman & the Jeddah Projects 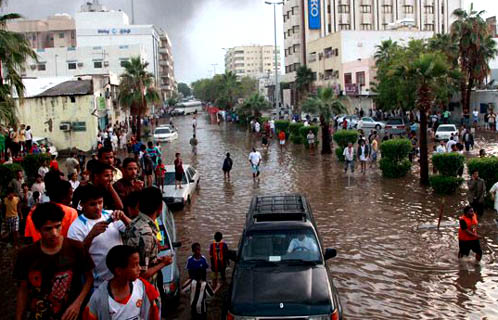 The school principal and the mother of four, Mrs. Al Touariki was the first Saudi woman ever to inaugurate a public project in the whole Kingdom, a piece of news filled all Saudi media outlets over the past few days.

What is the project, you may ask? It is one of the projects that promised to protect the city of Jeddah of any possible floods in the coming years. It is most certainly good news for all those concerned about Jeddah. It is a message that the wheel did not stop, and there are still sincere efforts to realize the promises that were given after the second flood hit the city few months ago.

Let’s go back to Mrs. Al Touariki because her presence at the inauguration is one of the cleverest PR and marketing moves that I have witnessed.

For those who do not know her story, she is the woman who stopped Prince Khalid Al Faisal, the governor of Makkah province, and openly complained about the disastrous state of the infrastructure of her area and the whole city in general.

That move during the Prince’s visit to her area after the floods was circulated by the media as nothing less of a tale of bravery from her side, and a story of a great humbleness from the Prince’s side. Both are true up to some extent.

The decision of asking her to be part of the inauguration is clever because it gives the project both a human face and credibility. She has been presented before as the voice of Jeddawies (the people of Jeddah), she has been turned into a symbol that keeps reminding us of the event and its aftermath, and in marketing, symbols are considered of a great value.

People could get skeptical about the efficiency of these projects, they have witnessed broken promises before, they have been through disaster twice already. So to contain all this, let’s bring the symbol of the people to witness the realization of her dreams of a safe house and city, let her represents the city’s inhabitants and make them feel that they are there themselves. Her presence spreads sincerity, we would not bring her if it was for nothing you know!

The message was certainly well received by the audience, which means it was both smart and successful. Now let’s sit back and watch the implementation.

That is the most important part.

Saad Al Dosari is currently working as a chief engineer in one of the Saudi telecom companies. He holds a B.Sc. degree in engineering; electronics and communication from King Abdulaziz University in Jeddah, KSA and a master of business administration degree (MBA), specialized in marketing, from the University of Leicester, UK. His blog, An Eye on Saudi, aims to initiate discussion and exchange ideas - and has a focus on business issues in the Kingdom.