TweetNadwa: 140 Seconds to Say It As You See It 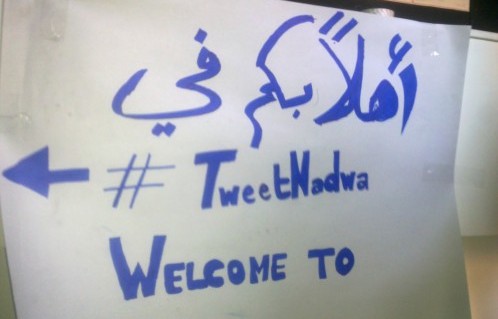 According to the Arab Social Media Report (ASMR) produced by the Dubai School of Government’s Governance and Innovation programme, the Arab region houses 30 to 40 million Twitter users that are considered “active”. So, to what extent have these Twitter users, many of whom are Egyptian activists, been able to build on the success of their “Facebook Revolution”?

Egyptian activists are in fact using new social media venues, such as Twitter, to address controversial issues that Egyptian society typically avoids, such as the role of the Muslim Brotherhood and economic assistance from the United States and the International Monetary Fund. But in recent months, as the increasing usage of social media by post-revolution activists continues to address controversial topics, a new socio-political movement called TweetNadwa has emerged on Twitter to debate one of the most controversial issues of all, the role of religion in politics.

About two months ago, Twitter user EimanAbdel pointed me towards TweetNadwa when I asked if activists in the Arab world have become fatigued following the revolutions in Egypt and Tunisia. Basically, the answer was a resounding no. TweetNadwa, which means Tweet Symposium, operates as an online Egyptian forum developed by Egyptian grassroots organiser, Alaa Abd El Fattah. To publicise the first-ever public forum of this virtual Twitter community, organisers created a Facebook page to invite users to participate.

Hundreds of Twitter users and audience members gathered in-person to read and respond over a large screen in Dokki, Egypt. They voiced their thoughts on hot-button issues in no more than 140 seconds (for in-person attendees) – or 140 characters (for those participating online). The setting resembled a talk show studio setting except that participants, or “netizens”, voiced opinions and thoughts on many levels – ranging from in-person questions to ones posed online by people sitting in front of their computers in other parts of Egypt.

These “netizens” included Egyptians and expatriates, who could participate from countries like Canada or the United Arab Emirates. If audience members agreed with participants’ responses, then they waved their hands in the air rather than clapped, so as not to disrupt the short response period.

News shows, like Anderson Cooper 360°, recently discussed the topic of whether the Muslim Brotherhood could be a threat to secular democracy – a pervasive fear for some inside and outside of Egypt. Thus, El Fattah mobilised fellow Twitter users to discuss the evolving description and purpose of political Islam and religio-political identity, and its role in Egypt’s public sphere.

There are both logistical and philosophical lessons to be learned from this forum. The first lesson is that virtual forums can combine the benefits of face-to-face engagement with technological ease. One need not see others in-person to have an inclusive debate with them.

For example, Twitter user “mand0z” asked a former Muslim Brotherhood member, Ibrahim El Houdaiby, who was there in person, why he joined the organisation in the first place. Participating netizens could match a face with Ibrahim’s response, and mand0z was still able to have his question addressed, even if he himself wasn’t physically present.

Second, new groups that have not formally met or defined their identity can still benefit from organised forums via abstract networking devices, like Twitter and Facebook. Both facilitate the exchanging of ideas without idea-makers being judged by appearance – or the potentially more divisive construct of ethnicity in identity politics – if one chooses to participate virtually.

The third lesson is more philosophical in that TweetNadwa demonstrates the possibility of engaging peacefully in large-scale controversial, nuanced debates about religion and politics. In fact, including controversial viewpoints challenge the secular paranoia regarding Islamic political parties – which is often magnified by uninformed media outlets.

Through social media tools like Twitter, El Fatah enlisted participation by non-Egyptians without fixating on ethnic identity and offered a model for other activists and organisations to set up their own virtual dialogue sessions.

TweetNadwa’s participants are transforming the paradigm from an abstract controversy into an accessible discussion available to anyone who respects healthy dialogue. These lessons learned may be valuable for other countries in the MENA region – and the full future impact remains to be seen.