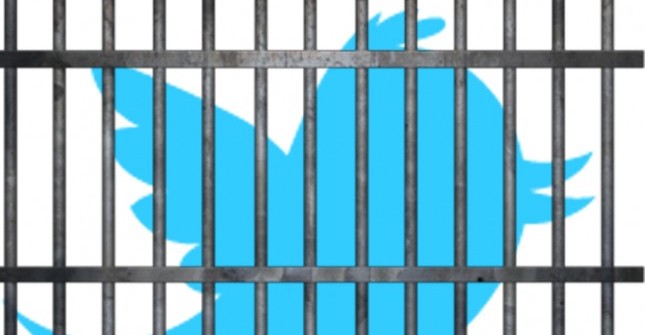 Gulf News recently carried a roundup of recent cases of bloggers and tweeters in trouble around the Gulf and it’s an extensive and growing list.

Flagged as being ‘with inputs from AFP’, 60% of the story is lifted directly from an AFP file, (the rest being made up of this report from Habib Touma, which is the only bit available online) but we mustn’t cavil, must we?

Tweets aren’t a joking matter anymore – imagine facing this one in court: “undermining the values and traditions of Bahrain’s society towards the King on Twitter”. The six Bahraini ‘tweeters’ who did have just been sentenced a year in prison for ‘misusing the right of free expression’.

It’s as neat an illustration of the conundrum posed by social media in the Middle East as you’re likely to get. Here we all are in possession of these powerful and far-reaching technologies that support widely sharing information and opinion and when we use them we’re suddenly very far above the parapet indeed.

All this freedom of expression stuff suffers from the problem that it is, of course, that it’s an absolute. You’re either free to express or not, surely? But then we also apply ‘filters’ to that absolute in the West (whilst being all to ready to be scandalised by the hypocrisy of societies that don’t allow total freedom of expression) – incitement, hate speech, holocaust denial and a number of other things our society deems to be unacceptable.

We also saw how fragile our freedoms are when British Prime Minister David Cameron, faced with lawless rioting across the country organised via Facebook and Twitter made it clear he would favour ‘switching the Internet off’. That’s the kind of thing despots do, isn’t it?

The trouble is, of course, that government is government the world over – there’s that lovely definition of democracy – “Say what you like, do what you’re told.” which works well as long as when you say what you like it doesn’t have the benefit of a platform open to every man and with enormous power to allow messages to be shared and reach audiences far wider than are possible with ‘traditional media’. Let’s not forget, there are now over double the number of users of Facebook Arabic in the Middle East and North Africa than there are newspapers sold every day (in English, Arabic and French combined) in the region. That’s Arabic alone – most users in the region still prefer the English interface, whatever language they are posting in.

Of course, it doesn’t take insulting a leader or inciting religious hatred to get into trouble with the law on Twitter – you can just break any old law that would have applied in the ‘analogue world’ – for instance, a lady was fined Dhs 1,000 in Dubai earlier this week for calling an Egyptian gentleman ‘stupid’. The law in the UAE does take the issue of personal respect very seriously indeed – it’s not something limited to the rulers alone. So, logically, calling someone stupid on Twitter could potentially open you up to a Dhs 1,000 fine.

It’s a reminder – whether you’re going to put your life on the line for something you believe in or whether you’re just sounding off. The law is peering over your shoulder – and those little 140 character blipverts are subject to its full might and weight…