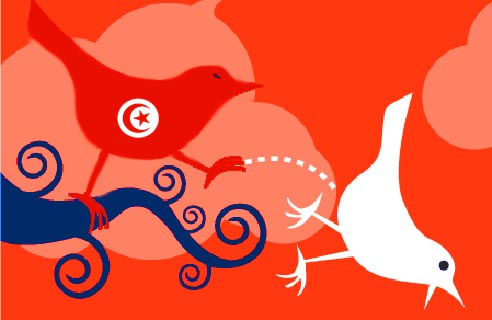 The first thing that struck me was how often trending tweets were (completely) wrong. Twitter is great for disseminating information extraordinarily quickly. An interesting tweet can be recycled at the touch of a button and, if it is on a trending topic, the tweet is exponentially repeated. There is only the (at times) gullible judgements of those re-tweeting there to stop a false rumour from being re-tweeted ad nauseam.

The first falsehood that I’m aware of was when the Foreign Minister’s webpage was hacked and a fake resignation letter was posted. Quite the interesting bit of gossip, this was whipped around the twittersphere at pace as news. Then there were rumours that the President’s family had left for Malta and that an escape route had been planned for his imminent escape: two days before he finally left. When he did finally leave Twitter was comically bad at predicting where: Malta. Sardinia. Paris. Malta. Qatar. Malta. UAE. Saudi. Sudan and so on.

This is not to criticise Twitter as much as to prompt people to step back for a second and think about what Twitter actually is: a 21st century gossip super-highway.

Most of the tweets on Tunisia’s developments were of a breathless fervor; joyful that the dictator was leaving. While, of course, it is most certainly a good – great – think that Tunisia’s dictatorial leader has left, there was rarely any consideration of what was next.

Indeed, many people appeared to simply assumed that things would automatically, ipso facto, be better with Ben Ali gone. While – again – I fervently hope that this is the case, it is far from a given conclusion. Today, looting and vigilantism has become a minor civil war between loyalists and the Army. Next? Who is to say? Even if there is no descent to civil disorder, I fear that peoples’ expectations now are sky-high and no politician operating within the constraints of a country that has gone through such a transition (perhaps badly wrecking one of its key national industries: tourism) can possibly compete.

Editor’s Comment – see Jame’s M. Dorsey’s “Tunisia: A Case of Being Careful What You Wish For?” for an analysis on the short term results of Tunisia’s revolution.

So will Tunisia’s example lead to sweeping revolutions across the Arab world? History suggests not. Strangely enough we seem to have some kind of innate belief that such events often cascade across regions in a domino effect. Yet this is simply not true. It is worth noting that (Stephen Walt beat me too it) neither the French Revolution, the Bolshevik Revolution, Communism nor the Iranian Revolution led to any kind of ‘indigenous’ sweep of similar revolutions in nearby countries. Where neighboring countries did begin to follow, say, Communism, this was hardly the likes of the ‘natural domino effect’ that we think of but under the Soviet or Chinese boot or extreme pressure.

Editor’s Comment – also see Hisham Wyne’s “Tunisia, a Wake Up Call, but for the Pundits”  for more on the possible spread of Tunisia’s revolution.

Moreover, not only have other Arab regimes now been forewarned as to the consequences of such demonstrations, but Tunisia is hardly going to seem like a glowing advert for a post-dictatorial state in the coming few weeks and months.

Tunisia: A Case of Being Careful What You Wish For?