To be at the Show, Or not be. That’s the question 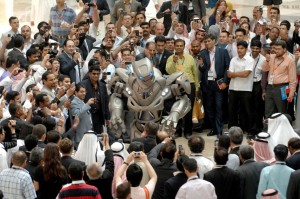 Why would several thousand people gather in a glorified tin shed for a week to be bombarded by ear-piercing classical music played on the (almost) latest technology?   Why would senior executives from major multinationals fly thousands of miles to spend hours sitting with journalists pronouncing their company’s ‘commitment to the region’ and exclaiming ‘Phew, it’s a bit warm here, isn’t it?’

Because it’s GITEX. Yes, the region’s leading information technology trade show is back and I’m sure we’ll soon be told that it’s bigger and better attended than ever.  The Show dominated an absurdly large portion of my life for a decade as I ran the Technology Practice of a large international PR firm.

You would have thought, given the opportunities to communicate afforded by the internet and the growth in social networking, that such an event would be deemed redundant.  How many times did I listen to marketing managers bemoaning the huge chunk of their budget which they had to devote to creating tat on an epic scale – over-branded polo shirts with minimal cotton content, baseball caps missing that all important bent peak, plastic pens which clicked out but refused to click back in.

‘Any compliments?’ was the calling cry of the over-spotted exhibition freebie hunter.  ‘Yes,’ I would sometimes return, ‘you’ve got a lovely tie.’   A client of mine once had a competition to see what the cheapest item was that they could pass off as a complimentary gift. They managed to give away a single paper clip to several lucky, but slightly bemused, individuals.

‘Why are we here?’ is the philosophical question of the hour throughout the five days of the Show.  For some companies the reason is abundantly clear – to flog as many boxes of technology as possible. Computer Shopper, which is the consumer adjunct to the Show is a vision of Hell with which Dante would be familiar.

Throughout the Show harassed PRs with ties scuwiff can be observed having fingers wagged at them and being addressed like naughty schoolboys (and girls) for failing to ensure that their clients secured enough real estate in the exhibition daily. Or for sending a photo that made the client look less handsome than they imagined themselves to be.

So is it all a colossal waste of time?  Absolutely not.  Deals are done,  introductions are made, old acquaintance is renewed, expertise is shared and let’s not forget, fun is had.  The reason that events such as GITEX continue to exist is that they fulfill a basic human need to meet and engage with your peers, your customers and your partners in a relaxed, semi-formal environment.  A client once made a startling, but inspired suggestion to me as we surveyed a stand whirring with leading-edge, state-of-the-art technology: ‘You know what we need to do? Get rid of all of this stuff and put in some nice cosy sofas.  That’s what these events are really all about – people meeting people.’

So at the risk of spiking a sudden hike in ‘sofas futures’ perhaps it’s time we were just a little more honest about why we have events like GITEX.