The Day I Was Deleted: A Blogger’s Nightmare Realised 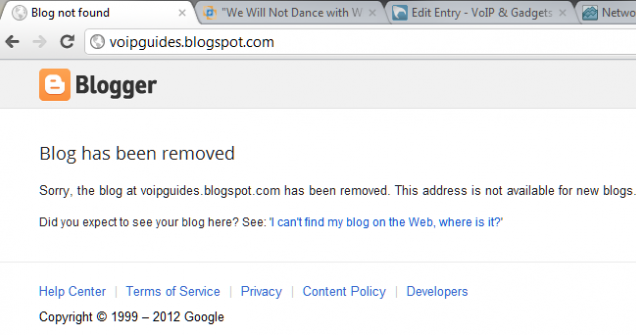 You can only begin to imagine the look on my face when I pootled over to the blog yesterday to put up a post for the day (I was going to whinge about the new Salik gates, for what it’s worth) and found the cheery words from Google (in Arabic, of course, because they insist on showing Arabic content to someone whose account preferences specify English) that my blog had been deleted. To give Google some credit, it was thanks to Google Translate I was able to find out what the hell the note the Space On The Internet Formally Known As My Blog (SPOTIFKAMB to IT people) meant.

Deleted. Gone. All of it.

It took a while to sink in. This blog has become a part of my life in ways I would never have thought possible. I’ve been feeding it words like a remorseless Tamagochi since I started it (as a frustrated writer who missed journalism) in April 2007, when I posted about the Arab Media Forum (This here post, in fact) to a readership of approximately three. I’ve been posting more or less regularly ever since – a body of work that stretches back, I realised as I made my way to the Blogger Forum to try and get some help, six years now. In all, over a thousand posts from rants about mendacious food companies through half-baked observations on the state of our media to book plugging now populate this dusty corner of the Web and I have become quite fond of it.

Every day a few hundred or so people pop by to hang out and most of them use the ashtrays and everything. Some posts have attracted thousands and thousands of readers – the ones where I expose the crap people put in their food and drink are posts I am particular proud have attracted such attention, because I think it’s important more people are made aware that Subway bread contains gunk, Aquafina is tap water and other great truths.

Why did Google do it? They never do tell you, but an educated guess (fuelled by some panicky reading yesterday) would be some sort of spammer/hacker exploit that meant a number of blogs (the UAE Community Blog and SeaBee’s ‘Life In Dubai’ were also affected and a number of other blogs were complaining of unfair deletion about the same time I was) got trashed.

A number of people kindly suggested on Twitter that I migrate to WordPress. Thanks for the suggestions, but it did feel a little like when you tweet about a PC problem and all the iZombies come crawling out to intone ‘Buy a Mac’ in their little, dead zombie voices. I like that blogger is the Barney of the blogging world, a sort of Little Tikes easy to use thing in nice, primary colours. WordPress is far to complicated for me and I have neither the time nor inclination to build my own templates and other stuff. I gave up playing around under the bonnet of technology years ago and have no hankering to go back.

I did come away from the experience with the definite feeling that Google’s fighting a 24×7 bot-war against the hackers, spammers and other manifestations of absolute evil. Occasionally that results in a few carbon based life forms getting squished. The only thing I can say is they unsquished me pretty quickly – so thanks to Nitecruzer, the entity that seems to do most of the management of anguished bloggers at the Blogger Forum. He could perhaps be politer, but this is a man tested with a constant dialogue with pissed off bloggers, so you can see how he might be occasionally inclined to testiness.

Anyway, drama over. Back to the usual hooning around and complaining about stuff… Move on, people, there’s nothing to see here. Come along, now. Let’s be having yer. And take those shinies with you…