A Corporate Conservative: Apple’s No to Drone Strike App 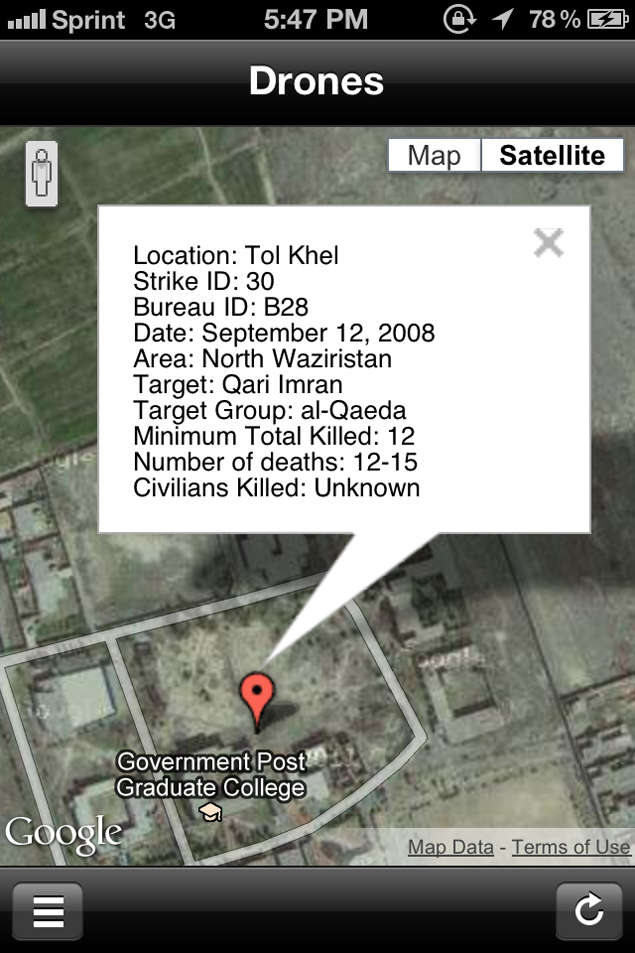 An app that uses the Bureau of Investigative Journalism’s covert war data to alert people to the far reaches of the US government’s secret wars has been blocked from Apple’s app store.

Drones+, the creation of NYU student Josh Begley, was meant to be a simple way of notifying users whenever US drones struck somewhere in the world.

But Apple decided this was not acceptable for its customers. After rejecting the app on the grounds of its design and functionality, the US tech giant finally took exception to its content.

In correspondence seen by the Bureau, the US tech giant told Begley that apps that ‘present excessively objectionable or crude content will be rejected.’

The company added: ‘We found that your app contains content that many audiences would find objectionable.’

Apple’s decision did not come as a surprise to Begley. ‘I think their position is often just they don’t want to let anything through that could be seen by anyone at any particular table that could be seen as controversial,’ he said.

But how its content could have been objectionable or crude for a user is difficult to fathom.

A basic app, Drones+ was simply a news feed summarising each entry from the Bureau’s databases and a map of the drone strikes. Each time a drone hits a village in Waziristan, a message would ping straight to the user’s handset to let them know.

The project began with a simple question about what smartphone users like to be notified about.

Begley wondered if US smartphone users would want to be told about something more challenging than ‘the sort of inane nudges you get when it’s your turn to play Words With Friends.’

He presumed not. But Apple, who could not be reached for comment on this story before publication, has made sure he will never know.

Following their latest rejection Begley is abandoning the Apple app idea. He is thinking about producing a version for the rival Android system instead.

But iphone users were of specific interest to Begley. Having schooled himself on the extent of the US drone programme, he says he wanted to push the drone debate ‘into corners where it hasn’t been discussed.’

Smartphone users more interested in the nuts and bolts of technology may go for an Android phone, he explains. Apple’s products appeal to a different crowd.

‘I think people who use iphones like them because “they just work,”’ he says. ‘Part of the reason they just work is because Apple is either very vigilant or diligent…to shape and control every aspect of the experience.’

Thanks to a handful of high profile leaks, US drones are getting some attention. But Begley believes there is a limit to how much people understand, himself included. Before starting to make the app, ‘I had a general sense of hidden drone wars but never actually had a granular understanding,’ he says.

From the start of the project one line of the drones debate grabbed his attention. ‘When I started thinking about the app I actually didn’t know about the Bureau’s data sets,’ he explains. ‘I was considering using New America Foundation’s data.’

But as the accuracy of New America Foundation’s data was challenged in the media, Begley turned to the Bureau. ‘In light of recent questions of their under reporting, and their potentially severe under reporting, it just made sense to use the best data set around.’

Unfortunately, it just isn’t coming soon to an Apple Store near you.