Online or Behind Closed Doors: The Big Saudi Discussion 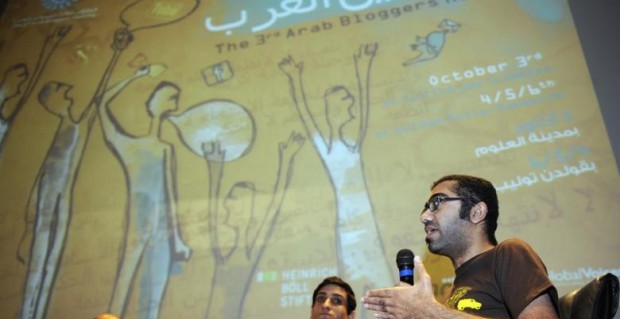 The real discussions are online, according to a piece in yesterday’s Saudi Gazette.

The article, by Laura Bashraheel, paints a picture of a young people who are taking advantage of “a manic side of Jeddah that is evolving” in order to discuss important issues online. She quoted a young Mahmoud Sabbagh as saying that he’s taken his thoughts to the Internet because the Jeddah Literary and Cultural Club was too suffocating. (Official Saudi book groups have to submit their discussion points to the government in advance.)

A guy named Ahmad (who wouldn’t provide his full name) further told Bashraheel that he believes Twitter has opened doors: “Now we can interact more freely and exchange ideas, books, events and articles on Twitter and then discuss them with all kinds of people.”

In some ways, sure.

However: 1) Ahmad wouldn’t give his name in the article, and 2) Hamza Kashgari is now in solitary confinement in a Riyadh prison for free discussion of ideas on Twitter.

So Twitter has its downsides, too. Ideas shared on Twitter, like the ones that landed Kashgari in prison, are instantly very, very public (and very easy to make into a viral campaign against the author).

Activist Waleed Abu Alkhair writes in the Washington Post today about a real-life weekly salon in his home, which seems in many ways like a better place to share ideas (at least, well, if you’re a man).

He writes: ” I started the salon after government and religious authorities clamped down on gatherings of liberal youth in cafes and bookstores in the wake of Hamza’s arrest, severely constricting the space for free expression in this city.”

Meanwhile, the Saudi pavilion at this year’s London Book Fair boasted loads of books, according to Saudi prince and UK ambassador Prince Muhammad bin Nawaf. Ahmed Al-Hamdan, chairman of the Association of Saudi Publishers, said Saudi participation is way better this year because they’ve got a whole 120 square meters.

But what’s there, in the “official” pavilion? If it’s similar to the official Saudi pavilions at this year’s Cairo and Abu Dhabi fairs, there’s a whole lot of flash and not much substance. After all, Saudi-owned Al Arabiya recently reported that “Saudi writers publish abroad to escape censorship.“

So where are Saudi’s “real” literary meet-ups? I don’t know (particularly as real is a stupid word here), but I imagine them to be in homes, in unofficial spaces, sometimes online, too; flourishing despite attempts to regulate them into disappearance.

One Response to Online or Behind Closed Doors: The Big Saudi Discussion