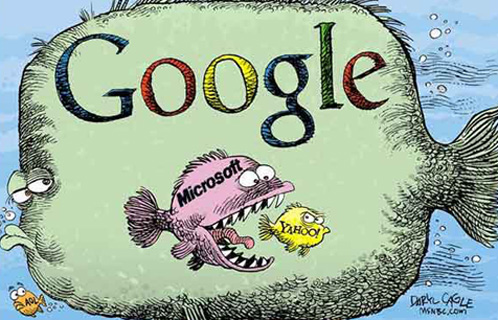 Why? Google is the dominant search company, Yahoo! still is the number one digital display advertising company – combined we’re talking about a solid gold ATM. Google + could easily replace Yahoo!’s embryonic and underused social platform (does anyone even know what it’s called?), Yahoo! Mail and Google Mail! would dominate email use (Yahoo! already dominates, GMail would just cement the position). More to the point, the funnel that leads from Yahoo! Mail to Yahoo!’s homepage, i.e. the engine that drives all of Yahoo!s traffic and therefore display revenues, would go on steroids.

How would it fit culturally? Yahoo! as a technology company has lost its way in recent years. It’s hard to believe that Microsoft would give it back its mojo. Being part of Google would in spades.

That said, Google is far more a technology company, Yahoo! styles itself on being a content company, which could signify concerns were it not for the fact that a) Yahoo! is not really a content company (it’s an aggregator of other people’s content) and b) Google has increasingly signaled it wants to be a content company.

Yahoo! is further down the road of looking like a content company without actually being one, which is probably what Google wants as well.

So what are the issues? There are massive regulatory concerns. Google already has 65% of the search market. Add Yahoo!’s 15% and you’re talking about antitrust. That’s why Google is likely to support a buyout company and cherry pick the parts it wants to buypost acquisition.

So is it likely? Honestly, 20:80 in favour of not happening – as I said the regulatory concerns are significant, but even if not successful just the rumour will drive up the price of the shares – great for Yahoo! shareholders, but very annoying for Microsoft. Which must be a bonus.