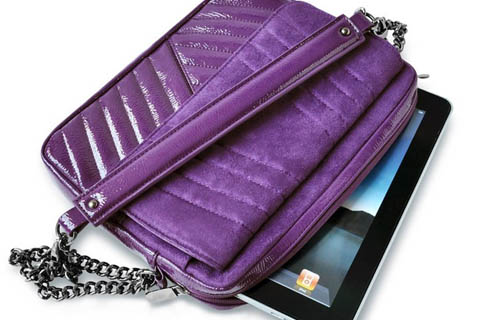 My name is Shelina and I want an iPad 2.

All morning on March 25, the day of the global launch, I wondered if I should go and queue up outside my nearest Apple Store. Should I be one of the anointed legion of iPad 2 pioneers?

I had to restrain myself from lining up to receive the sacrament of Mr Jobs’s latest offering. I pictured myself in the queue: woman in a headscarf, big pram, breastfeeding my newborn baby whilst waiting for the 5pm launch. Would I have traded in my baby to get to the front? No comment.

I used to mock the Apple zombies, with their illogical dedication to gadgets that are never quite the best available pieces of technology. I’ve concluded that Apple-worship is like being a Trekkie – either you get it or you don’t, and there’s no middle ground. And with the launch of the iPad 2 I’ve crossed over to the dark side. My computer screen is covered with drool as I gaze lustfully at its images online.

What’s not to love about the slender curves of metal and glass? It’s thin, it’s light, it connects to your TV, and it has a slidey-foldy cover that comes in at least eight colours. We won’t talk about the price tag. Or the fact that I don’t really need one. Or that a newer version will probably be released just as I’ve become accustomed to the sweepy-slidey finger movements that operate this gorgeous little beast.

Or that it seems to be a slimmer version of the children’s toy Speak & Spell that I had when I was six. Oh, that was a fabulous gadget, complete with liquid crystal display and a keyboard made of squiggly buttons. Perhaps that was the gateway drug to my current gadget craving.

The smaller and slicker these gadgets become, the more appealing they are. Especially if you’re a woman fighting the perennial problem of the overloaded handbag. And the new iPad 2 – like many other gadgets – is now teeny enough to slide into all but the smallest of purses.

According to the UK shopping chain Debenhams, the weight of the average British woman’s handbag was a staggering 3.3kgs in 2008, the equivalent of carrying three and a half bags of sugar (and the same as my newborn baby). But, as paper organisers have been replaced by multipurpose phones and laptops that themselves have become lighter, this figure is now a much more manageable 1.5kg.

It’s not the weight of the handbag – nor the gadgets that reside within it – that are fascinating; it’s the cost of the contents of the typical handbag. This comes in at more than £250 (Dh1,471). And that doesn’t include those luscious gadgets; it is just the cost of all the make-up that women carry with them wherever they go. According to Debenhams, a woman’s supply of warpaint alone is worth as much as £256 on average. In fact, nine out of 10 women said that they wouldn’t step out of the house without their mascara.

With the entry-level iPad 2 coming in at £399, it doesn’t feel that different in price to all the make-up in the handbag, and probably a whole lot less heavy to carry.

So now I have to decide: gadget or face goo? Both are about good looks and sleek finishes. The marketing hype for each tells me that I can’t live without them. The solution might be an iPad application to replace the make-up the average woman needs. It could be called iWorthit.