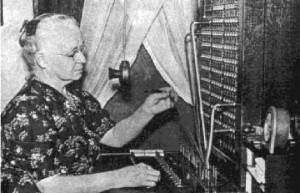 Telcos are facing something of a challenge moving forward. They are staring looming disintermediation in the face and many don’t have the faintest clue what the hell to do about it.

It’s an interesting idea, but there’s every chance that social media will end up transforming them beyond recognition and even killing a number of them off.

I got to thinking about this speaking at a telecom event recently. I came across more than one Great Question in the process. For instance, when was the last time you actually dialled a telephone number? We’ll be unlikely to ever dial numbers again. With today’s IP enabled networks, telephone numbers are actually something of a virtualisation – we don’t need numbers, because we don’t have to use circuit switches any more. We don’t even need URLs to communicate with each other, we’ve finally arrived at the point where we can all mimic the prisoner – we’re people, not numbers.

In this virtual world of Facebook phones and IP to IP connections (whether that’s between handsets or PCs), the good old fashioned telco is reduced to being the provider of ‘the pipe’. It’s sort of analogous to a road network – the company that used to provide us with our car (finance and all), maintenance, petrol and car washing services – as well as the road network we used, together with service stations and hotels, is now just providing the blacktop. From the huge logistical enterprise that gave us everything we needed for road travel (and that also ran the big lorry networks for commercial customers) – except choice, they face being reduced to toll road operators. All they’ll be is the occasional toll booth with a sleepy chap taking our payment and a crew to fill in the occasional hole. There are other companies now providing the cars, the maps, the petrol and the logistics.

Even more scary for the telcos is their coming irrelevance.

The reason that Microsoft went for Netscape is that Netscape’s gameplan was to expose APIs to applications – this meant that Windows would become irrelevant to users and be replaceable by any old operating system, because applications only care about the next set of APIs down the pancake stack that sits between you and the hardware. Telecommunications has its own pancake stack, known as the OSI model – and telcos are facing being shoved down to the transport layer. Or perhaps even lower.

Today’s social media platforms are scaring the bejabers out of operators. If I spend all my time on Google, Facebook et al – and if these platforms are providing me with my telephony connections, I don’t actually care very much about my telco – I don’t actually see the transport layer, just the applications I use. And so the telco becomes irrelevant, whether you’re Etisalat, Du, Zain, BT or Vodaphone doesn’t matter to me. I’m just buying bandwidth and I don’t really care who I buy it from apart from price and stability – and they would all be pretty much comparable in a perfectly competitive market (which regulators are there to give us).

This means operators today have a very stark choice – transform or die. I’ve been saying this at conferences and stuff for a while now. Operators need to define new business models based around selling content and services that consumers want. They need to compete in the social space, they need to build complex revenue models that use the thinking that drives services like Google, YouSendIt and AVG. They need to look at those ‘Freemium’ models, indirect revenue streams and new competencies. They need to sell the stuff that smart IP networks enable – including content. Anyone planning to continue depending on the ongoing flow of easy money across the counter, cash for credits and money for minutes, is on a one-way ticket to oblivion, baby.

If they don’t change, and I’d suggest pretty quickly at that, they’re just going to be joining the queue behind the newspapers. Like newspapers, they’re not going to die overnight – just slowly and awfully collapse in on themselves, threshing around and squawking painfully on the way down. There’ll be something left at the end, but it won’t be the telcos as we know them.  More like a number of bandwidth wholesalers. Pipe pushers…