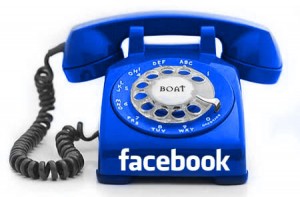 Facebook has tossed its hat into the mobile handset ring according to TechCrunch today. The move is fascinating and adds a dimension to the whole new world emerging from the competition between companies who, five years ago, you would have never have thought of associating with the phone business – principally Apple and Google.

The idea of a phone that cuts out the old number dialling thing entirely and creates connections across a social media platform is a short leap ahead from the Google Voice stuff I was waffling about a few days ago, but it’s a logical one. With the ability to make ‘analogue’ calls as well as Facebook to Facebook calls, the phone would logically use the same VoIP based technologies as MSN and Google are using to connect people directly today. The mobile Internet is about to get very hot indeed as ‘telephones’ transform into IP based devices that will support, potentially, voice and a huge range of other functionalities.

In that instance, you don’t actually need a telco or its tottering infrastructure of switching exchanges – and you won’t be paying circuit switched pricings anymore, just your flat rate monthly Internet access fee to your ISP.  Today’s traditional telco is not a sustainable business model: telcos will have to downscale and slim up to a tremendous degree or will have to find a massive new, services based, business model to add to the diminishing revenues that their decreasing importance in an Internet-driven communications model will yield.

Or they could just keep blocking everything. That’s another option, I guess…

But block or not, it is inevitable that telcos that don’t transform fast will die.