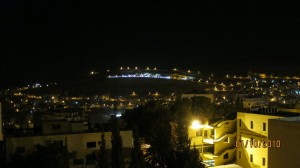 I have known Sara for years. A former colleague and current friend, she is far too talented for her own good and manages to combine a keen intellect with an absolute lack of ambition for herself. She believes in people and in the good to be found in people; something I admire particularly as I do not at all share her capacity in this regard.

She left Dubai for London some years back with a vague idea of using the communications skills she had honed in a sort of NGO sort of way. That never really happened as I fancy she thought it would until a few weeks ago all sorts of things came together and she decided to throw in London life and travel to Nablus to become a teacher.

I would contend this is not normal behaviour, but then chacun à son goût…

One of Sara’s many talents is language. She’s always had better than native English language skills (although this is not, generally, setting the bar very high. Few foreigners manage to mangle English like the English manage mangling English); I recall her once stopping a client dead in his tracks by pointing out that their encounter had been more than usually serendipitous. After all, it’s not a word you expect from an Arab girl, is it? Her encounters with ignorant English colleagues in London were relayed back to me with delighted indignation (“Dahling, I just can’t belhieve an Arab is editing my copy!”), but the fact remains that Sara has a way with words that is unusual, a keen eye for humanity and a strong sense of fairness and compassion.

When you combine these things with the whole ‘Year in Provence’ adventure of starting a new life as a volunteer in the West Bank, you could be forgiven for thinking the mixture would provide a powerful, evocative and compellingly detailed account of the experience.

And it does. Her blog is linked here and I commend it to you with all my heart. Go there now while it is still new and she is at the very opening of her adventure. Because I bet you a pound to a penny that this unfolding story will delight you as the days fly by.