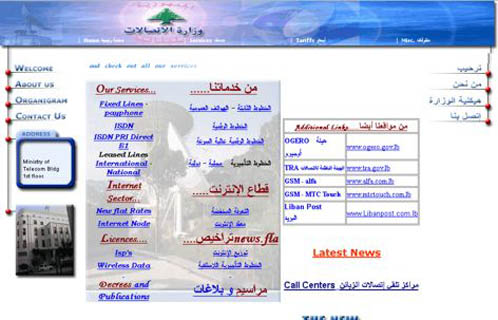 This is the Lebanese Ministry of Telecommunications website.These are the people responsible for the Internet in Lebanon.

Back in the late nineties, I travelled to Beirut in the company of Microsoft’s Middle East marketing manager to manage the opening of the company’s office in Lebanon. The trip was the culmination of a long campaign I had been involved in to have an intellectual property protection law passed that would protect IP holders from the endemic piracy in the country. The campaign was kind of successful in that the law was, indeed, passed. The law was, of course, subsequently ignored by pretty much everybody, but that shouldn’t really surprise anyone.

My marketing manager colleague was horrified* to see that there was a ledger on the visa desk, where issued visas were recorded manually. This despite the presence of a distinctly computery thing on the desk. Given MS was touting e-government pretty hard at the time, she seemed to find the presence of a totally manual, analogue thing in the middle of a process that everywhere else in the world had automated somewhat incongruous. That ledger is still there today, folks.

I mention this in the context of a few tasty finds by pal Bilal El Houri, following on from my amused post last year about old skool websites. His challenge was to find worse sites than these little beauties, all examples of quite how far down the e-government road the Lebanese government has travelled since back then. Clue: the answer is not very far, really.

The image above is from the Lebanese Ministry of Telecommunications website.These are the people responsible for the Internet in Lebanon. Yeah, yeah, I know: it figures.

Here are some other beauties. Remember, these are NOT snapshots from Way Back Machine. This is Lebabon today.

The Ministry of Higher Education

The Ministry of Agriculture

The Directorate General of Emigrants
(Their English version is a howl, BTW)

The Ministry of Industry

Thanks, Bilal. I’m not sure whether to laugh or cry…

BTW, all those years back, we visited the Prime Minister, Selim Hoss and the president, Emile Lahoud in the same day, with an MS exec in tow, a ‘veep’ if I remember right. The BBC correspondent in Beirut at the time, the wonderfully named Chris Hack, had an acid aside for that one: “Where else in the world would the president and the prime minister be rolled out to receive an effing commercial traveller?”…

* You should have seen her reaction to B018, mind…

PS: Dany Awad (@DanyAwad) adds to the charge sheet with this here link to the Electricite du Liban website! Class! And they keep coming in – this link to the brilliant National News Agency website from Amer Tabsh!