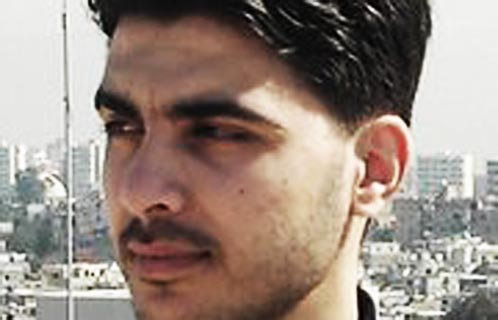 Syrian Military Security this week arrested another native blogger, Ahmad Abul-Khair, on his way back to Damascus from the coastal city of Banias. The Observatory of Syrian bloggers is now asking for his release.

Abul-Khair launched his Ahmadblogs on October 10, 2005. He is a co-founder of the popular Syrian blogs aggregator Almudawen, and an administrator at Ektob, a blogging platform.  Born in 1983, he says on his blog site that he specializes in Islamic media and is “of coastal origin and Damascene education and affinity.”

While she was in custody five months before her sentencing, Abul-Khair published a poster wishing Mallouhi a “Happy Birthday.” He had earlier written several posts in support of another Syrian blogger, Tarek Omar Bayassi, who was released from jail in August 2010 after serving three years.

Syrian Security probably took offense from Abul-Khair’s last post, dated January 17, hailing the uprising in Tunisia and hoping it would be copied elsewhere in the Arab world. Here is, in part, a liberal translation from Arabic of what he wrote in this post:

“Inspired by the revolution”
“Change is possible. That, in simple words, is the banner of the current phase — the banner of what has now become globally known as the Jasmine Revolution.

“Although jasmine is Damascus’ exclusive hallmark… the Tunisian revolution’s circumstances mirror Damascus — and much so.

“More than 20 long years of oppression, simmering resentment, frustration and oppression impelled that revolution [in Tunisia].
“… Change is possible, but by revolution!

“… Free Internet should enter the home of every student in our Arab countries. Ways and means to exploit [the World Wide Web] to bring about revival and change are paramount for all those who love and aspire for freedom…”

On September 1, 2010, Abul-Khair published a more sanguine but cryptic mini-post about his discharge from military service. In his words:

“Curtains fall on my military life… I was discharged today!”
“It’s a beautiful day.

“Thank God, I completed my compulsory and strict military service.

“Why go into details?

“What benefit the thoughts of the military?

“I shall shut out my military memories. I shall erase what I registered in my mind.

“I was discharged and I look forward to life – eagerly and passionately.

“I was discharged. That’s it.”