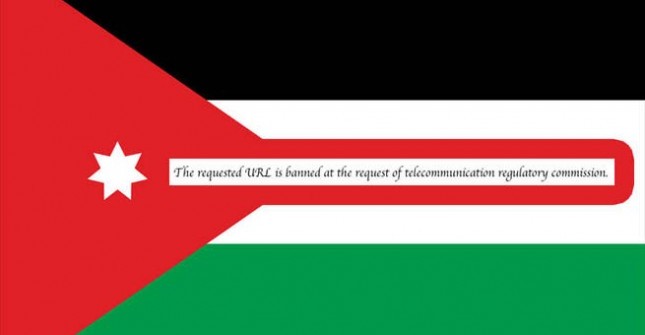 And so it begins: a ban on Jordanian news websites that have not registered and/or been licensed by the government’s Press and Publications Department:

The banning, which went into effect on June 2, came after an Internet-regulation law that passed on August 30 of last year. The law says that sites must register with the Press and Publications Department or risk being banned. Many Jordanian websites held a blackout last year in protest of the law.

Now the law has gone into effect.

In an official memo, published on 7iber, the head of Jordan’s Press and Publications Department  issued orders to the Telecommunication Regulatory Commission (TRC) to block a list of several hundred websites. According to 7iber: “In turn, the TRC commissioner has sent the list to the country’s various Internet Service Providers, demanding the blocking be implemented by the end of day, Sunday, June 2nd.”

In addition to requiring registration, the new law also holds online news sites accountable for the comments left by their readers, prohibiting them from publishing comments that are deemed “irrelevant” or “unrelated” to the article.

Ostensibly, according to Ammon News, the law “only targets electronic news websites, and will not affect social networking sites or international websites. The government stressed that the law is aimed to organize the sector and provide legal guarantees against slander and unlawful material.”

However, as the Jordan Open Source Association president  Issa Mahasneh noted in a statement, “There are many ways to circumvent the censorship, and we have seen citizens already employing these tools, not to mention that the websites themselves have began using social media to disseminate their news. Decision makers have to realise that Internet censorship is simply unfeasible, and all attempts to do so in other countries have failed.”

You can read the full list of banned sites on 7iber.