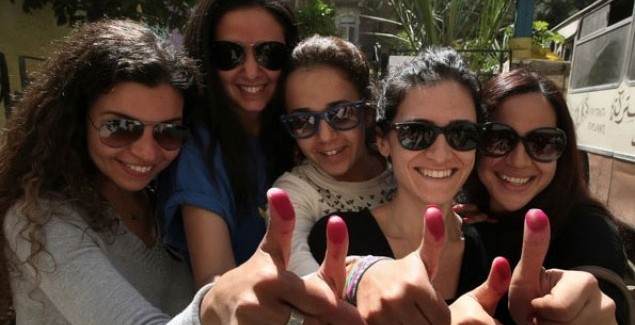 There are currently 59 women in the Tunisian National Constituent Assembly (NCA), out of the 217 deputies elected last fall to draft a new constitution. These 59 women were able to run in the elections as part of a political party either because they had demonstrated leadership in the past or because they negotiated with a particular party to be included on their list. The law governing the electoral process mandated that all candidate lists had to include an equal number of men and women, thereby establishing a baseline of equality.

Without the law on gender equality, however, would women have run for the NCA? The answer, I believe, is yes. It seems that Tunisian women are increasingly interested in actively entering the political sphere.

The final election results were mixed: 27 per cent of the members of the lower house of the NCA are women. This number is higher than many countries, but disappointing in light of Tunisians’ expectations about equality. Of the 1500 candidate lists, only 7 per cent had a female at the top, with men occupying the remaining 93 per cent top places. The head of the list was most likely to win a seat as Tunisia’s system is a proportional one – the more votes a party receives, the more seats it gains in the NCA. However, the high number of parties running in the election resulted in the failure of many parties to win a spot for their head candidate at all, or in only winning a few seats. And because most female candidates didn’t lead party lists, many found themselves squeezed out, despite their hard work.

But women are involved in the public sphere. Last February, for example, the Tunisian Association of Democratic Women (ATFD) held a short conference for women, where the attendees prepared and delivered a list of recommendations to Mustapha Ben Jaafar, president of the NCA. The AFTD requested, among other things, enshrining gender equality in the constitution. They also provided proposals for bettering several aspects of women’s lives – including increasing their presence in public life and politics; improving their access to health care, education, and job opportunities; and protecting them from violence.

Other women’s projects have also emerged, including the Collectif 95 Maghreb Egalité, a group of 40 associations and NGOs focusing on gender equality. All these projects share the common theme of promoting women’s rights to create a more just society.

Faiza Skandrani, president of an organisation called Equality and Parity, which advocates for these principles in Tunisia, held a contest on Facebook a month before the October elections. It was titled “1,000 Women’s CVs for the Constituent Assembly”, designed to show Tunisian women’s active interest in politics. Skandrani received 800 resumes from women in many parts of the country who were interested in her project. The contest provided an opportunity for interested political parties to learn about potential female candidates as they created their candidate lists for the elections.

Women are also taking positions as political leaders. For instance, Maya Jribi, who was Secretary General of the Democratic Progressive Party (PDP) in 2006, was the first Tunisian woman in charge of a political party and is currently a member of the NCA. She says that she has never seen being a woman as a problem in the political world, nor has she considered it an asset. She simply positions herself as a labour activist and a politician. She is an inspiration to many who see her achievements as proof that women can succeed in politics through their own talent and skills.

Finally, women from different groups are starting to work together. The Vice President of the NCA, Meherzia Labidi, has proposed establishing a committee made up of women from different political backgrounds in order to draw on its members’ diverse perspectives to find solutions to problems facing women.

Gradually, Tunisian women are making their debut on the political scene, which is helping solidify their hard-won gains. And as these new realities help shape the expectations of future generations, it is likely that these committed women will pave the way for young women who may someday become policymakers without facing any obstacles because of their gender.

Sana Sbouai writes for the blog Nawaat, with a particular focus on social issues.

One Response to Women ‘Taking the Lead’ In Tunisian Politics