Wikileaks, Jordan and the ‘Tentacles of Iran’ 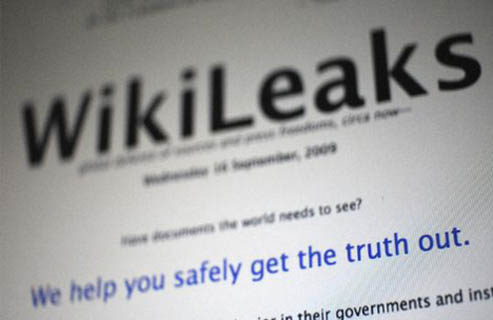 Unless you’ve been living under a rock these past 24 hours, the biggest Wikileak dubbed “cablegate” has revealed thousands of US embassy cables. The results have been obviously quite embarrassing for the US government, which has spent the better part of the past week preparing for a visit to the diplomatic emergency room, which began largely today with foreign secretary Clinton hopscotching around the world to make repairs.

It goes without saying that such cables, reflecting various thoughts and perceptions on both global leaders as well as gauging viewpoints on local and regional issues, are more reflective of truths as opposed to the usual flattery that is foreign policy. In the case of the Arab world, a region that I am positive is home to its own warehouse of classified documents just waiting to unveil history, these embassy cables have focused largely on the Iran question.

When it comes to Jordan, one particular cable is a rather clear reflection of its stance and growing concerns regarding Iran – at least based on what is highlighted thematically throughout. “Beware the Iranian Tentacles … and Cut Them Off,” reads a summary of one cable classified by US Ambassador to Jordan, Stephen Beecroft.

“The metaphor most commonly deployed by Jordanian officials when discussing Iran is of an octopus whose tentacles reach out insidiously to manipulate, foment, and undermine the best laid plans of the West and regional moderates. Iran’s tentacles include its allies Qatar and Syria, Hizballah in Lebanon, Hamas in the Palestinian territories, an Iraqi government sometimes seen as supplicant to Tehran, and Shia communities throughout the region.” [source]

The cable highlights the clandestine nature of Jordan’s foreign policy approach to Iran, an approach that can be, at best, described as cautious pessimism. A collection of viewpoints and perceptions held by the upper echolons of power in the Kingdom, this particular cable, and others like it, seem to push for US engagement with Iran to be more proactive, ranging from a military strike as suggested by Rifai, to a more moderate approach of creating benchmarks based on behavior, as recommended by HM King Abdullah.

“Bomb Iran, or live with an Iranian bomb. Sanctions, carrots, incentives won’t matter,” was how he [Jordanian Senator Zaid Rifai] put it to visiting NEA DAS David Hale in November. While Rifai judged a military strike would have “catastrophic impact on the region,” he nonetheless thought preventing Iran from acquiring nuclear weapons would pay enough dividends to make it worth the risks…

…the King told visiting U.S. Senators that U.S. should undertake both approaches concurrently but that engagement needs to be done “smartly” by setting benchmarks for behavior. [source]

There is also the general fear that US-Iran negotiations would involve the former appeasing the latter in an effort to deter it from nuclear development, all at the expense of the Arab world, or at least particularly US allies in the region. “Talk If You Must, But Don’t Sell Us Out,” concludes one cable.

Most of these perceptions are nothing new or groundbreaking, as Jordanian perceptions towards Iran, while often times avoiding the diplomatic limelight, have been in the public domain for the better part of the past decade, and more so in recent years. The metaphor of Iran as an octopus with tentacles infiltrating the region, has not been something I have heard before, but it describes the “Shia Crescent” belief once articulated by King Abdullah. While the controversial term was used only once publicly in 2004 to unpopular reception, it seems to have survived in the diplomatic corridors, but taking on a different metaphorical representation – a less subtle octopus. However, in contrast to what other Arab leaders have had to say regarding Iran, it goes without saying that Jordanian leadership lands on the safe side of thing.

As for cablegate itself, according to the breakdown of the Wikileaks data, Amman is one of the top places in the world from where these embassy cables originated, ranking second in the region after Baghdad. Of 4,132 cables sent from the US embassy in Amman, 1,726 were marked “confidential”, 421 as “secret”, 2,165 as “unclassified”. The first leaked cables were from 2002, so it may be safe to assume that the sheer volume of these cables coming out of Amman are indicative of the embassy’s role during the invasion of Iraq.

It is doubtful that any of this will likely have a local impact, whether on the Jordanian street which is still largely suspicious of Iran despite its arm flexing in the region when it comes to Israel and the US, or in the form of any kind of coverage on this issue in the local traditional Jordanian media, specifically with regard to Jordan’s role. But in the spirit of wikileaks and the new world order of information, let’s see what happens online. 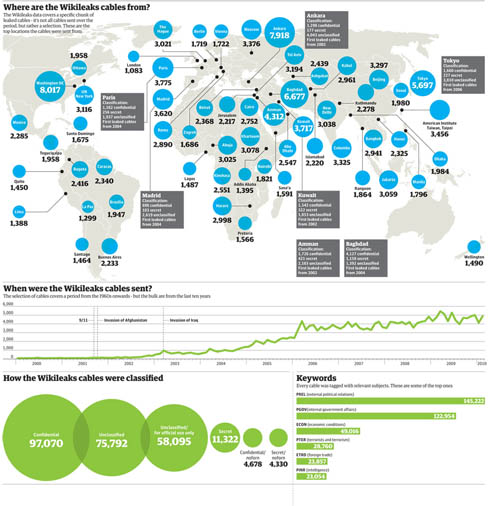 2 Responses to Wikileaks, Jordan and the ‘Tentacles of Iran’