Where is the Palestinian Ghandi..? Shot in the Head Already 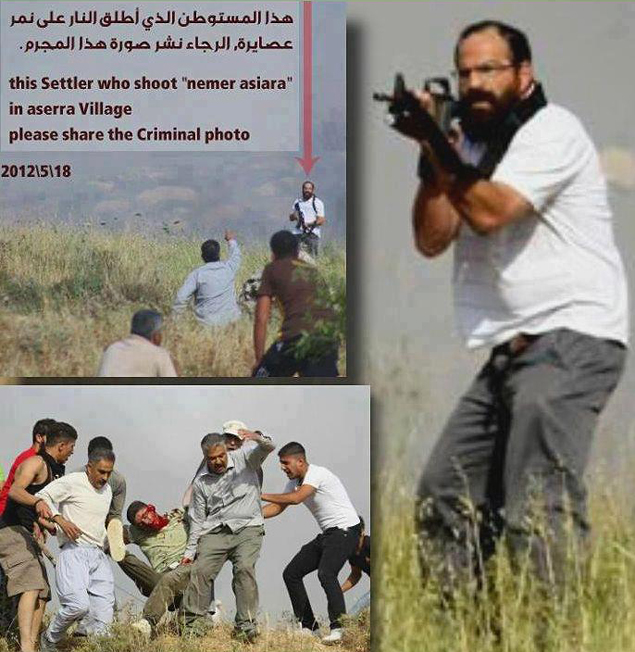 UPDATE: Sheera Frenkel has spoken to the victim’s family and tweeted to me that the bullet entered by his cheek and exist by his ear.  So by the grace of God it didn’t enter his brain, though it easily could have.

These settlers are terrorists, but their government will not bring them to justice.  That is the crime.  That is where the Gorenbergs of the world should focus all their energy.  He should identity this settler and demand the police arrest him.  He should bring his liberal Zionist friends to the settlement and knock on the man’s door and make a citizen’s arrest (if such a thing is possible).  And if the police won’t arrest him he and his liberal Zionist friends should camp outside the police station until they do.

But it’s so much more appealing to blame Palestinians instead of looking in the mirror to see where the real problem lies.  It’s also appealing to smear critics like me by calling me an anti-Zionist in the pages of American Prospect instead of dealing seriously with the criticism.

Here is B’Tselem’s report on this incident.  It makes clear that not only were police and IDF present at the shooting, that they did nothing to stop it.  In fact, one shooter used a military issued rifle and was likely a soldier on leave and another was likely a police officer similarly off duty (or at least not in uniform):

On Saturday, 19.5.2012, around four thirty in the afternoon, a large group of settlers descended on the eastern outskirts of the village ‘Asira al-Qibliya, from the settlement Yitzhar. B’Tselem volunteer photographers filmed the events from two angles. The video shows the settlers, some of whom were masked and armed, throwing stones at Palestinian homes, and fires beginning to burn.  One of the masked settlers was armed with a “Tavor” rifle which is only used by infantry soldiers, raising the suspicion that he is a soldier on leave.

Palestinian youths from the village soon arrived and threw stones at the settlers. A few minutes later, soldiers and Border Police officers arrived at the scene. During these moments, the video records the sound of several rounds of live ammunition being fired, but does not show its source.

The firing injured village resident, Fathi ‘Asayira, 24, in the head. He is seen being evacuated from the area by a group of youths. He is hospitalized in a stable condition in Rafidiya hospital in Nablus. About fie other Palestinians were injured by stones.

The video footage raises grave suspicions that the soldiers present did not act to prevent the settlers from throwing stones and firing live ammunition at the Palestinians. The soldiers did not try to remove the settlers and in fact are seen standing by settlers while they are shooting and stone throwing.

B’Tselem wrote urgently to the Judea and Samaria Police requesting that those involved in the violent attack are arrested and prosecuted. Additionally, B’Tselem wrote to the Military Police Investigative Unit (MPIU) requesting that a military police investigation is opened at once into the suspicion that the soldiers did not adhere to their obligation to protect Palestinians from settler violence, and that one of the attackers was a soldier on leave. B’Tselem additionally requested that the soldiers are instructed to cooperate with the police investigation and identify the suspect in the shooting.

Here (and here) are the B’Tselem videos of the assault on the Palestinians.  Though B’Tselem has demanded an investigation, we all know what the result will be – no result.  A pro forma investigation in which the case will be dropped for lack of evidence or for lack of interest or for whatever reason the army and police choose.  The reason: “injury while Palestinian.”  Now, our big, brave pro-Israel readers will come forward and remind us that Palestinians threw rocks and therefore what should they expect.  But keep in mind that the settlers, according to B’Tselem’s statement, not only threw rocks first, but had deadly weapons and used them, while the Palestinians had none.

While I do not support violence on either side, can anyone except the pro-Israel flacks not understand how homicidal behavior such as this is one of the single most incendiary elements of the conflict?

Put yourself in the shoes of anyone who was at this incident.  Or any Palestinian who sees the video.  What would you think?  What would you do?  Ehud Barak already knows what he would do.  He’s already said publicly in one of his rare moments of truthfulness and candor that if he were Palestinian he would be a militant.  Personally, I know that I would not be.  But I do know that I’d find other ways to resist:  I do know that that could be me out there in the line of fire were I Palestinian.

Once again, I say that these settlers are Jewish terrorists and that a State which permits their rampant violence aids and abets terror.  The State is an accessory after the fact.  I pray that sometime down the line the settler leadership and military and police commanders who stood by and did nothing while this attempted murder happened will be tried before an international criminal court for their reprehensible behavior.  Like the militia leaders of Croatia and Serbia during the civil war, who were tried and convicted for their collusion with ethnic killers, these Israelis too are no less guilty.

Know that the world will hold you accountable.  That you do not represent Judaism as I and most Jews know it.  That Jews with any moral sense renounce you just as most Muslims renounce Al-Qaeda terrorists.  Any Jew or Jewish organization that does not explicitly renounce this chilul haShem is not worthy of the support of anyone in the Jewish community.