Bahrain: A Headache For Obama and Blatter 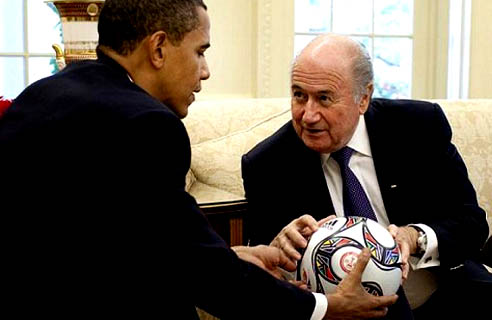 US president Barak Obama and Sepp Blatter, the head of world soccer body FIFA, share the same headache: what to do about Bahrain?

So far, Messrs. Obama and Blatter have essentially shied away from confronting the issue of the suppression of pro-democracy demonstrators, including some of the country’s most prominent soccer players.

The protests in February and March that started with Shiites and Sunnis standing shoulder to shoulder were an expression of frustration about years of failed dialogue over the need for more equitable housing and land policies, fairer representation in parliament and constitutional reform.

The crackdown and the government’s insistence that Iran had instigated the protests aided by a Shiite fifth column transformed the situation into one of sectarian tension. To be sure, there was violence on both sides of the sectarian and political divide during the protests but healing of the wounds is likely to prove difficult if not impossible without a genuine dialogue and members of the security forces being held accountable.

The US has been quietly but unsuccessfully urging King Khalifa for years to engage in a dialogue that would lead to democracy. Mr. Obama in May cautioned that it was difficult to conduct a national dialogue with people who have been incarcerated. Bahrain has since released a number of its detainees, including opposition members of parliament and national team players, but referred some of them to security courts.

Mr. Blatter has questioned the Bahrain Football Association (BFA) about credible reports of retribution against the soccer players and officials who allegedly had participated in the anti-government demonstrations as well as predominantly Shiite Muslim clubs. The FIFA president however appears to have accepted at face value the BFA’s statement that no sports players or officials were disciplined or harassed because of their association with the people power uprising earlier this year that was brutally crushed – a statement that flies in the face of reporting in Bahrain’s state-controlled media and reports by people involved in Bahraini soccer.

For both Mr. Obama and Mr. Blatter, the issue is what is the price of postponing the inevitable?

The widespread sense of discontent remains with a deeper than ever sectarian divide that makes the status quo in Bahrain unsustainable. The crackdown has pushed the uprising out of the capital and reduced it to street skirmishes in villages. A government-inspired national dialogue has all but failed. An independent investigation into the crackdown has yet to prove its integrity and independence but is credited for some of the prisoner releases.

Mr. Obama’s reluctance is strengthened by the fact that he does not want to put at risk the US Navy’s Fifth Fleet base on the Gulf island. Nor does he want to cross what is a red line for Saudi Arabia: a push for the introduction of a constitutional monarchy in one of the six members of the Gulf Cooperation Council (GCC), the spread of people protests in the Gulf and last but certainly not least, the emergence of a Shi’a majority government.

Similarly, Mr. Blatter has seldom sought to rock the boat in the Middle East and North Africa despite the region’s violation of multiple FIFA rules and regulations. The wearing of the hijab or Islamic headdress by Iranian and deeply religious Muslim women players has been the one exception, and only because, according to Western FIFA officials, it clashes with Mr. Blatter’s strong Catholic beliefs.

The coming months are likely to highlight the pitfalls of the choices Messrs. Obama and Blatter have so far made with regard to Bahrain.

The trials against members of parliament, medics, and democracy and human rights activists put on public display the government’s repressive measures as well as the lack of straightforwardness on the part of Bahraini institutions like the BFA and raise serious questions about the choices made by Messrs. Obama and Blatter.

The recent recruitment of additional Sunni Muslim Pakistanis for Bahrain’s special forces, riot police and particularly the National Guard that led the crackdown, can only serve to deepen cleavages in a Sunni-ruled predominantly Shiite society. Shiites are reportedly barred from joining the security forces – a clear sign of the regime’s lack of confidence in its own citizens. That is reinforced by a widespread belief that the Pakistani recruits will ultimately be granted Bahraini citizenship.

The cleavages are visible across society and nowhere more so than in soccer. They cut, for example, straight through Al-Ahli SC, the one Bahraini club that was non-sectarian, neither Sunni nor Shiite, and won the kingdom’s top league title last year.

The government’s decision to suspend the island’s league during the protests to ensure that the soccer pitch did not become an opposition rallying point didn’t stop players and others involved in soccer from taking sides in a confrontation that has left Sunnis and Shiites deeply divided about the relationship between their communities and the future of their country.

Shiite brothers A’ala and Mohammed Hubail, who also played for Bahrain’s national team, joined the protests. Two of their Sunni fellow players meanwhile hooked up with pro-government gangs that roamed the streets attacking the protesters with clubs and pickaxe handles.

Al-Ahli is owned by Bahrain’s wealthy Sunni merchant Kanoo family. Most of its players and its fans are Shiite, “We are one family. We never thought about whether you are Sunni or Shia,” said Al-Ahly chairman Fuad Kanoo in an interview with The Economist.

Once the protests had been violently suppressed, some 150 Shiite players, referees and officials were dismissed or arrested on the orders of a committee led by King Kahlifa’s son, Nasser bin Hamad al-Khalifa, in a bid to root out athletes who had participated in the protests. Among those penalized were six Al-Ahli players.

The Hubail brothers were detained as they were training and allegedly mistreated in prison after first being denounced on state-run television. Muhammed Hubail was sentenced in June to two years in jail, but released on bail after FIFA questioned the Bahrain association.

Mr. Obama’s dilemma has been for much of this year his struggle to reconcile US principles and values with his country’s short-term interests. So far, he has been able to reasonably manage that in Tunisia, Egypt, Libya, Syria and Yemen. Bahrain, however, could well prove to be his litmus test. For Mr. Blatter too, Bahrain could turn out to be a public display of failing to in the words of US Secretary of State Hillary Clinton get on the right side of history.

James M. Dorsey is a senior fellow at Nanyang Technological University’s S. Rajaratnam School of International Studies and the author of the blog, The Turbulent World of Middle East Soccer.