What Meshal’s Visit Really Means for the Future 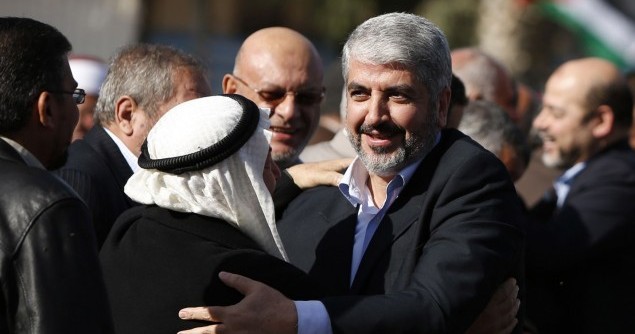 A few days ago, Khaled Meshal made a triumphal, first-ever visit to Gaza to celebrate the 25th anniversary of Hamas’ founding and the movement’s “triumph” in Operation Pillar of Cloud.  Hundreds of thousands of Gazans greeted him as he delivered a hardcore message of defiance to Israel.  He avowed, in a statement that likely deliberately echoed the Likud motto, that the resistance would liberate every inch of Palestine from “the river to the sea.”

I am not about to defend the extremism or intransigence of Meshal’s message.  But I will explain the important aspects of this speech, his visit to Gaza, and what they portend for the future.  First, while Meshal may’ve delivered an unyielding speech, he is known as a far more moderate and flexible leader than his Gaza-based Hamas counterparts.  Mahmoud Zahar, for example, the Hamas foreign minister, has refused to participate in any public events with Meshal.

That means to me that there was a certain element of political theater in Meshal’s speech.  He was in a sense coming into the lion’s den in Gaza.  A place that had just successfully resisted an Israeli onslaught and won major concessions from Israel in the ceasefire agreement.  He could not very well sound like Mahmoud Abbas or Salaam Fayyad before such people.

There were several important aspects of this speech that should be noted.  In what must’ve been a shocking moment for many who attended, the flags of Fatah joined those of Hamas in the crowd.  Instead of warring with each other, the rivals buried the hatchet, at least for the day if not longer.  Meshal made a point of affirming it is critical that Palestinians unite and solve their differences.  This may signal the resurgence of a move toward a national unity government, a goal that has eluded both factions for the past six years, since Fatah launched a failed coup attempt at the behest of Elliot Abrams and the Bush administration in 2007.

Several observers have commented on Meshal’s future ambitions.  It’s fairly clear that there is substantial resistance to his moderate course among the Gaza Hamas leadership, including Haniyeh and especially Zahar.  The group’s ultimate leader announced a few months ago that he would be stepping down from his position.  Egypt allegedly requested that Meshal remain Hamas’ leader for the time being.  But he won’t stay forever.

If Hamas and Fatah can mend fences there will be new Palestinian elections.  It is quite possible that Meshal might run for president of the PA.  Replacing Abbas, someone who’s outlived any usefulness he ever had, would breathe new life into the PA under a unified banner.

All of this is deeply alarming to the Likudist government, which sees Palestinian unity as a dagger in Israel’s heart.  The loss of a quiescent PA under the Fatah-led rump regime would be a major blow to the Occupation.  Israel wants either to maintain the status quo of Israeli domination of a feeble PA or to negotiate an agreement that offers little to the Palestinians and much to the Israelis.  With Meshal leading the PA, the Palestinians would likely present a far tougher negotiating position.

It is not Meshal’s terrorist past or his rejectionist rhetoric that Israel fears.  It is his status as an effective leader who might actually deliver a real peace deal, but one which would demand more compromises than Israel is willing to make.

If Israel and especially the Obama administration were far-sighted and pragmatic they’d realize that a PA under Meshal, that represented all the Palestinian people, would be a political entity that could negotiate a real, lasting peace agreement with Israel.  They would free Marwan Barghouti from an Israeli prison so that he could become prime minister under Meshal and lead a true unity coalition.  But they are neither pragmatic nor far-sighted and will not rise to the occasion.

If Obama continues to reject Hamas, he runs the risk of maintaining a U.S. policy that becomes so out of touch with reality on the ground that events take their course without this country being able to play any meaningful role.  This is precisely the posture we were forced to adopt during the Arab Spring.  Our former strongmen allies fell and we were so neutered by our support for discredited oppressive regimes, we couldn’t take up the cause of democracy and reform as we should.  This will happen with Hamas as well unless we change our tune.

There will be those among the pro-Israelists here who will quarrel and say that anyone who has called for the liberation of all of Palestine and said Israel was illegitimate is someone with whom peace is impossible.  To them I say, Yitzhak Shamir once bombed the King David Hotel and assassinated Count von Bernadotte.  Begin once massacred Palestinians at Deir Yassin.  Sharon slaughtered Palestinians at Kfar Qassem and encouraged the Sabra and Shatilla massacre.  Yitzhak Rabin called for breaking the bones of Palestinian protesters.

Politicians say lots of things which they may or may not mean when they say them, while their future actions belie those earlier statements.  What interests me is not the boilerplate praise for the resistance, but the concrete evidence that he is a leader who understands the need for flexibility in resolving the conflict.

A final important note on a major mistranslation of one particular phrase in Meshal’s speech as covered by the Observer and the Guardian.  It was especially disconcerting that this error was reported by Harriet Sherwood, who is an otherwise excellent Guardian Israel correspondent.  Their original reports quoted  Meshal saying:

We don’t kill Jews because they are Jews. We kill the Zionists because they are conquerors and we will continue to kill anyone who takes our land and our holy places … We will free Jerusalem inch by inch, stone by stone.

As Electronic Intifada pointed out, the Arabic root for “kill” and “fight” are similar.  But any Arab speaker would know that the specific form of the word Meshal used in the speech meant the latter and not the former.  In fact, the Guardian corrected the mistranslation and noted the error.  Though the original version will doubtless be heralded by MEMRI and all the other hasbara outfits that live for this stuff.