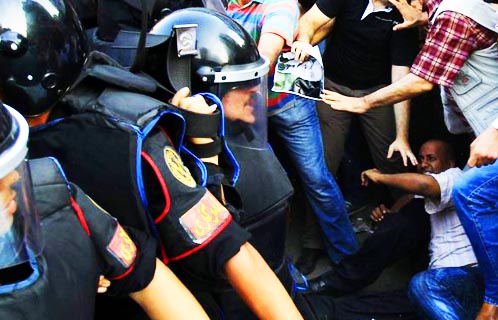 As I write this article, a television screen in my office at Al Arabiya broadcasts images of brave Egyptians lining up, in the face of intimidation and uncertainty, to elect a new parliament. It’s a spectacle I wouldn’t have imagined only a year ago – but it’s also consistent with the unprecedented elections in Tunisia and the now realistic hopes for future democratic strides in Libya and perhaps Syria and Yemen.

I’m troubled, however, by the widespread fears that come along with these laudable democratic experiments. Arabs everywhere wonder whether Egypt’s military rulers will deny the new parliament its due authority, and whether Tunisia’s newly elected leaders from an Islamic political movement, having won their right to govern, will seek to deny others the right to compete with them in a free marketplace of ideas. Political activists region-wide have the right instincts on these issues: they want the democratic experiments to be both real and sustainable. But so far, few have articulated a coherent platform or strategy by which to reach these goals.

Meanwhile, another spectacle that riveted the region only a few months earlier has largely receded from the public discussion: the trial of former regime elites, from Egypt’s Hosni Mubarak and his family to stalwarts of Tunisia’s former regime. There is general agreement in the region that it is right and just to hold corrupt elites accountable for their abuses – but in doing so, to grant them the right to a fair trial that they would never have granted to their own citizens.

There is a relationship between the region’s new electoral experiments and its experience with retributive justice: the need to establish the rule of law. This concept encompasses equality before the law, establishment of law and order, efficient and predictable application of justice, and protection of human rights. By “rule of law,” I mean a system in which all of a country’s citizens are held equally accountable to just laws written and overseen by the people.

These are relevant to the burning issue of the day: how to ensure good governance and an ongoing rotation of power after elections are held. At first, free elections may seem to be a sure manifestation of democracy, but they may be nothing but a symbol – unless the rule of law is applied to consolidate and guarantee the democratic way of life.

In the long run, the rule of law is the ideal framework for a culture that is committed to tolerance and open to diverse viewpoints. It can prevent “political thuggery” used to intimidate opponents and competitors, and/or the misuse of religion as a policy instrument to prohibit freedom of expression.

During the voting process itself, there is nothing to allow competing political parties to jointly supervise a fair electoral process and vote counting (or to allow international observers unrestricted access to voting mechanisms) except the principles of the rule of law. These principles are there to prevent unfair domination of voting mechanisms or the manipulation of the results. Furthermore, such principles can also play an essential role after the results of the election by empowering opposition parties to play a role in publicly critiquing the ruling party for its mishandling of the country’s affairs, if this is indeed the case.

Looking ahead to the days following Arab elections, we know that the rule of law remains weak in most Arab countries. Arabs now have a golden opportunity to begin reshaping their future by evaluating candidates and new ruling parties in accordance with their commitment to these principles. This would be a way to prevent winners from abusing their new found powers by building a new dictatorship and thus blocking future free elections, or prejudicing their outcomes. Without striving for the rule of law, we effectively guarantee a return to the starting point – and new monopolies on power in the Arab world.

Nasser Al-Sarami is Head of Media at the Al Arabiya News Channel in Dubai. This article was written for the Common Ground News Service (CGNews).