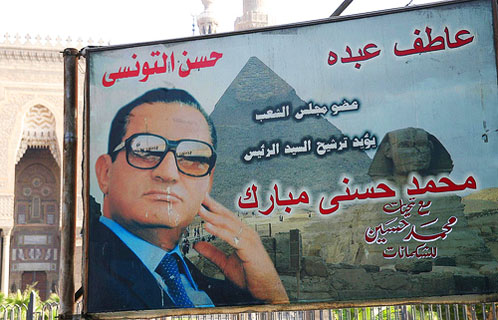 There’s a segment of people among the Arabs who are hoping that Hosni Mubarak survives, to spite the protesters demanding his removal from office. Yes, to spite them.

These are the same people who up to 2 weeks ago in fits of pseudo-nationalism labeled the Egyptian president an “American and Israeli stooge”.

They are now, like the Israeli government, hoping that Mubarak will survive.

These people are citizens of Arab countries whose totalitarian regimes have been in power for 3,4 or 5 decades, whose gross human rights violations have been meticulously documented, and who have generally failed in every aspect of state and society building. This includes infrastructure, education and healthcare.

Where the regime has succeeded is in intimidating the people to the extent that they have become brainwashed, convincing themselves that by defending these dictatorships they are displaying patriotism.

I guess they missed the lesson I was giving 2 weeks ago to a couple of 9-year-olds: “You can hate your government but you always love your country.”

I recall having a conversation with a someone following the death of his long-serving president. “How did this guy die? He doesn’t die,” he said. And someone else who at one point got teary eyed added, “From the day we opened our eyes to the world he was there.”

Which makes me wonder to what extent some Arabs have been domesticated, trained to be almost entirely dependent on a pervasive figure and obsequiously accept what seems to have become a terminal case of I-love-u-leaderitis.

There are too many Arab countries that have been almost mummified, frozen in time and hang in a state of suspended animation…

These countries are easy to spot: The leader is on the front page of every newspaper, in every book, butcher and coffee shop. He is viciously defended in political arguments and debates and highly complimented on his patronage of science, sports, the environment, education, you name it, and, of course, his political acumen and prowess.

They are the face looking down from statues and giant portraits and billboards. They are the leader on the balcony saluting the throngs driven to salute him; standing there with his palms clasped together in the classic solidarity gesture that to me reads, “I will crush you.”

A recent post on Facebook of one such pro-regime person goes something like this: “A convoy of 60 cars is driving around demonstrating in support of the leader.” (Maybe they can’t march, in too much of a hurry, gotta finish this demo and go home for dinner. That’s dedication to a cause for you!  But what can you say; it’s a case of a spontaneous outpouring of I-love-u-leaderitis)

And here’s another gem:
“To be a (fill in the nationality) means:
You’re a lion on land
An eagle in the air
And a shark at sea”

Have you noticed that these are all predatory creatures? There’s a power – and superiority-complex hanging heavily over these people, but I’ll leave it to trained psychologists and sociologists to analyze.  If it weren’t so sad it would be funny.

The problem is that these same people in rare moments of candor will tell you how brutal their regimes have been, how hellish their countrymen’s lives are, they will talk about the torture, corruption, cronyism, resorting to buying (smuggled) black-market medicines for their children and the scholarships that will only go to the ruling party’s offspring rather than the truly bright and deserving. The list goes on and on.

They are like the abused wife who, in a torrent of tears, displays the bruises and spills the beans to her family and girlfriends about the brutal beatings her husband subjects her to and how intolerable her life has become and how she can’t stand it anymore.

But when someone tries to intervene or urges her to rectify things she springs to the abuser’s defense. Isn’t it he who provides the food and security, isn’t he the father and leader of this house?

That’s the case of the domesticated Arabs suffering from the abused wife syndrome.

They like to pretend, or maybe they are truly convinced, that they enjoy the beatings and abuse because it makes them tougher and creates a strong and united household. Perhaps deep inside them they resent the injustice, don’t accept the censorship on the internet, know that innocent and genuine patriots are imprisoned for expressing opposition to an unjust regime.

Patriotism is one thing but subjugation entirely another. Freedom is precious and it doesn’t come cheap.

I am convinced that there are many millions more Arabs who have a sincere wish for liberty, progress, dignity and positive change than those clinging to the hollow words, inflexible positions and empty slogans of nationalism while continuing to take a beating at home.

This is an indictment of those Arabs who close their eyes to the intimidation and injustice and pretend all is well. It is how we have regressed so far and relinquished our right to contribute positively to the growth of our societies and, subsequently, the progress of the world.  It is about the respect we crave but have yet to earn.

And this is a salute to those who have risen to shoulder the heavy burden of the ultimate quest, the long walk to freedom. Just ask Mandela.

2 Responses to The Arab World & the Abused Wife Syndrome