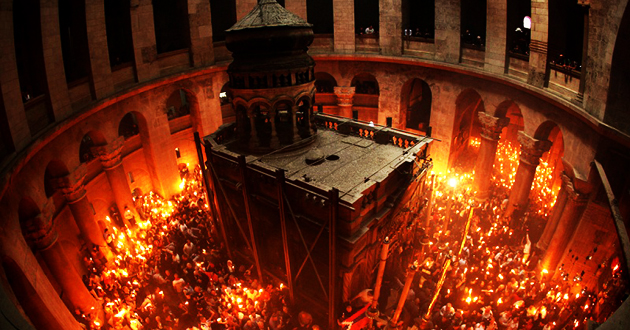 For Arab and Palestinian Christians, Easter is regarded as the most important holy day. It is the foundation of their faith, commemorated since ancient times as the day that marks the birth of their church.

Palestinian and Arab Christians celebrate Easter with an after midnight mass. I still fondly remember the joy of joining local villagers in a procession along a steep path to the top of a mountain with village elders leading the way with olive oil lit lanterns, and a parade of children clasping freshly cut spring flowers.

I cherish the memory of the beautiful soft light emanating from the candle lit church, the faint smell of incense as we entered its courtyard and the sight of the large frame of the ‘Khoury’ (the pastor) in the church doorway waiting to bless the faithful entering the church sanctuary, including the few Muslims like myself who could not resist the beauty and calm spirituality of the event.

Sadly many Palestinian Christians today are prevented from enacting the core and most important devotional act of their faith by the security ‘initiatives’ of Israeli military forces. And, if life was not already difficult enough, practicing their faith has been put in greater jeopardy today because of an onslaught on Palestinian churches by the Chair of the US House Foreign Affairs Committee in the US.

During the last week of Lent Rep. Ros-Lehtinen (R-FLA) imposed several restrictions on US/PA funding. She held US money allocated for Palestinians in Congress for eight months until her restrictions were taken into account. Among her many itemized restrictions she opposed granting Palestinian students scholarships, and the funding tourism to Christian sites in the West Bank and Gaza. She insisted on defunding projects that would improve Christian Palestinian churches.

Rep. Ros-Lehtinen eliminated funding for several USAID projects that would help rebuild ancient Christian sites in the West Bank including the Christian early Byzantine sanctuary Burgeen Church near Jenin, Bethlehem’s Shepherd’s field  as well as several other church rebuilding projects that would have helped the 50,000 Christian Palestinians.

Some may wonder why would Rep. Ros-Lehtinen specifically defund rebuilding ancient Christian Palestinian sites considering her affiliation with the Episcopal church. The church has built a strong relationship with the Anglican dioceses of Jerusalem that would benefit from such funding.  The answer may lie in her political paymaster, Irving Moskowitz, a well endowed Florida  businessman openly opposed to a two state solution who has made it his mission to fund and support illegal Israeli settlements in the heart of East Jerusalem. More probably the answer may be because of Christian Palestinian calls for the ending of the Israeli occupation non- violently.

The Palestinian Christians call to action, named Kairos Palestine: A Moment of Truth, has grown organically from Palestinian Christian roots. It is a non-violent call to peoples of all faiths to resist the injustice of the 45-year-old occupation of Palestine.  Kairos asks world Christian churches that have traditionally opposed the occupation of the West Bank and Gaza since 1967  to ethically and non violently divest from corporate profiteers of the Israeli occupation.

Their call has been heard by several US Christian leaders as well as Jewish Rabbis who are supporting Church  divestment initiatives from US companies investing in Israel’s illegal occupation.

Should this indeed be the reason behind Rep. Ros-Lehtinen’s baffling stance on aid, Christian Palestinians have just become another causality of our congress’s obsessive support for Israel, right or wrong.

They too now have a glimpse of the wrath of our legislature and those who fund it for daring to speak against the occupation.

For a liberal sprinkling of irony, to justify Palestinian Christian subjugation and to nullify the Palestinian Kairos call, prepare for a barrage of articles on how well Palestinian Christians are treated by the Israeli military occupation, and how their right to worship is guaranteed by Israel’s constitution – which has been suspended since 1949.