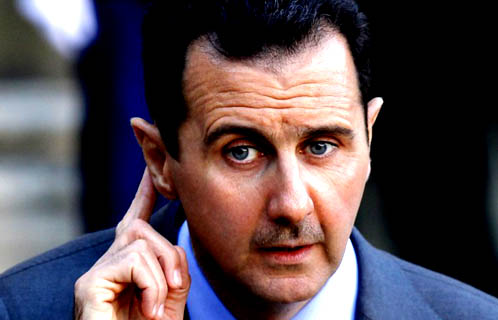 The Obama administration’s hopes that sanctions to be imposed on Syria as well as Syrian President Bashar al-Assad and his family will spark dissent within Syria’s political leadership as well as the armed forces whose senior ranks are part of the country’s economic elite. To achieve that, the administration is looking to the European Union and Turkey to ensure that the sanctions hit where it hurts most: the pockets of those on which Mr. Assad’s power rests.

The sanctions that are likely to target among others Mr. Al-Assad’s brother Maher al-Assad, the commander of the Syrian army’s elite fourth division who is widely seen as the second most powerful man in Syria, as well as the president’s business tycoon cousin, Rami Makhlouf, would freeze assets in the United States as well as ban US institutions and citizens from conducting business with people and entities placed on a US Treasury list. It would also ban those sanctioned from travelling to the United States.

The Obama administration has been working hard behind the scenes to enlist the EU and Turkey in its efforts to isolate Syria and its key officials because of their close economic ties to Damascus. This would ensure that the sanctions are not largely symbolic.

The administration also hopes that the sanctions will be at least tacitly endorsed by Gulf States to whom Mr. Assad has increasingly been looking for investment. The lack of US leverage on Syria is evident in the fact that earlier US sanctions, including the banning of transactions with the Commercial Bank of Syria in 2006 and with four government-related research organizations accused of working on the proliferation of weapons of mass destruction have had little impact.

The administration’s efforts appear to be bearing fruit with the EU. EU foreign ministers are discussing travel bans and asset freezes of their own. EU members of the United Nations Security Council have also joined the United States in circulating a draft statement that would constitute a first step towards the Council making sanctions legally binding on al UN members.

The statement’s language would condemn the Syrian government’s use of violence against protesters, call for restraint and support calls for a UN investigation into the killing of demonstrators. UN sanctioning of Syria would follow the pattern of the imposition of a no-fly zone on Libya, which involved an initial statement followed by two successive Security Council resolutions.

UN-endorsed sanctions may be needed to bring Turkey, which has been forging close economic ties with Syria in recent years, on board. Turkish officials did not reject sanctioning Syria out of hand in recent meetings with US officials, including Leon Panetta, Director of the Central Intelligence Agency. The officials hope however that Prime Minister Recep Tayyib Erdogan of Turkey may be able to persuade Mr. Assad to press ahead with political and economic reform in a bid to avert the Syrian crisis from escalating into civil war.

That may be a long shot. Mr. Erdogan pressed Mr. Assad on the issue in a telephone call on Wednesday, a day after speaking to Mr. Obama by phone. Turkey fears that sanctions that would impose economic hardship or a deterioration of the crisis in Syria could prompt large numbers of Syrians to seek refuge on the Turkish side of the border in a repeat of the mass influx into Turkey of Iraqi Kurds in 1991 during the first Gulf War.

The US and Europe further run the risk that sanctions will prompt Mr. Assad’s closest associates as well as the military elite to close ranks because their economic interests are tied to the regime’s survival.

Military officers and their families as well as members of the president’s family built their empires on monopolies and import licenses granted to them by Mr. Assad and his father, President Hafez al-Assad, whom he succeeded a decade ago after the elder Mr. Assad’s death.

Mr. Assad’s cousin, Rami Makhlouf, controls significant segments of the oil, gas and tourism industries. A son of former defence minister Moustafa Tlass is a sugar tycoon while another owns a chain of hotels. They would almost certainly be deprived of those perks if Mr. Assad falls.

The US and Europe are also banking on the fact that a late March Assad family council on how to deal with the mushrooming crisis saw hardliners led by Maher al-Assad pitted against those favouring appeasement of the protesters. Differences surfaced with Mr. Al-Assad’s uncle Rifaat Assad, widely seen as responsible for the 1982 crackdown on the Muslim Brotherhood in Hamas, and his son Ribal warning that Syria was heading toward civil war. Ribal has fuelled the fires by attempting to shift blame for Hama from his father to Mr. Tlass.

The planned sanctions would be in part designed to provoke dissent from within the military’s rank and file whose loyalty is being put to the test by the use of the military in the crackdown. Syrian bloggers report that family members of mid-level officers are urging their relatives to refuse to fire on unarmed civilians. It is these officers that the military’s top commanders would turn to should they conclude that the Assad regime has become a liability rather than an asset.

“The notion of targeted sanctions aimed at those who are responsible for perpetrating this violence can sharpen the choice for those people and can sharpen the choice for the regime… and make them understand that there are costs, specific costs, related to this action,” said Jack Sullivan, the head of the State Department’s policy planning section.

The question is whether the sanctions even if supported by the EU and other US allies will inflict sufficient pain to persuade those affected that a choice can no longer be avoided.

This article was first published as a Special to Al Arabiya