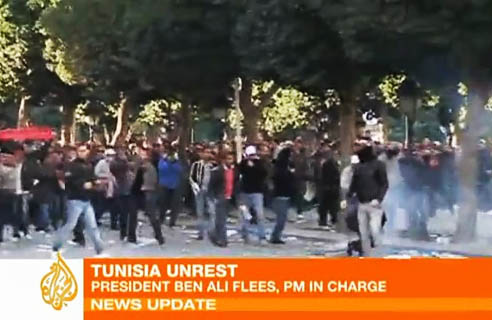 America was founded upon the principle of liberty and freedom, but guess who was covering the quest for freedom in Tunisia extensively yesterday? Al Jazeera, not the American news TV Networks.

I am utterly disgusted by how American TV channels have abandoned an important historic event of our time. Tunisian people took to the streets and toppled a Saddam-like totalitarian regime, but their voices and images from their revolution did not make it to the American viewers.

At work, I was able to follow Al Jazeera’s minute-by-minute coverage of the revolution through my iPhone. The Qatari network has an iPhone app that live broadcasts their news, in addition to its presence on Facebook, Twitter and Al Jazeera Blogs.

It was simply everywhere and for free!

Tech Crunch, a popular Web publication that offers technology news and analysis, summed it up in this article on how American news networks failed in covering the news. The article discussed how tweeps criticized American TV networks that were busy broadcasting news related to Marta Stewart’s dog and a guy who was arrested for drunk-driving a donkey in Texas on MSNBC, while CNN was busy interviewing the Jeopardy host about a robot contestant.

This is not journalism. What Al Jazeera did is!

And thanks to the social media websites such as Twitter and Facebook that brought the news to the American public, along with a few articles American newspapers published later in the afternoon yesterday.

Many know that Al Jazeera is unavailable in most American states, the thing that deprives millions of American viewers of watching breaking news with real, good reporting.

Making Al Jazeera, or at least BBC World (not the awful BBC America) available on air, cable or satellite will provide Americans with an alternate source to watch real news, not the heroic rescue attempt of a puppy who was stuck in a freezing river.

Shame on CNN, MSNBC and Fox News for intentionally ignoring a gripping event that will directly affect the United States’ foreign policy if such a revolution is spread across the whole Arab world.

30, Iraqi, from Baghdad. Currently in the US. Writer/Arabic Editor of IJNet (www.ijnet.org/ar) at the International Center for Journalists (ICFJ) www.icfj.org in Washington, DC.

7 Responses to Al Jazeera Delivers Lesson in Journalism to U.S.