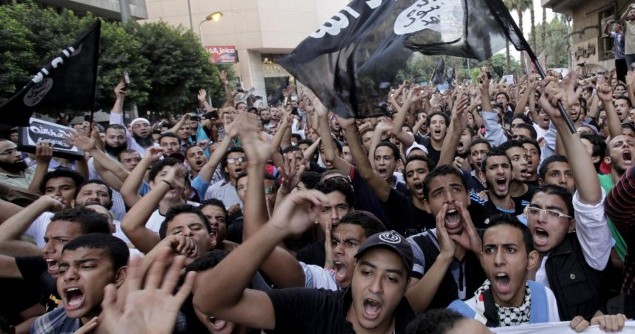 1. Tourism in Egypt and Tunisia, the economies of which heavily depend on it, is likely to take a nosedive this fall. It is a shame, because Tunisia had been hoping for a near return to 2010 levels of 7 million visitors this year. And Egypt’s tourism was up 16% over the previous year, though still down by 300,000 visitors a month from summer of 2010.

2. Likewise, foreign investment will be discouraged. Ironically, the embassy riots broke out while a delegation of 100 US business executives was in Cairo looking for investment opportunities. Some of those planning to stay beyond Tuesday are said to have abruptly left the country and canny observers spoke of the good will generated during the visit being squandered.

3. Decline of tourism and of foreign investment implies even higher unemployment in countries already plagued by lack of jobs.

4. In Egypt and Tunisia, the Muslim fundamentalist-dominated governments may well get blamed for failing to maintain public order. In opinion polling, security and fear of crime are major concerns on the part of ordinary Egyptians.

5. Both the Muslim Brotherhood and the al-Nahdah in Tunisia, fundamentalist parties that did well in the first post-revolution elections, face new parliamentary elections in the near future. If they are in bad odor with the public for failure to provide public order, and for implicitly helping the Salafi rioters, and for failure to improve the economy, they could be punished at the polls. It would be ironic if the impassioned reaction of fundamentalists to a phantom Islamophobic film so turned off the public as to lead to the Muslim religious parties being turned out of office in the next elections.

6. As a result of these considerations, the fundamentalists will blame outside agents provocateurs for the violence, and Israel for provoking it,trying to convince the public that Muslim fundamentalists had nothing to do with the issue.

7. The attack on the US consulate in Benghazi and the killing of Ambassador Chris Stevens and three others almost certainly spells an end to any American interest in intervening in Syria. The longevity of Bashar al-Assad’s secular Baathist regime, now attempting to crush rebels that include a small number of radical Muslim vigilantes, may have just been lengthened. Meanwhile, the Muslim world will be unembarrassed that they got so upset about a Youtube trailer but didn’t seem to care if hundreds of Syrians were killed, arrested and/or tortured every day.

8. The attack on the embassy in Sanaa, Yemen, by some 4,000 angry protesters, will likely draw the US even more into internal Yemeni disputes, since Washington will want to try to destroy the fundamentalist movements there. US drone strikes on radical Muslim movements of an al-Qaeda sort have become commonplace in Yemen. However, no one in the United States will know that Yemen ever existed or that the embassy was attacked, or that the US is pursuing a policy of drone strikes in that country.

9. Assuming there aren’t any diplomats taken hostage, President Barack Obama will look presidential in dealing with these deaths in Benghazi and his electoral chances may improve.

10. Mitt Romney will go on switching back and forth among his various opinions of the Islamophobic film and of President Obama’s reaction to the Libyan consulate attack.