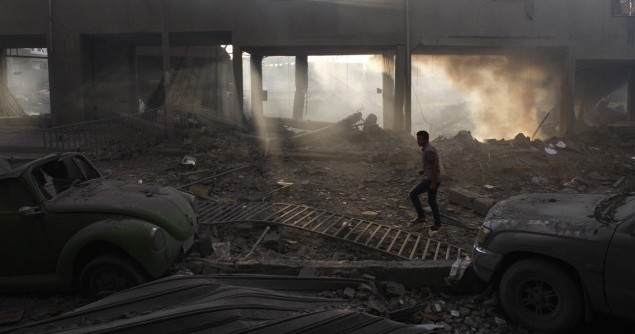 A series of Israeli measures against Palestinian soccer culminating in an attack on a stadium in Gaza during last month’s confrontation with Hamas, the Islamist Palestinian group that controls the heavily populated strip along the Mediterranean, has fueled growing international soccer opposition to the Jewish state’s policies.

In the latest expression of discomfort, 62 professional players have called for depriving Israel of the right to host European soccer body UEFA’s 2013 Under-21 championship. Israel has already employed the championship to counter the image of being an area dominated by war and conflict that was reinforced by last month’s hostilities with Hamas that killed more than 150 Palestinians and five Israelis.

“In June we have the Under-21 here in Israel. I hope that everything will be quiet until then and we can show the different sides of Israel,” said Maccabi Tel Aviv defender Omer Vered in a BBC interview.

The statement by the players follows protests earlier this year by world soccer body FIFA, UEFA and players’ group FIFPro against Israel’s handling of a hunger strike of an imprisoned Palestinian player, Mahmoud Sarsak, accused of being a member of militant group Islamic Jihad, and the arrest of two other players suspected in involvement in violent anti-Israeli actions.

“We are informed that on 10 November 2012 the Israeli army bombed a sports stadium in Gaza, resulting in the death of four young people playing football, Mohamed Harara and Ahmed Harara, 16 and 17 years old; Matar Rahman and Ahmed Al Dirdissawi, 18 years old. We are also informed that since February 2012 two footballers with the club Al Amari, Omar Rowis, 23, and Mohammed Nemer, 22, have been detained in Israel without charge or trial.

“It is unacceptable that children are killed while they play football. Israel hosting the 2013 UEFA Under-21 European Championship, in these circumstances, will be seen as a reward for actions that are contrary to sporting values,” the 62 players of predominantly Arab and African origin, some of whom rank among the world’s most prominent, said in their statement. Signatories of the statement that ran on the website of player Frederic Kanoute included Didier Drogba and Eden Hazard.

Israel has asserted that the Palestine Stadium, which it also attacked in 2006, was being used as a missile Launchpad and rocket storage place. Like in 2006, FIFA said it would fund repairs.

Asked if he had sympathy with the Palestinians in Gaza in the wake of the stadium bombing, Mr. Vered said: “I’ll tell you the truth, I also want peace. I don’t like to hear when innocent people are dying during violence. But, you know, after the bombing of the stadium of Gaza they issues a footage that was clearly that there was clearly keeping of missiles under the field and it was also where they shoot the rockets into Israel. So, I think Israel has the right to defend itself.”

The players’ statement is the second time that there is pressure on UEFA to take the hosting of the U-21 championship away from Israel, which plays in European competition after it was Middle Eastern soccer associations forced the Jewish state out of the Asian Football Confederation in the 1990s.

Palestinian Football Association head General Jibril Rajoub called in a letter on June 12 to UEFA president Michel Platini for stripping Israel of the right to host the championship. The effort to achieve a solution for Mr. Sarsak involved various segments of the international soccer community.

In a June 12 letter to Israel Football Association (IFA) president Avi Luzon, FIFA president Sepp Blatter expressed concern that Mr. Sarsak and the two other Palestinian players, Olympic soccer team goalkeeper Omar Abu Rwayyes and Ahmad Khalil Ali Abu El-Asal, who plays for the Aqabat Jaber Palestinian refugee camp soccer team, were being “illegally” detained “in apparent violation of their integrity and human rights and without the apparent right of due process (trial).”

Mr. Blatter called on the IFA “to act with the utmost urgency” given “the graveness of the … situation” to “draw the attention of the competent Israeli authorities to the present matter with the aim of ensuring the physical integrity of the concerned players as well as their right for due process.”

This week’s players’ statement dashed Israeli hopes that the pressure exerted by FIFA, UEFA and FIFpro in the Sarsak case would prove to be an isolated incident. “It is important that elected football officials be true to the issues that affect the game. No doubt, the Sarsak case is only one such issue and most likely there are others not only in our part of the world,” said one soccer official at the time.

FIFpro asserted in its statement at the time that that players in Palestine often do not have full freedom of movement. “The freedom of movement is a fundamental right of every citizen. It is also written down in the FIFA Regulations that players must be allowed to play for the national team of their country. But actually for some footballers it is impossible to defend the colours of their country. They cannot cross the border. They cannot visit their family. They are locked up. This is an injustice,” the statement quoted says Philippe Piat, FIFPro’s vice-president and president of FIFPro Division Europe, as saying.

To be fair, the IFA, the only Middle Eastern soccer association to have launched an anti-racism campaign, has sought to work with its Palestinian counterpart in reducing the obstacles Palestinian soccer encounters as a result of Israeli security measures. The two associations discovered, however, that their influence was limited when deal with security issues beyond the realm of their responsibilities.

Ironically, one of the sanest voices calling for constructive engagement rather than polarizing hostility is that of a Kuwaiti-born, American-raised Palestine national team player. Asked in a BBC whether his perspective differed from his fellow team members given his background, Omar Jarun said:

“They have a lot of hatred towards a lot of Jewish people and a lot of Jewish people have hatred towards a lot of Muslim people. Once again, it comes to not being educated around the issue of there has got to be a solution and not go right away beserk and start with violence. You need to talk out some situations, they don’t do that. But me being in America where there are tons of races, I’ve had tons of Jewish friends, there’s a Jewish guy on the team. I get along with everybody cause, that’s kinda of who I am and I realize that violence isn’t the answer for anything,” Mr. Jarun said.

Asked whether he would want Palestine to play Israel, Mr. Jarun answered: “I hope so, I always bring that up with the guys. Is say: why don’t we play againt Israel. They kind of laugh about it, but I think it should be a game, I don’t know, I would hope it would be a normal match, it would be tense but its gotta happen. It needs to break down the barrier between us. We need to play against each other, we need to be more communicating with each other. We can’t just have this hate from both sides, Its unbelievable. I want to break that down and I don’t know what else to do. We play a match and then we go from there,” Mr. Jarun said.

One Response to Top International Footballers Call for Action Against Israel