Too Late to Save Egypt’s Revolution? 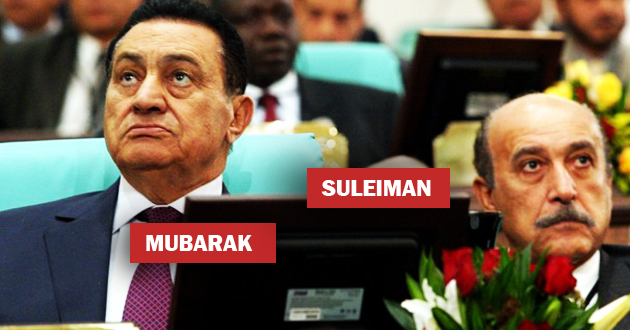 Judging by the People’s Assembly’s decision to amendment political participation Law 73 of 1956, it’s not. But there’s a catch. The PA can decide all it wants, but unless the ruling Supreme Council of the Armed Forces signs off on the decision, no such amendment will ever see the light of day.

Former Intelligence Chief Omar Suleiman’s eleventh hour presidential bid announced days after the Muslim Brotherhood’s decision to field its lead financier and strategist Khairat Al-Shater has invigorated the race for the top job with endless theories about what is really going on behind the scenes.

Did the MB know Suleiman was going to run which is why they put forth Al-Shater and the Freedom and Justice Party’s Mohamed Morsi as a back-up to confront their worst nemesis? Is Suleiman SCAF’s choice? Was all this planned by SCAF from day one?

The plan: Cultivate enough fear and panic from the Islamists to justify the return of Mubarak’s strongman, his cold-blooded head of general intelligence described by the New Yorker in a January 29, 2011 article as the “C.I.A.’s point man in Egypt for renditions — the covert program in which the C.I.A. snatched terror suspects from around the world and returned them to Egypt and elsewhere for interrogation, often under brutal circumstances”.

Suleiman was and continues to be the ousted Mubarak’s most loyal subject.

That’s a fact, not an opinion. Having covered the proceedings of Mubarak’s trial and followed closely the arguments of his defense team in the case of complicity in killing protesters during the early days of the January 2011 uprising, I can confidently claim that his lawyer (and those of other defendants in the same case) consistently referred to the testimony of Suleiman to absolve Mubarak of any criminal or political responsibility for the killing of 225 of the 846 victims who were targeted in public squares.

At the January 17 hearing, lawyer Farid El-Deeb argued that criminal intent was absent in the case. He cited the testimony of Suleiman who told the court last September in a closed session that neither Mubarak nor his then interior minister El-Adly gave orders to use violence in dispersing protests.

He also cited Suleiman’s testimony about the involvement of foreign “infiltrators” in the deaths and his theory that the killings might have been the result of individual decisions made on the ground, or failure to obey orders.

But that was not the first time Suleiman had made similar statements. Merely hours after the deadly attack on Tahrir protesters on Feb. 2 during what came to be known as the Battle of the Camel, then-vice president Suleiman gave his first ever interview to Western media with ABC journalist Christiane Amanpour. In it he was kind enough to admit that the millions marching against Mubarak and his regime were Egyptians, but that “for sure they are supported by foreigners”. He even described the pro-Mubarak supporters on horse and camel-back who attacked Tahrir as having behaved “very well”. Asked whether he would run in any coming presidential election, Suleiman said that he was an “old man” and had no intention of doing so.

On the subject of the Camel Battle and Omar Suleiman, a couple of days ago on Yosri Foda’s late night talk show on ONTV, FJP MP Mohamed Beltagi recounted an incident that began before the attack, which proves that the general intelligence still headed by Suleiman at that point, were not innocent bystanders, but in fact were probably criminally involved in orchestrating that attack which left 12 killed.

Beltagi recalled how an intelligence officer spent over five hours at one of the MB’s coordination offices warning him that Mubarak’s supporters were on their way and that in order to avoid further bloodshed, Beltagi should convince the hundreds of thousands of protesters to go home, once more betraying the regime’s obsession with the lie it was perpetrating that the Islamist group was behind the uprising. Only minutes before the attack, the officer disappeared.

Suleiman is the same man who is now claiming that he will achieve the demands of the revolution, a revolution that he never acknowledged for a single day but was in fact diligently working behind the scenes to abort. It is no surprise that leaked “intelligence reports” accused April 6 Youth Movement members of being foreign agents and in the run-up to the pre-January 25 anniversary were a central part of a disinformation campaign against “radicals” who will bring in the foreign colonizers.

This is also the man who is now making completely unsubstantiated claims that the Muslim Brotherhood have sent him death threats in a move to further inflame an already explosive situation and pass himself off once again as the bulwark against the onslaught of the turbaned Islamic fundamentalists from which the Mubarak regime had been “protecting” us for 30 years.

We have come full circle. The regime’s narrative is pitted against an Islamist opposition but distressingly, some so-called liberals who claim to be supporting a civil state have swallowed the juice, adopting whole-heartedly the anti-Islamist propaganda and denouncing amendments to the political participation law that would ban Suleiman from running for president.

How can they not see that the very fact that Suleiman is allowed to run instead of facing criminal charges is a victory for the counter-revolution and is tantamount to the return of Mubarak himself? As one MP pointed out Thursday, how can it be fair for the man who holds the security files of all his contenders to compete against them on an equal footing?

While the Brotherhood have made some unforgivable mistakes throughout the past 13 months, condoning the political disenfranchisement of Suleiman goes beyond one’s agreement or disagreement with them. The grade school boycott of Friday’s Brotherhood-led protest in support of the amended legislation by some liberal forces is dangerous and ultimately counter-productive, playing into the hands of those who have been striving relentlessly to turn the clock back to Mubarak’s Egypt.

It is time to evoke the spirit of those 18 days when political affiliation and religious ideology took a backseat for the sake of the greater public good. The stakes today with Omar Suleiman perhaps within days of succeeding Mubarak, are just as high as they were on January 25, 2011.

This is the time for transitional justice. Otherwise it’ll be too late.

One Response to Too Late to Save Egypt’s Revolution?