Time to Say, ‘Goodbye’: Mubarak is the Problem 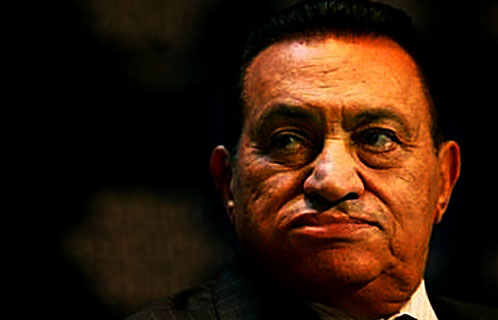 It’s not the Andrea Bocelli/Sarah Brightman song now. This time, it’s Egyptian President Hosni Mubarak. After close to 30 years in power, he appears no longer capable of providing a solution to Egypt’s turmoil. Rather, he is now the problem.

Saudi papers carry agency reports on the violence now wracking Egypt’s capital. They note that the Egyptian military is standing aside—or not getting involved—as pro- and anti-Mubarak groups battle with stones and firebombs. It appears that the situation is critical enough that the ‘Ashreen Guinea’ goons—those typically paid 20 Egyptian Pounds (and a Viagra tablet) by government cronies—are now pulling down 100 Pounds for their organized harassment (no word if more tablets are involved). Enlisting the horse and camel ride purveyors from the Giza Pyramids was, to me, the height of bogosity in trying to demonstrate ‘popular support’ for the government. I’m sure those who live on income from tourism are hit hard by the chaos. I’m also confident that they didn’t take it into their heads to become counter-revolutionaries at the spur of the moment.

What still interests me is what is not being reported: What’s going on outside Cairo and the Delta? Is it quiet? Is there turmoil? If there is turmoil, who’s acting and to what effect? International media seem to have no reporters at all in Middle or Upper Egypt, though nearly half of the country’s population live there.

I think, too, that it might be time for King Abdullah to return to Saudi Arabia from his recuperation in Morocco and invite Mubarak to live in the Kingdom.

Asharq Alawsat is a bit more forward in its reporting. Its headlines make it clear where the paper is assigning culpability:

The paper also runs several interesting pieces on the meaning of the revolt in Egypt. In one, the paper’s Deputy Editor-in-Chief, Ali Ibrahim, discusses the economic costs of revolution, both short- and long term. In another, Tariq Alhomayed, Editor-in-Chief calls for the creation of an Egyptian Youth Party to organize and channel the energies youths are bringing to the streets and Internet. It is their future, after all, yet they have no opportunity to play a role in Egyptian politics.

There’s a fascinating interview by Adel Al-Toraifi, Editor-in-Chief of ‘Majalla’ magazine with Syrian President Bashar Al-Assad, in which the latter discusses Egypt and revolution. Al-Asad makes some encouraging remarks about reform, but his analysis of how revolutions start seems seriously faulty. He appears to believe that Syria is not in revolt because the Syrian people have a ’cause’ in Ba’ath Party ideology that keeps them working away. Al-Toraifi begs to differ and so do I.

As Al-Toraifi states, ’causes’ are hardly enough when it comes to aspiring to political rights and freedoms. He’s too polite to point it out, but Syria is a repressive police state. Dissent is quashed immediately and the government has multiply shown that it is willing to kill to preserve itself. The age of ‘cross-border ideology’ (e.g., pan-Arabism) is gone, Al-Toraifi says, and again, he’s exactly right. The issues driving foment in the Arab world today are not international ones—though some have been internationalized for better or worse. They are the issues that affect individual men and women: jobs, security, a decent wage and home, education for their children, a future for their children. Pan-Arabism has nothing whatsoever to say about these issues other than to claim ‘We’re working on them and yes, they’re important.’ Mr Al-Assad might wish to pay attention to what’s happening at his doorstep. Al-Jazeera reports on a movement calling for a ‘Day of Anger’ across Syria this weekend.

It doesn’t take a conspiracy or ‘infiltrators’ to trigger the events we’re seeing now. Asharq Alawsat also runs a piece on the trigger that set off the Tunisian revolution, the reported slapping of an illegal merchant’s face by a policewoman, his complaint’s being ignored by government authorities, and his finally setting himself on fire. The article is worth reading to see how a seemingly little event can lead to gigantic conclusions. It should be taken as a lesson by Middle Eastern rulers: All it takes is some puffed-up bureaucrat exceeding his or her bounds and humiliating a citizen.

Controversy over “the slap” that brought down a government