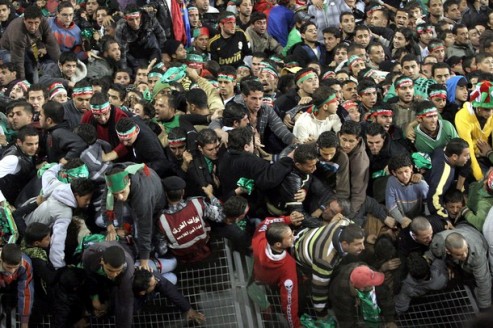 As most people reading this already know, an incident took place in a recent football match between the Wehdat and Faisali clubs, where the fans of the former were seriously injured due to the intervention of Gendarmerie Forces who clashed with the fans.

From the various accounts I’ve read and gathered in the past day or so, including from people who were actually there – the Faisali fans were let out of the stadium first, which is normal procedure for the losing team, in order to avoid clashes between the two groups of fans.

People from outside the stadium began to throw stones and bottles into the arena, creating chaos inside, where disgruntled fans exchanged words causing the Gendarmerie to move in to maintain calm. This, somehow, resulted in fans getting beaten. Worse, an iron fence that separated the fans from the field collapsed and trapped people as a stampede ensued, resulting in the high number of casualties (said to be over 150), including children.

Suffice to say, what happened was very unfortunate and saddening.

Of the hundreds of matches that have taken place between these two teams, this is probably the first time (to my recollection) that something of this magnitude has happened.

To what extent this representation is 100% accurate is uncertain, but it is the general perception and belief held by most Jordanians. Moreover, hooliganism is rife amongst the fans of both clubs, and more often than not, matches end with cars being destroyed, mild clashes between fans, things being thrown, and people landing themselves in jail for the night.

That said, it is utterly difficult to say almost anything about this subject without being faced with a label. That’s just the risk one takes.

Faisali and Wehdat football games are not mere football games but rather an arena where elements of honor, national identity, origin and roots all seep in. And it is as divisive as one can imagine when it comes to these elements; you are either a fan of one team or the other.

In other words, you are either pro-Jordanian or pro-Palestinian; to be a member of one camp is to proclaim yourself the antagonist of the other.

While this may appear downright silly in the context of greater threats (and I assure you, it most certainly is), it’s nevertheless the prevailing perception. And with that in mind, it’s incredibly difficult to offer any type of balanced commentary without being labeled as either this or that; a “with us” or “against us” mentality.

It is an issue where your family name, origin and allegiances are all called in to question, which is just what the issue of Jordanian national identity needs these days. It is for these reasons that an incident like this steers the local conversation immediately into a question of origin. There is no one on the street who is not talking about this in the context of Jordanian-Palestinian identity.

Naturally, this story has me fluttered with various thoughts; and this is what I have to offer on this subject:

First, this was a football match, where, much like a protest, events are never as black and white, tasteless and oversimplified as some would have us believe. One Washington Post article seemed to boil down the equation to: Jordanian police attacked Palestinian fans; Jordanians bad, Palestinians good. This equation is perhaps reiterated to some extent locally by absurd opportunists, who, in typical fashion, will attempt to take over this issue for their own personal benefit.

But those of us with a shred of intellect know better.

We know the devil lingers in the details and even if one was physically there at the event, their eyewitness account isn’t necessarily dependable, especially when it comes to these types of incidences where chaos rules the scene. And I have a tougher time than most in casting immediate judgment and responsibility on any specific group as it is never that black and white. Those of us living in Jordan know this.

To live in Jordan is to live in the assorted shades of grayness, everyday.

We blame everyone we can think of, and still, there is no resolution.

I think at times like these I am easily tempted to become angry, just like everyone else. But only because rage is so easy. So simple. So, uncomplicated.

And then I remember that while anger makes one feel better for a day or two, it does nothing to resolve the bigger picture.

Some of the officers involved will probably be investigated and even held accountable for their actions in a bid to restore some public calm. And that will make one feel better for a week, it might even kill the news cycle. But again, it does nothing to resolve the bigger picture.

If there was ever a time for the taboo chains to crumble, the chains that have long ensnared any attempts to host a national dialog over the issue of identity – this would be it.

This is an issue that has been dying to see some sunlight, some attempt on a national level for a conversation to evolve, for resolution to grow in the place of divisiveness.

The state needs to recognize this; our leadership needs to understand this. This issue will not go away. Not even with the establishment of a Palestinian state. This issue will continue to fester beneath the surface of social discontent in Jordan.

This issue, this unspoken conversation is a growing wave in the ocean that is capable of nothing but sheer destruction. It born and bred for the single purpose. And at the end of the day, it is on the state to take action and it is on our leadership to lead. Not with speeches. Not with slogans and national campaigns. Not with Parliamentary committees. Not with empty gestures. Not with appeasement. But with genuine and honest acknowledgment, and a conversation. The acknowledgment that this issue is as pertinent to our social cohesion, to our very survival, as the issue of water is.

As a people, we need to find ways of putting aside the rage and the blame. History has shown us time and again that little good has ever come from either. We need to find compassion, we need to search for resolution. We need to evolve past the cliches of traditional stereotypes and perceptions. We need to write a new history. A new book. We need to pass on a new legacy; a new inheritance. We need to do this now more than ever.

We need to have a conversation.