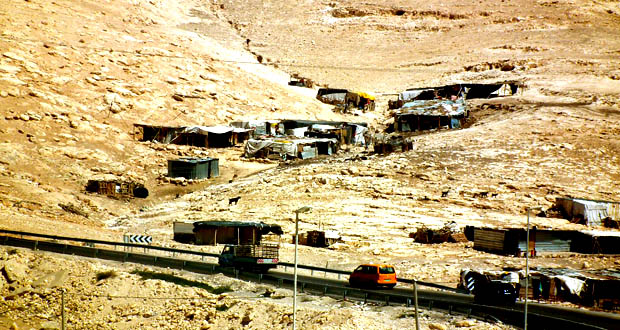 In 2004, Israeli officials were up in arms about an impending Bedouin Intifada. But the Bedouin didn’t rebel and now, despite plans to expel tens of thousands of Bedouin from their homes in the West Bank and the Negev, things remain relatively quiet. Why?

As Israel steps up its expansionist policies both inside and outside the Green Line, the Bedouin community has come under particularly intense pressure.

Inside of Israel, the state seeks to Judaize the Negev (Naqab) desert. This “development” includes last year’s Prawer plan which recommends that Israel relocate some 30,000-40,000 Bedouin citizens, ripping them from their villages and sticking them in impoverished townships, to clear the area for Jewish-only settlements.

After the Israeli cabinet passed the Prawer plan in September 2011, Adalah Legal Center for Arab Minority Rights in Israel likened it to “a declaration of war.”

Al Arakib could be considered an opening battle. The state first demolished the unrecognized village in July 2010—destroying homes and tearing olive trees from the ground to make way for a forest to be planted by the Keren Kayemeth LeIsrael-Jewish National Fund (KKL-JNF). After the Bedouin residents of Al Arakib rebuilt their village, Israeli forces returned and destroyed it again. Since then, Al Arakib has been demolished and rebuilt over 30 times.

Israel’s policies are just as inhumane on the other side of the Green Line, where the so-called “Civil Administration” seeks to remove 27,000 Bedouin from Area C in order to expand illegal Israeli settlements. The Civil Administration’s plans will be carried out over the next three to six years.

The United Nations reports that Israeli forces demolished 44 Palestinian-owned buildings in East Jerusalem and the West Bank last month, including 14 houses. 66 people were displaced, 40 of whom were Bedouin.

So where is the Bedouin Intifada?

In 2004, the Israeli daily Haaretz called a Bedouin uprising “practically inevitable.” Lurching from one alarmist quote to the next, the article labeled the Bedouin a “ticking bomb,” a “keg of dynamite,” depicting them not as native inhabitants but as criminals who have taken over the Negev.

Amidst the hysteria came a fetishizing remark from Reuven Gal, then-Deputy National Security Advisor for Domestic Policy, who commented that, to the Bedouin, “honor is more precious than money.”

The writer concluded, ominously, “every plan to develop the Negev is likely to face violent opposition because of the Bedouin who live in the area.”

The article drips with racism and colonialism—Israeli plans to displace the Bedouin constitute “development.” Not only are the Bedouin sure to oppose such “progress,” they are likely to be “violent.” And then there are the Orientalist depictions of the Bedouin as reactionary, volatile beings unable to control their impulses, especially when “honor” is at stake.

But it would be wrong to blame the writer and his interviewees alone.

In his book Good Arabs, Hillel Cohen describes an incident that took place in 1950, when the Israeli army’s chief of staff visited a Bedouin tribe, reporter in tow. The journalist recounted a “royal meal,” eaten against the backdrop of “the echoes of gunshots” and “riders’ galloping.” The evening climaxed with a ceremonial “presentation of the sword of the desert.”

Cohen explains that the reporter’s depiction “fit well with that period’s common portrayal of the Bedouin as hospitable noble savages….” An Orientalist view of the Bedouin is deeply rooted and, as the 2004 Haaretz article suggests, persists. So feverish proclamations about a Bedouin Intifada should be taken with a camel-sized grain of salt.

We should also consider the motives behind such “warnings.” As, Jaber Abu Kaf, a representative of the Regional Council for Unrecognized Bedouin Villages told Haaretz in 2004, claims of an imminent Bedouin Intifada “are baseless and are intended to promote a political agenda.”

But, for argument’s sake, let’s say that the Bedouin would like to revolt, violently, against Israel’s discrimination.

Let’s set aside the quiet acts of resistance, the small, silent intifada, already taking place: rebuilding demolished homes; the day-long general strike held in December of 2011; the massive protest outside the Prime Minister’s office on the same December day.

And let’s set aside individual agency and pretend the Bedouin can only react, collectively, to Israeli policies.

So why hasn’t that “ticking bomb” exploded?

The answer lies, in part, in the state’s founding. Before Israel was established in 1948, some 91,000 Bedouin lived in the Negev. After the war, only twelve percent of the original population remained. Many of the Bedouin facing forced transfer from the West Bank today are refugees whose families fled or were driven from the Negev during the nakba.

Shattered and scattered, the Bedouin were subject to additional Israeli efforts to divide and rule. A number of those who had managed to hang on to their land in the Negev were pushed off of it. In some cases, the state appointed local mukhtars, pitting families against one another, and putting weak leaders, or those who would serve Israeli interests, at the head of villages.

Israeli authorities also sowed seeds of disunity by actively encouraging–and rewarding–collaboration. That some took the bait undermines the Orientalist assertion that the Bedouin value honor more than money.

Israel has also fomented poverty in the Bedouin community. In the 1970s, the state built seven townships for the Negev Bedouin that are home today to approximately 80,000 Bedouin. These ghettos have the country’s highest unemployment and school dropout rates as well as the social problems that accompany poverty and hopelessness, including rampant drug abuse.

Those that remained in the desert have not had it much easier. Despite the fact that many Bedouin live in villages that predate the state itself, Israel does not recognize most of these communities. Some 80,000 Bedouin live in the unrecognized villages that lack infrastructure and high schools. Rawia Aburabia, an attorney with the Association for Civil Rights in Israel (ACRI), calls the status of Bedouin education, “catastrophic,” pointing out to a drop out rate that tops 40 percent.

There is also the contentious issue of military service. Some Bedouin tribes serve in the Israeli army; many do not. This creates tension within the community and serves as yet another obstacle to the unity needed for a successful uprising.

With Palestine’s Bedouin divided between Israel and the surrounding countries; split between those who serve in the Israeli army and those who don’t; struggling to survive; lacking leadership and a cohesive national strategy, an organized and sustainable uprising is unlikely. The international community, then, has a responsibility to stop the home demolitions and forced transfers that Palestinians and Bedouin face in the West Bank and inside Israel.

Advocating for outside intervention runs the risk of sounding patronizing, at best, colonial, at worst. That’s the beauty of the boycott, divestment, and sanctions (BDS) movement. The call for BDS comes from Palestinian civil society and is self-empowering.

This article was originally published on February 9, 2012 for the Alternative Information Center.