The Ten ‘To Dos’ That Will Guarantee Gaza Ceasefire 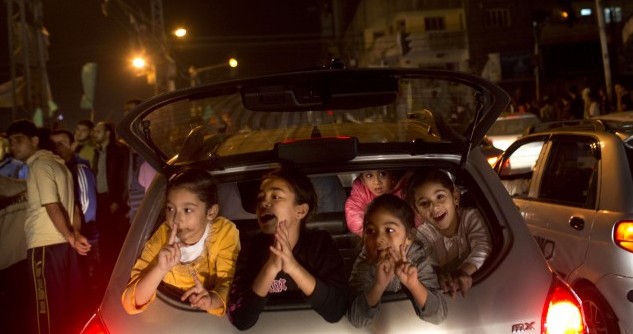 1. The Israeli blockade on Gaza exports and non-military imports must be lifted altogether. Ben White points out that the restrictions on goods brought into Gaza via Israel are still very substantial, despite Israeli assertions that the blockade has been eased.

And, the blockade on exports is almost complete, with some minor exceptions, and is devastating to the Gaza economy. Real per capita income among Palestinians in the Gaza Strip is less today than in the early 1990s!

These Israeli policies are a form of collective punishment imposed by an Occupying power on a noncombatant occupied population. Israel also imposes restrictions on Palestinian travel outside the Strip (even, sometimes, unconscionable delays for patients seeking specialist medical care– delays that lead to their deaths). Collective punishment, obstacles to free movement as part of an Apartheid regime, and occasional Israeli attacks that show blatant disregard for civilian life are not only illegal in international law but constitute a set of systematic war crimes that rise to the level of crimes against humanity as defined by the Rome Statutes.

While it is unfortunate that small homemade rockets are sometimes fired by small militant groups from Gaza into Israel, it is impossible to expect social peace from a people being economically strangled.

2. Palestinians must be granted citizenship in a state. It is all the same to me if it is a Palestinian state or if they are given Israeli citizenship. The aggressive, far-right Likud Party is setting things up so that there isn’t really a place to put a Palestinian state anymore. In any case, it is unacceptable for millions of Palestinians to be kept stateless by Israel. Stateless people have no real rights, since rights are enforced by a state. Gaza is lawless because it lacks a state, and Mr. Netanyahu won’t let one be formed. Among the rights that stateless people lack is the right to security of property. Palestinian property is being daily stolen from Palestinians by Israelis, who use Israeli law, administration and the courts to deprive stateless Palestinians of their rights. Mr. Netanyahu played a central and self-admitted role in reneging on the promises made by Israel to the Palestinians as part of the Oslo Peace Process and Madrid conference, and the reason he could do so with impunity is that Palestinians are stateless. Treaty obligations to them don’t have to be honored.

There are probably only about 12 million stateless people in the world. Many are individuals who get caught between countries (as with women who lose citizenship for marrying a foreigner and emigrating with him, but who are not eligible for citizenship in their new country either). Palestinians are the largest single group of the stateless, probably amounting to some 5 million. An additional 3.6 million Palestinians in Jordan have Jordanian citizenship for the moment, but it is apparently not necessarily permanent. Some 40,000 Palestinians from Gaza who had attained Jordanian citizenship have had it withdrawn again.

Statelessness was common in the 1930s in Europe. Franco made millions of Spanish leftists stateless. The Nazis withdrew German citizenship from the Jews. The Communists declared the White Russians stateless. Gypsies were often stateless.

I’m sure most Jews would not wish to be responsible for Palestinians being kept stateless in the way that the fascist German state rendered Jews stateless in the ’30s. It seems certain that stripping citizenship from Jews and Gypsies was what allowed the Nazi state to genocide them. The stateless, having no rights, can be ethnically cleansed or killed with relative ease.

3. Egypt should broker a rapprochement between the Palestine Liberation Organization and Hamas. As long as these two are at daggers drawn, Palestinians are easily divided and ruled by Israel and the US, and they have fewer means to resist having their land stolen and having their lives blighted by the blockade.

4. Egypt’s President Muhammad Morsi should put pressure on Hamas leaders to foreswear the use of terrorist tactics toward Israel. The US federal code defines terrorism as the deployment of violence by a non-state actor against civilians for political purposes. Deliberately killing innocent non-combatants is a war crime and always carries the taint of illegitimacy, and if Hamas wants to amount to anything politically it must take this step. Hamas’s and Islamic Jihad’s use of terror has deeply damaged the Israeli left and virtually killed off the Israeli peace movement– the people most likely to come to an understanding with the Palestinians.

5. New elections for the Palestine Authority should be scheduled, perhaps overseen jointly by Israel and Egypt. The winner, even if it is Hamas, must be recognized as the legitimate government of the PA.

6. Israel must return to a moratorium on its colonization of the Palestinian West Bank, so as to permit genuine peace talks to start back up. Settlements are the number one obstacle to Israeli-Palestinian peace. Palestinians cannot be expected to negotiate over how much of the pie they get if the Israelis are digging into the pie and eating most of it while the negotiations are proceeding.

7. Israel must cease expropriating the property of Palestinians in East Jerusalem and must recognize that the status of Jerusalem is a matter for final status negotiations. Likely, in any successful negotiations, part of Jerusalem will be the capital of Palestine. There is no reason in principle that the city cannot be shared. Chandigarh in India is capital of both Punjab and Haryana states, which are rather more populous than Israel/Palestine.

8. Israel must cease demanding that people recognize it before negotiations begin. There is something pitiful about being that insecure, or too clever by half in being that Machiavellian. For Palestinians, some forms of ‘recognition’ involve giving up basic claims and rights that they believe should be part of the negotiations. The Israelis are trying to set things up so that the Palestinians have to give away most of what they want to negotiate about before they even get to the table. The PLO recognized Israel as part of the Oslo accords. It was rewarded by being marginalized, emasculated and betrayed. Why should any other Palestinian political force wish to be taken for a ride that way? As for Israeli complaints that Hamas wants to destroy them, that is ridiculous. It is not ridiculous that Hamas might have such aspirations in the long term, it is ridiculous that a tiny poverty-stricken and militarily virtually non-existent entity like Hamas should be taken seriously as a military threat to nuclear-armed Israel.

9. Israel and the Palestinians, in the light of Hamas pledges of renouncing terror tactics and Israel’s moratorium on land theft, must return to the negotiating table for final status talks and the swift implementation of Oslo.

10. The United States should cease blocking United Nations Security Council resolutions critical of Israel. If the Israelis continue their illegal blockade of Gaza and their massive land theft from the Palestinians of the West Bank, the UNSC should place economic sanctions on Israel. The US moves to paralyze the UNSC on the Palestine issue are the height of hypocrisy, similar to the diplomatic cover it gives the government of Bahrain. Note that among the most severe sanctions in history are being applied to Iran, for doing things that Israel has also done. American hypocrisy on Palestine has long detracted from the moral authority of the US and the UN in the Middle East, and weakens American diplomacy and soft power, to the detriment of US interests.

I’m not stupid or naive. I know that almost none of these 10 points is likely to be realized. All I’m saying is that these steps are would would be necessary for the achievement of peace. They won’t be taken, and therefore intermittent wars, bombings, attacks, and the blighting of human lives will continue. The US will likely at some point suffer further for these failures, just as it did on 9/11, which was launched in part to punish Washington for its treatment of the Palestinians. Given how many of our liberties we lost with 9/11, you worry that another such large-scale attack will finish off the constitution altogether.

That point is why George W. Bush and Barack Obama have not really served US interests well in the Middle East, since neither Iraq nor Afghanistan is at the center of the region’s geopolitics. Both have kicked the can down the road, just as Mitt Romney admitted he would do. We know that US politicians behave in this way because the Israel lobbies, including those of the Christian Zionists, are a successful single-issue interest group. But in attempting to ensure that the Israeli right wing is never impeded in its ambitions, they are dooming Israel. Eventually the region will just become too hot and nervous-making for most Israelis, and more will begin leaving every year than coming in. Over time they will be diminished, as the once-dominant Christians of Lebanon have been, through out-migration. Unfortunately, this scenario will unfold over decades, and will cause us all a lot of headaches on the way