This Silence on Zionism is ‘Deafening and Damaging’ 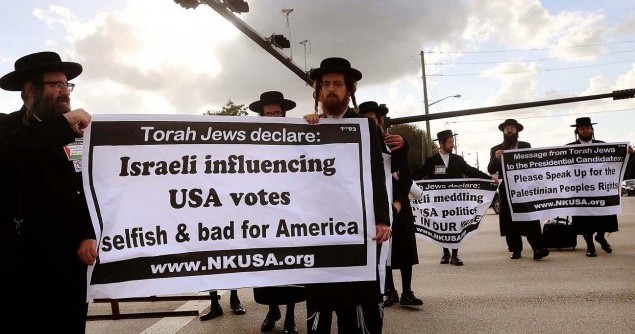 Last week, New York Times public editor Margaret Sullivan characterized me as “the anti-Zionist Jewish-American journalist who writes about the Middle East.” That’s my reputation; I can’t take exception to her words. But when Sullivan quoted Jeffrey Goldberg, she did not say he was Jewish or a Zionist–or that he had once emigrated to Israel because he believed that America was unsafe for Jews, and served as an officer in Israel’s army before coming back here and recommending Israel’s militant policy toward Arabs to America.

Sullivan’s double standard is indefensible, but it is typical of a standard of censorship in our journalism. American media are not talking to their readers about Zionism. They are not even attempting to describe the ideology that is at the heart of the problem in Israel and Palestine. The media are honest with their audiences about other movements of a religious character, from evangelism to opposition to stem-cell research to radical Islam. So they should be honest with them about Zionism.

Zionism is a 115-year-old movement inside Jewish life that says there is a need for a Jewish state in Palestine because Jews are unsafe in the west and Jews have a biblical connection to Palestine. Some people say that this is too complicated a concept to explain to Americans. (Norman Finkelstein joked that Zionism might as well be a hairspray and it’s irrelevant to the discussion at the New School in October). I don’t think so. Beliefs are very important; and Americans have a right to know why so many American Jews believe in the need for Israel at a time when this concept is warping our foreign policy.

It’s not enough for a reporter to say that someone is pro-Israel. Zionism draws on a person’s worldview and has a religious character, it supplies meaning to his or her life. It is often a core understanding that drives that person’s positions in other areas (see Neoconservatism). And it is deeply enmeshed in the official Jewish community.

I believe the media have refused to explore the Zionist issue because it would involve a lot of squeamish self-interrogation on the part of Jews. Imagine Ted Koppel having a panel where Wolf Blitzer, Robert Siegel, David Gregory, Andrea Mitchell, Richard Engel and Ed Rendell would have to explain what Zionism means to them. The acknowledgment of Jewish prominence in the Establishment, and of the power of Zionism, would make a lot of Jews uncomfortable, so the conversation is verboten.

But so long as these beliefs are not examined, and Israel and its supporters continue to play such a large role in our policymaking, the silence is bad for Jews. It allows people who are justifiably angry over our foreign policy to believe that all Jews support Israel, or suspect that we disguise our dual loyalty with misleading prescriptions about American security. It allows Zionists to seek cover for our country’s blind support for Israel by stating that there is no difference between anti-Semitism and anti-Zionism– when there is absolutely a difference. See Jewish Voice for Peace. See Hannah Arendt. See Judith Butler.

I think all Jews should be openly debating these matters; but they won’t till the belief question is raised by the mainstream media. There are signs that the ice is melting. Last week Andrew Sullivan, an influence leader if anyone is, published a mini-essay (attacking the liberal Zionist Spencer Ackerman‘s dream of a laser war) in which he stated that Zionism is another hurtful 20th century “ism” that has run its course, and modern political reality is inconsistent with the goal of a Jewish-majority state. Ethan Bronner (a reputed liberal Zionist who seems to understand that Zionism has lost its way) boldly gave Rami Khouri space on the front page of the New York Times during the Gaza assault to attack Zionism. On NPR Jim Fallows said bravely that there has always been a tension between Israel’s creation as a Jewish state and a democracy; you really can’t be both, he was suggesting.

As Fallows and Sullivan seem to know (and Matt Yglesias and David Remnick will surely come to profess some day, and Jonathan Cook knew years ago, and the late Ibrahim Abu-Lughod knew when he was a teenager in Jaffa) the contradiction between democracy and Jewish nationalism has been inherent in the Zionist project from the start, but has always been described as a tension rather than a contradiction so as to make Zionists and their friends feel better about their undertaking. The Nakba of 1948 continues today with the ethnic cleansing of Area C on the West Bank and the pulverizing of Gaza. But liberal Zionists have given themselves permission to dither about the destruction of Palestinian rights by calling this longstanding contradiction a tension that will be resolved when there is a Palestinian state alongside a Jewish-majority state. As if tomorrow Palestinians will gain their rights in the context of an expansionist Jewish state. As if Oslo is a more meaningful political paradigm than the Likud Party, which draws deeply on Zionist ideology and grows more rightwing by the minute.

But I was born in America, in the 20th century. In my lifetime Zionism has been a dangerous ideology for Palestinians and for the wider Middle East. Zionism has endorsed the Iron Wall strategy of militancy on Israel’s ever-moving borders. Zionism has created a Sparta, just as Hannah Arendt predicted that it would in 1948 when she saw that Israel was born in war, and saw the purging of Palestinian refugees from the Jewish state to be.

I consider myself a liberal anti-Zionist, or a non-Zionist (because the label is less confrontational to the Zionists I am trying to wean from their mistaken belief). I like liberal traditions of personal freedom in the United States, including the tradition of tolerance of religious and ideological claims I find preposterous. These liberal principles have guaranteed my freedom as a minority in the U.S. and granted me a darn good life, including jobs in the First Amendment business and marriage to someone who is not Jewish—a marriage that could not take place in Israel where there is no civil marriage.

I am an anti-Zionist because I reject the entire religious nationalist program: I don’t see a need for a Jewish state, I don’t see Jerusalem as my home any more than Kenya, where my people came from before the temple period. I don’t subscribe to the racial theory of the Jewish people. I take America at its word. I don’t like political separation of people on an ethnic basis and first class citizenship granted to one over the other; and I see the current militant and totalitarian aspects of Israeli society as flowing from a belief system, Zionism, the way that Soviet oppressions grew out of the Politburo’s interpretation of Communism.

I oppose Zionism, too, because the Israel lobby plays such a hurtful role in our foreign policy, and the Israel lobby is inherent in Zionism as it has evolved. From the beginning Zionism depended on the support of imperial powers. Herzl turned to the Kaiser and the Sultan, Weizmann turned to the British Prime Minister, Ben Gurion turned to the American president. “We became part of what is perhaps the most effective lobbying and fund-raising effort in the history of democracy,” Alan Dershowitz said. Yes, and that lobby helped generate the conditions of 9/11, the Iraq War, the murders of Robert Kennedy and Rachel Corrie and Furkan Dogan, and the hysteria about Iran.

The sooner we have this conversation, the greater diversity we will see in the Jewish community and American foreign policy. We can transform the special relationship and isolate Israel for human rights violations and pressure it to transform itself.

When we have this conversation, liberal Zionists will be pressed to decide what they believe in more, liberalism or Zionism. Leading writers like Matthew Yglesias, Eric Alterman, Richard Wolffe, Peter Beinart and Spencer Ackerman, who have kept their liberal and Jewish nationalist dishes spinning forever in the air alongside one another without having to deal with the fait accompli of that ideology—the cruel joke that Oslo has been for the Palestinians, the prison that is Gaza– will have to come down on the democracy side or the Jewish state side. And I am sure many will come down on the democracy side. I am sure that many will answer as I have, and say that they prefer a society where minorities have equal rights to one in which one group is privileged over another.

But we should not give them cover. We must have a real and open conversation in the American Jewish community for all to see. Are you a Zionist, and why? Do you feel unsafe in America? And what sort of unsafety have your beliefs created in a foreign land?

One Response to This Silence on Zionism is ‘Deafening and Damaging’