The Predicament of Palestinian Refugees in Lebanon 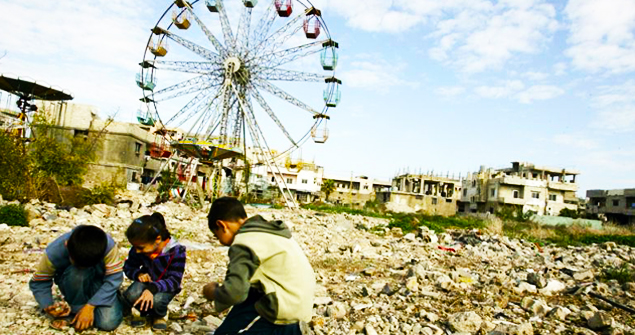 Within a few days of the June 15 incident, the outrage had spread and more refugees were killed. Fouad Muhi’edeen Lubany was killed on June 18, as a crowd of mourning refugees attempted to bury the first victim of Nahr al-Bared, near Tripoli in the north. Another victim of the violence was Khaled al-Youssef, who was shot in Ein al-Hilweh refugee camp, near Saida, about 30 miles south of Beirut. More Palestinians were reportedly injured, along with three Lebanese security officers.

The problem, however, will not disappear on its own. 450,000 United Nations-registered refugees live in Lebanon. They subsist in poverty, living in 12 concentration camp-like physical entities. They are denied basic rights and lack even nominal political horizons. Most of the refugees were forced out of Palestine between 1947-48 by Zionists militias, who later became the Israeli army. It was no accident that Nahr al-Bared was established in 1949. Since then, few if any substantial efforts have been made to remedy the numerous problems created by the violent dispossession.

Years later, Palestinian refugees have become embroiled in Lebanon’s existing conflicts – first by accident (since it happened that majority of the refugees are Sunni Muslims), and later by design (following the PLO’s departure from Jordan in the early 1970s). After the Israeli war on Lebanon in 1982 – accompanied by such infamous massacres as Sabra and Shatila, among others – the fate of the refugees worsened, reaching points of near complete neglect.

In the summer of 2007, the Lebanese army clashed with Fatah al-Islam, an extremist group which had earlier moved to Nahr al-Bared.  According to Amnesty International, “the violence caused considerable destruction to the camp, forcibly displaced the camp’s 30,000 residents and led to at least 400 deaths, including 42 civilians and 166 Lebanese soldiers.”

‘Considerable destruction’ is a mild way of putting it. The camp was literally “reduced to rubble,” as described in a report in the Lebanese Daily Star on June 22. Many media outlets reported the story as if it simply concerned another fight between an army and an al-Qaeda inspired group.

The stories barely acknowledged the fact that within the confines of the lethal fight there were hundreds of impoverished families, now mostly unemployed and homeless.

Five years have passed since Nahr al-Bared was destroyed. Yet many of its residents remain stranded between an old refugee status – as Palestinians who were forced out of or fled Zionist violence in Palestine in 1948 – and a new refugee status, fleeing from one refugee camp to another. This condition of old-new destitution is highlighted by, but not unique to Nahr al-Bared. It is a reality shared by many Palestinian refugees in Lebanon.

The multiple tragedies that struck the dwellers of Lebanon’s refugee camps throughout the years provide much needed insight into the nature of the Palestinian refugee problem in the country. They also offer obvious clues to its remedy. However much of the political discussion today is still devoid of any substance.

Lebanon-based US writer Franklin Lamb quoted a pledge on behalf of Army Commander General Jean Qahwaji, stating that a “through (and) a swift investigation will determine the perpetrators and prevent a similar incident from occurring in the future.” Lamb rightly comments: “Given past experience, few believe the investigation will be serious or even completed.”

The country’s Interior Minister conveniently discounted the obvious link between the clashes in Nahr al-Bared and Ein al-Hilweh, branding it a mere ‘coincidence’ (Akhbar al-Youm, June 20 as referenced by Lamb). Palestinian PLO and Fatah official, Azzam al-Ahmad told the Daily Star during a recent visit to Lebanon that “regional powers are exploiting the hardship of Palestinian refugees…to push their own agendas in Lebanon.” He insisted that these powers don’t include Syria.

Lebanon’s Palestinian refugees continue to be victimized by a bewildering political landscape and unmistakable discrimination by the state. Their treatment is often justified by the pretense that Palestinian refugees are temporary ‘guests’ in Lebanon. Now even third generation ‘guests’ of a UN-registered population of nearly 450,000 refugees are denied home ownership, inheritance of land or real estate. They are also barred from many professions.

The state of near complete economic stagnation has resulted in socioeconomic regression, placing Palestinian refugees in Lebanon at a very low standing with little hope for the future.

In a report released on June 20 to coincide with World Refugee Day, American Near East Refugee Aid (ANERA) resolved that “Palestinian refugee camps in Lebanon are considered the worst of the region’s refugee camps in terms of poverty, health, education and living conditions.” ANERA reported that two out of three refugees subsist on less than $6 a day, and that discrimination against them is expressed in multiple areas ranging from health care to housing.

It is important to note Israel’s role in the perpetual suffering of Palestinian refugees in Lebanon – as everywhere else. But extending this awareness to include the inhumane treatment of Palestinian refugees in Lebanon no longer suffices. As in the case of refugees the world over, Palestinians must be repatriated to their homes and compensated for their pain, suffering and multiple losses. Until that goal is achieved, refugees must be treated with dignity and respect – regardless of the political calculation of their host countries.

The predicament of Palestinian refugees in Lebanon must be handled with decisiveness and urgency. It is a responsibility that ought to be shared between the Lebanese government, the Palestinian leadership, the Arab League and the United Nations. Any more neglect and the potential crisis could morph into a full-fledged conflict.

One Response to The Predicament of Palestinian Refugees in Lebanon