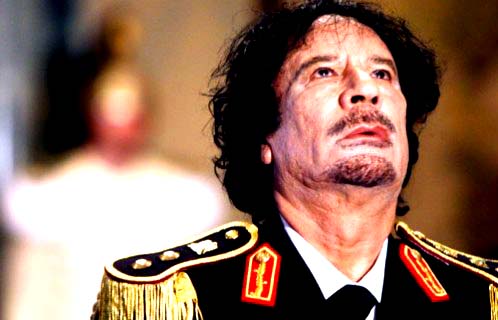 The younger Gaddafi has invited dozens of foreign journalists to the Libyan capital and challenged them to find any evidence of regime brutality.

Meanwhile Colonel Gaddafi has given a somewhat bizarre interview in which he claimed his people love him and would die to protect him.  He was excited enough to actually say that in English.

The situation in Libya has turned into a drawn out crisis.  The anti-regime forces are consolidating their positions mainly in the east of Libya while the King of Kings of Africa is hunkered down in Tripoli and it will take a Herculean effort to dislodge him.

The West, led by the United States, has said “all options are on the table”, meaning military intervention.  In my view the other interpretation of this statement is right now we have no idea what the hell we’re going to do.

Today I heard an interview with an anti-Gaddafi protester who threatened that “we will fight them like we fight him”, them being the possibility of foreign military intervention in the country.  Intervening militarily in Libya would be an extremely ill-advised move because there are already voices in the Arab world calling this a conspiracy and a plot and Gaddafi is gaining sympathizers where virtually none existed a week ago.

So there you go.  The situation is quickly going nowhere.

If Tripoli rises against Gaddafi and members of the international media are there to record it then the Libyan leader is in trouble.  That’s the gamble Saif* advised his father to take, hoping that large injections of cash and subsidies will pacify the capital.  On the other hand if Tripoli remains generally calm then no amount of diplomatic maneuvering can raise the stakes against Gaddafi.

What I also find interesting is that Libya’s oil resources are believed to be much larger than its proven reserves because only 25% of the country’s territory has been explored.  Hmmm..  No, I’m not insinuating anything.  Yet.

So where does that leave us?  The Libyan opposition cannot take Tripoli by force, it doesn’t have the firepower and even if it did then it would mean thousands upon thousands of innocent deaths.

On the other hand Colonel Gaddafi has lost a major part of his country which he simply cannot regain.

We are potentially looking at a redrawing of the map of Libya.

As a matter of fact I think there’s a very good chance that we are looking at a redrawing of the map of the Middle East.  That is the implication I touch upon in an analysis of the changes in the region  which I hope to post soon.

* The London School of Economics has announced that it it will investigate charges that Saif Gaddafi plagiarized parts of his PhD thesis.  Problem is Saif studied at LSE from 2003 to 2008 and we’re now in 2011, and the prestigious university accepted a £1.5m donation from Saif!

According to the BBC, “Saif Gaddafi’s examiner, the renowned economist Lord Desai, says that he had earned the PhD, and that the LSE had been right to accept his donation. His only regret… was that Saif Gaddafi had failed to learn enough about democracy:

“I read the thesis, I examined him along with an examiner, he defended his thesis very, very thoroughly, he had nobody else present there, and I don’t think there’s any reason to think he didn’t do it himself.”

“This is over-egging the pudding. The man is evil enough – you don’t have to add that he’s a plagiarist as well.”